Non-Metro Areas Gained About as Much as Metro Areas in 2015, American Community Survey Data Indicate

Contrary to some news reports that Census data released this week show that people in rural areas were left behind in 2015 and failed to make economic progress, additional Census data released yesterday as part of the American Community Survey (ACS) show that median household incomes increased and poverty fell essentially at the same pace in non-metropolitan (often loosely termed “rural”) areas in 2015 as they did in metropolitan areas.

On September 13, the Census Bureau released information from the Current Population Survey that seemed to indicate that people living in non-metro areas (technically labeled as residing “outside metropolitan statistical areas”) did not benefit from the economic progress in 2015.  The report said that in non-metro areas:

The main CPS publications released on September 13 were affected by a major change in 2015 in the definition of metro and non-metro areas.  The CPS data for 2015 reflect full adoption of an updated set of Office of Management and Budget definitions of metro versus non-metro areas.  The changes in poverty and income between 2014 and 2015 appear to have been affected by this change in geographic boundaries.  (That adoption was partially underway in 2014, so 2013-2014 comparisons may be impaired as well.)  This change in definitions suggests that using the CPS estimates to compare non-metro households in 2014 to non-metro households in 2015 provides an apples-to-oranges comparison.

The Census Bureau’s website includes a cautionary note about using the metro/non-metro data, leading Census to exclude some backup tables that it typically provides.  It states:

For the 2015 CPS ASEC [Annual Social and Economic Supplement] geographical mobility package, the metropolitan mobility detailed tables 14 through 16 are not included.  The U.S. Census Bureau is currently transitioning to a new sample design for the CPS based on the 2010 Census.  During this period, the CPS estimates are based partly on the 2000 sample design and partly on the new 2010 sample design.  As a result, metropolitan-nonmetropolitan estimates from the 2015 ASEC are based on samples of two different designs, and do not accurately reflect the actual respective populations and will not be provided during this period [emphasis added].[1]

Examining the total population of non-metro areas according to the CPS gives some sense of the magnitude of the change in definition.  CPS tables indicate that, prior to the revision, the non-metro population of the United States was consistently between 47 million and 48 million from 2005 to 2013.  After rising from 47.8 million in 2013 to 50.0 million in 2014, it then fell dramatically to 44.4 million in just one year in 2015.  It’s very likely that the substantial drop largely reflects the sharp change in boundaries in the CPS.

By contrast, the American Community Survey released yesterday did not noticeably change its definition of non-metro areas in 2015; as a consequence, under the ACS, the same number of people (44.4 million) lived in non-metro areas in both 2014 and in 2015.  The much larger sample size of the ACS also makes it a more reliable source of information for non-metro areas, relative to the CPS.

As Table 1 shows, data on the ACS website indicate that non-metro households gained considerably from economic progress last year, and to a similar degree as metropolitan households.  From 2014 to 2015:

Note: Median income figures are adjusted for inflation and expressed in 2015 dollars.

The above poverty data, whether from the CPS or the ACS, reflect the official poverty measure, which doesn’t account for most government benefits or adjust for cost-of-living differences by geographic area.  Under the official measure, poverty is much higher in non-metro areas than in metro areas.  But under the Census Bureau’s Supplemental Poverty Measure (SPM), which accounts for most government benefits and adjusts for local cost-of-living differences, the poverty rate is actually lower in non-metro areas (13.2 percent) than in metro areas (14.5 percent).  Although some analysts do not fully agree with the SPM’s approach to geographic adjustment, many analysts agree that either those adjustments or another, similar approach makes sense. 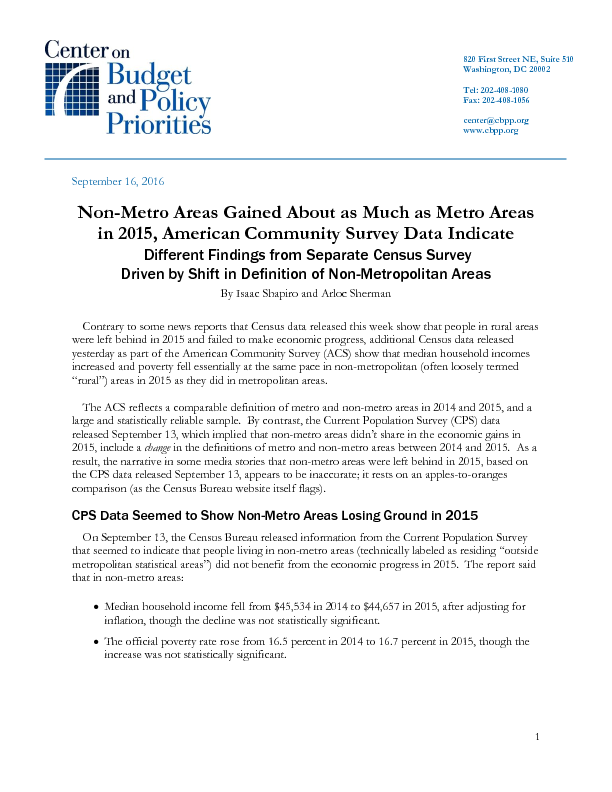