Social Security’s financial outlook reflects the projected balance between its revenues (primarily payroll taxes paid by active workers) and spending (largely benefits to retired and disabled workers, their dependents, and survivors of deceased workers).  Immigration affects both sides of this ledger.  Additional immigrants increase the size of the working-age population, the number of workers in jobs covered by Social Security, and the amount of payroll taxes collected.  Eventually, many of these immigrants will become eligible for Social Security and receive cash benefits.  And the children and grandchildren of immigrants will affect the population, the economy, and the ratio of workers to beneficiaries long into the future.[2]  Under the intermediate assumptions of Social Security’s trustees, virtually all of the projected growth in the U.S. labor force for the next 50 years can be attributed to immigrants and their U.S.-born offspring.[3]

The effects of immigration policies on Social Security and the rest of the federal budget depend on the characteristics and behavior of past and future immigrants.[4]  As a group, immigrants differ from the native-born population in terms of their average age, educational attainment, income, labor-force participation, fertility, rate of emigration, and other socioeconomic characteristics.  Immigrants also differ from each other.  For example, although immigrants are much more likely than natives not to have completed high school, they are also more likely to hold advanced degrees.[5]

Because immigrants are so diverse, it is possible to construct hypothetical — but unrealistic — scenarios in which immigration has either very unfavorable or very favorable effects on Social Security’s finances.  Social Security benefits are progressive and replace a larger portion of previous wages for people with low earnings than for those with high earnings.  If all immigrants were very low-wage workers who would receive benefits that significantly exceed their contributions and if they had few children, immigration could have an adverse or only slightly favorable effect on the solvency of Social Security.  Conversely, if immigrants were all highly skilled and highly paid and had many children, immigration could be very beneficial to Social Security.  Neither of these extreme outcomes is at all likely.

As a result of these changes, undocumented workers are unlikely to receive Social Security benefits based on the wages they earned while undocumented, even if they and their employers paid Social Security payroll taxes.  Many undocumented workers use a Social Security number that does not match their name.  To receive credit toward benefits, they would have to establish that the reported earnings belonged to them.  “While credit for such work is possible,” according to Social Security’s chief actuary, “and would be more likely with certain changes in immigration laws, proof of ‘ownership’ of earnings during periods of residence without documentation is difficult and so such credit will be unlikely in any case.”[11]

[2] Joel Feinleib and David Warner, The Impact of Immigration on Social Security and the National Economy, Social Security Advisory Board, Issue Brief No. 1, December 2005. 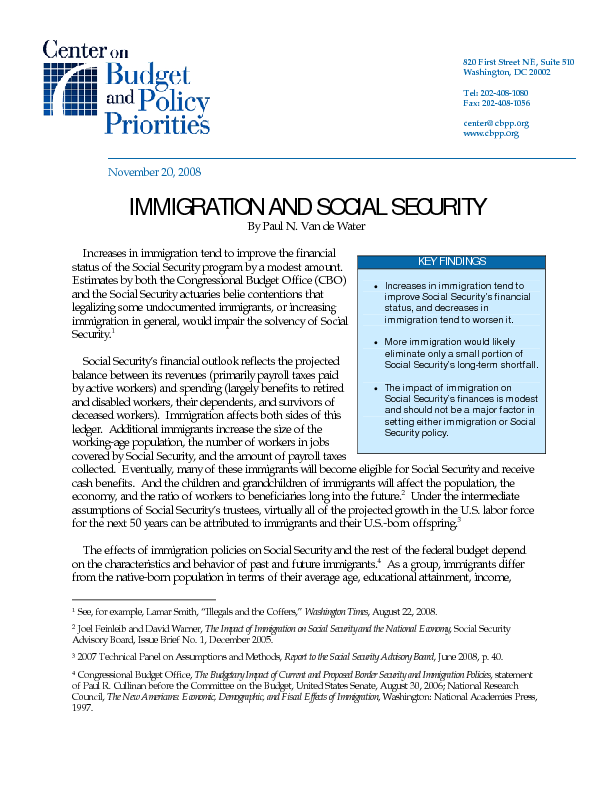