Proponents of adopting a tight TABOR limit in Florida sometimes claim that Florida would not experience the same negative effects on the economy and public services that occurred in Colorado. They argue that Colorado’s problems stemmed entirely from one feature of its TABOR, the so-called “ratchet.” (The ratchet, part of the formula for determining the state’s annual spending limit, makes it extremely difficult for state services ever to recover from an economic downturn. See box on next page.) Since the Florida proposals do not include the “ratchet” feature, proponents say that comparisons to Colorado’s experience of sharp declines in public services and deterioration in its business climate are not applicable.

These claims are inaccurate. Fixing the ratchet would not prevent TABOR from causing public services to deteriorate. It is the basic TABOR formula, not the ratchet, that undermines states’ ability to fund services. This is evident from the fact that public services in Colorado declined significantly before the 2001 recession began, and thus before the ratchet could have had any effect. For example, between 1992 (when TABOR took effect) and 2001, Colorado fell from 35th to 49th in the nation in K-12 education spending as a percentage of personal income and from 23rd to 45th in access to prenatal care, a sign of funding shortages in local health clinics.

What Is a "Ratchet"?

The core of Colorado’s TABOR is a formula that limits the amount of revenue that can be spent each year. Under this formula, revenues may not grow faster in a given year than the sum of the inflation rate and the rate of population growth. The base for calculating this allowable growth is the lower of two figures: actual revenues in the previous year, or the amount of revenues permitted by TABOR in that year.

In a recession, revenues often stagnate or decline and thus fall short of the TABOR limit for that year. Under the TABOR formula, that lower revenue level becomes the base for calculating allowable revenue growth in all subsequent years.

As a result, it could take a state several years just to return to the level of allowable revenue that existed in the year before the recession. This “ratchet effect” (so called because the state’s revenue limit is ratcheted down whenever revenues fall short of the TABOR limit) means that a state would have to continue making deep reductions in public services even as the economy recovers and revenue collections return to normal growth.

TABOR proposals in Florida, including CP 45 being considered by the Tax and Budget Reform Commission and the proposal put forth by the House Government Efficiency and Accountability Council, would allow revenues to grow from the amount of revenues permitted by TABOR in the previous year. Thus these proposals would not create a ratchet effect.

Colorado’s TABOR is the most restrictive type of tax and expenditure limit (TEL) in the nation. It is a constitutional amendment that restricts annual growth in state and local revenues to the rate of growth of population plus the inflation rate for consumer goods. It also requires voter approval to override the revenue limits and requires that revenues in excess of those limits be refunded to taxpayers.

TABOR’s “population-plus-inflation” formula prevents a state from collecting the amount of revenue needed each year to maintain existing public programs and services; as a result, it progressively shrinks state budgets and public services over time. This is because the formula is an inaccurate measure of the costs facing state governments. The cost of health care, education, corrections, and other areas of government generally grows more rapidly than the cost of consumer goods. Moreover, certain segments of the population — such as schoolchildren and the elderly — require more public services than others. When these segments grow more rapidly than the population as a whole, the cost of government grows more rapidly than the TABOR limits allow.[1]

Unlike the TABOR formula, which each year reduces a state’s ability to provide adequate public services, a ratchet component of a TABOR formula comes into play only in the aftermath of recession, as explained in the box above.

The extent to which TABOR shrinks services even without the operation of a ratchet can be seen by the deterioration in services in Colorado between 1992 (when TABOR took effect) and 2001 (before the recession began to depress state revenues, and thus before the ratchet had any effect): Thus, even before the ratchet had any effect on Colorado, the TABOR formula had seriously undermined the state’s ability to provide adequate public services.[3]

Further evidence that TABOR’s fundamental problem is its basic formula rather than the ratchet can be seen in the graph [on the next page], which shows what would have happened if a TABOR without a ratchet had been in effect in all states since 1990. Between 1990 and 2004, state spending averaged 6.9 percent of the gross domestic product (GDP). Had a TABOR with no ratchet been in place in all states starting in 1990, state spending would have declined steadily as a share of GDP, from 6.5 percent in 1990 to 5.4 percent in 2004.[4] In 2004, states would have had $158 billion (20 percent) less ability to support services than they actually had. Put another way, if all states had had a TABOR without a ratchet, they would have experienced a deterioration in public services that is similar to what Colorado experienced prior to the recession.

An analysis of the effect CP 45 would have on Florida showed that if the limit had been effective in Florida beginning in FY 2002, capped state revenues for the FY 2003 – 2007 period would have been $5.7 billion less than the actual revenue limit. Florida would have faced a $3.7 billion, or nearly 10 percent, shortfall in the 2005-2006 budget year alone — nearly the equivalent of Florida’s entire corrections and public safety spending.[5] These shortfalls are the result of the TABOR formula in the Florida TABOR proposals, not the operation of a ratchet.

TABOR’s main problem is its “population-plus-inflation” formula, which starves a state over time of the funds it needs to maintain current services for residents and severely limits the state’s ability to meet new challenges as they emerge. The ratchet effect exacerbates the funding shortfall caused by TABOR, but it comes into play only in the aftermath of a recession, so fixing the ratchet would not fix the problems inherent in the TABOR formula.

[2] Center on Budget and Policy Priorities calculation of National Education Association and Bureau of Economic Analysis data. Current expenditures provide funding for the operating costs of K-12 schools. Expenditures include items such as salaries, fixed charges, transportation costs, school books, materials, and energy costs but do not include capital expenditures and interest payments on debt.

[5] Iris J. Lav, The Tax Commission’s TABOR: A Path to Deterioration in Florida, 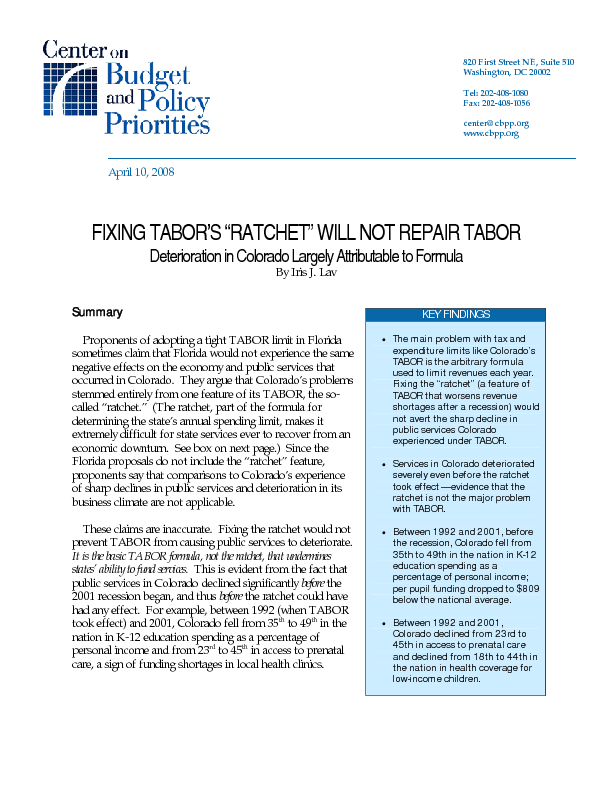