CBO Shows Ryan Budget Would Set Nation on Path to End Most of Government Other Than Social Security, Health Care, and Defense By 2050

House Budget Committee Chairman Paul Ryan’s new budget plan specifies a long-term spending path under which, by 2050, most of the federal government aside from Social Security, health care, and defense would cease to exist, according to figures in a Congressional Budget Office analysis released today. [1]

The CBO report, prepared at Chairman Ryan’s request, shows that Ryan’s budget path would shrink federal expenditures for everything other than Social Security, Medicare, Medicaid, the Children’s Health Insurance Program (CHIP), and interest payments to just 3¾ percent of the gross domestic product (GDP) by 2050.  Since, as CBO notes, “spending for defense alone has not been lower than 3 percent of GDP in any year [since World War II]” and Ryan seeks a high level of defense spending — he increases defense funding by $228 billion over the next ten years above the pre-sequestration baseline — the rest of government would largely have to disappear.  That includes everything from veterans’ programs to medical and scientific research, highways, education, nearly all programs for low-income families and individuals other than Medicaid, national parks, border patrols, protection of food safety and the water supply, law enforcement, and the like.  (In the same vein, CBO also notes that spending for everything other than Social Security, Medicare, Medicaid, and interest “has exceeded 8 percent of GDP in every year since World War II.”[2])

In addition, CBO shows that total federal spending — includingSocial Security, interest, and health care — would fall to 16 percent of GDP by 2050 under Ryan’s budget path, a target specifically included in the Ryan budget resolution.  This would be the lowest level since 1950, when Medicare, Medicaid, most federal funding for education, highways, and environmental protection, and various other significant federal activities did not exist.

The Ryan budget would start down this path immediately, with severe cuts in non-defense discretionary programs over the next ten years.  It would cut funding for these programs by nearly $1.2 trillion below the austere funding caps that Congress enactedlast August (by 2021, funding would be more than 22 percent below what it would be under the cap) — and by $800 billion below the level to which non-defense discretionary funding would be shrunk if sequestration were allowed to take effect.

Grover Norquist, president of Americans for Tax Reform and one of Washington’s most influential anti-tax conservatives, told National Public Radio in 2001, “I don’t want to abolish government. I simply want to reduce it to the size where I can drag it into the bathroom and drown it in the bathtub.” The CBO report suggests that other than for Social Security, defense, and health, Chairman Ryan has a similar vision.

Equally stunning are CBO’s findings about the impacts of the Ryan plan on programs to enable Americans to secure health-care coverage.  CBO finds that the Ryan plan would cut programs to help low- and middle-income people afford health insurance — Medicaid, CHIP, and the Affordable Care Act’s subsidies to help near-poor and moderate-income families afford insurance — by more than 75 percent by 2050, with the bulk of the cuts coming from Medicaid.  Spending on these programs would be slashed from between 4¼ and 4½ percent of GDP in 2050 under current policies to just 1 percent of GDP.

As CBO explains, the magnitude of the cut in Medicaid and CHIP “means that states would need to increase their spending on these programs, make considerable cutbacks in them, or both.  Cutbacks might involve reduced eligibility for Medicaid and CHIP, coverage of fewer services, lower payments to providers, or increased cost-sharing by beneficiaries — all of which would reduce access to care.”[3]

CBO also observes that the Ryan plan’s elimination of subsidies to help people with modest incomes purchase health coverage (as part of the plan’s repeal of all coverage expansions under the health reform law) means that “the number of people without health insurance would be much higher” than under current law.[4]

Leaving 65- and 66-Year-Olds Without Health Coverage

The CBO analysis states that the Ryan plan would raise the age at which people become eligible for Medicare from 65 to 67, even as it repeals the health reform law’s coverage provisions.  This means 65- and 66-year-olds would have neither Medicare nor access to health insurance exchanges in which they could buy coverage at an affordable price and receive subsidies to help them secure coverage if their incomes are low.  This change would put many more 65- and 66-year-olds who don’t have employer coverage into the individual insurance market, where the premiums charged to people in this age group tend to be extremely high — thereby leaving many of them uninsured.  People of limited means would be affected most harshly because they would not be able to afford private coverage.  In addition, many 65- and 66-year-olds with a pre-existing medical condition would not be able to purchase coverage at any price.

The Ryan plan would also replace Medicare’s guarantee of health coverage with premium-support payments to seniors (starting with new beneficiaries in 2023) that they would use to buy coverage from private insurance companies or traditional Medicare.  The growth in these payments each year would be limited to the percentage increase in per capita GDP plus one-half percentage point.  For more than 30 years, however, health care costs per beneficiary in the United States have risen an average of about two percentage points per year faster than GDP per capita.  CBO thus projects that under the Ryan budget, federal Medicare expenditures on behalf of an average 67-year-old beneficiary would, by 2050, be 35 percent to 42 percent lower than under current law.

Under the Ryan budget, moreover, Medicare would no longer make payments to health care providers such as doctors and hospitals; it would instead provide premium-support vouchers to beneficiaries that they’d use to help buy coverage from private insurance companies or traditional Medicare.  Therefore, the only way to keep Medicare cost growth within the GDP +0.5 percentage-point target would be to limit the annual increase in the government’s premium-support vouchers.  That would very likely cause the vouchers to grow more slowly than health care costs — and hence purchase less coverage with each passing year.  Over time, more costs would likely be pushed on to beneficiaries.

The Ryan plan would replace Medicaid with a block grant that would grow each year with inflation and U.S. population growth, or more than 3.5 percentage points less than current projected annual growth in Medicaid (which is influenced by the growing number of elderly beneficiaries as the population ages) and significantly below the cost growth that the Ryan budget would allow in Medicare.  Chairman Ryan today defended the plan’s severe Medicaid cuts by claiming that “the program’s current financing structure has created rapidly rising costs that are nearly impossible to check.”[5]  The claim that Medicaid’s financing structure is driving the rising costs is, however, false.  Research shows that Medicaid costs substantially less per beneficiary than private insurance does (because Medicaid pays providers significantly less and has lower administrative costs) and that per-beneficiary costs have been rising more slowly in Medicaid than in the private sector for a number of years.[6]  (See Figures 1 and 2.) 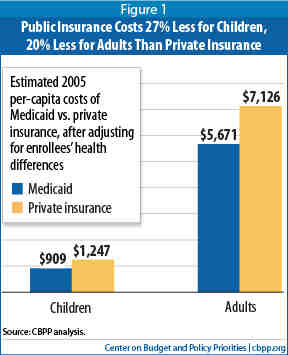 For example, the Urban Institute estimated that a similar Medicaid block grant proposal that Chairman Ryan included in his budget last year would lead states to drop between 14 million and 27 million people from Medicaid by 2021 (on top of the coverage losses resulting from repealing the health reform law’s Medicaid expansion).[7]

[2] Both quotations in this paragraph are on page 10 of the CBO report.