House Minority Leader John Boehner on September 8 issued a proposal to cut funding for non-security discretionary programs and to extend all of the Bush tax cuts for two years. He portrayed the proposal as a bipartisan compromise. Closer examination shows, however, that this is a radical plan that reflects deeply conservative ideology.

Analysis of the Proposed Cut in Non-Security Discretionary Funding

Rep. Boehner has proposed limiting total discretionary funding for fiscal year 2011 (which begins October 1) to $1.029 trillion (the limit apparently would not apply to funding for the wars in Iraq and Afghanistan), while setting the overall funding level for programs funded by the defense, homeland security, and military construction and veterans appropriations bills at the same level that President Obama’s 2011 budget requests for those programs. According to CBO, the President proposes $651 billion for these “security” parts of the budget. This leaves $378 billion for “non-security” discretionary funding under the Boehner plan.[3]

In materials presenting his proposal, Rep. Boehner claims that “excessive government spending is crowding out the private economy.” This contention makes little sense at the present time, when there are large numbers of unemployed workers and substantial idle productive capacity in the private sector and when financial investors are willing to accept very low yields in return for the safety afforded by U.S. Treasury securities.

For government spending to crowd out private spending, the workers, factories, and machines needed to meet the demand generated by the government spending would have to be diverted from other productive activities. That can occur in a high-employment economy with no economic slack. But under current conditions, the situation is different. For example, when the government provides additional unemployment insurance (UI) benefits to workers struggling to find a job, businesses are benefitted rather than harmed: the benefits increase consumer demand for goods and services and thereby enable businesses to put unemployed workers back to work and put idle capacity back into production (or to refrain from cutting workforces and production even further).

Neither the Federal Reserve nor financial investors buy Rep. Boehner’s argument. If the Federal Reserve did, it would be tightening monetary policy now by raising interest rates to forestall higher inflation, which would arise if government spending were generating excess aggregate demand that put a strain on the country’s productive capacity. The truth, of course, is that the Fed is much more concerned about economic weakness right now than it is about inflation and stands ready to ease monetary policy further, not tighten it. Similarly, the appetite for U.S. Treasury securities among financial investors would not be there if they feared inflation or higher interest rates or if they were more concerned about the impact of current government spending on future deficits than about how weak the economy is right now.

This represents a 21.1percent cut from the CBO baseline for non-security discretionary funding — that is, from the FY 2010 funding levels, which do not include any Recovery Act funding since that funding was enacted in 2009, as adjusted for inflation. [4] It also represents a 21.7 percent cut from the levels that President Obama has requested for these programs. (The Obama request is very close to the CBO baseline level.)[5]

Rep. Boehner’s document shows a $99 billion cut relative to President Obama budget proposal. Actually, the cut that would be required is about $105 billion, because the Boehner figures fail to fully reflect the cost of providing funding to maintain the basic Pell Grant level in 2011. [6]

Erroneous Claim of an 85 Percent Increase

Rep. Boehner claims that non-security funding has increased 85 percent above the 2008 level over the last two years. This statement is false. It appears to be drawn from a House Budget Committee Republican press release that added the Recovery Act discretionary funding provided for 2009 to nondefense discretionary funding provided for 2010 and then compared the total to the 2008 funding level. The conclusion reached in that press release is invalid because 2009 and 2010 funding cannot be added together and portrayed as the current funding level.[7]

Non-security discretionary funding has indeed increased since 2008, but the rise is far smaller than Rep. Boehner contends. The non-security funding level for 2010 is 19.5 percent above the 2008 level before adjusting for inflation (excluding emergency funding in both years), and 17.5 percent above that level after adjusting for inflation. Given the severe weakness in the economy in 2010 as compared to 2008, and the accompanying drop in consumer, business, and state and local government purchases of goods and services, this increase in federal non-security discretionary funding seems reasonable and economically sound. It also may be noted that many believed the 2008 funding levels to be less than adequate in certain areas.

[1] This revised paper reflects further analysis (since we issued the original paper on September 10) regarding Rep. Boehner’s definitions of “security” and “non-security” funding. While the materials he issued are ambiguous, Rep. Boehner appears to be defining these categories on the basis of appropriations subcommittee jurisdictions, in which case the “non-security” category would include approximately $22 billion in defense funding for the nuclear weapons programs of the Department of Energy and defense activities of the FBI. The original paper noted that this was one interpretation of Rep. Boehner’s approach, but focused primarily on an alternative approach that defines “security” and “non-security” funding on the basis of budget functions, which would exclude all defense spending — including the above-mentioned $22 billion — from the non-security category.

However, there is only a trivial difference between the two approaches in the estimated effects of the Boehner proposal on funding for non-security programs. Under the subcommittee jurisdictions approach, the proposal would require a 21.1 percent cut in non-security programs, while under the budget functions approach, it would require a 22.4 percent cut in these programs. (The required cut is smaller under the former approach because the base level of funding for “non-security” programs is larger if that category includes some defense funding.)

[2] This does not count the change in funding levels from 2009 to 2010, when a larger reduction occurred, because that reduction merely reflected a return to more normal funding levels following the very large spike in 2009 resulting from temporary funding provided by the Recovery Act.

[3] Although Rep. Boehner says he wants to limit non-security discretionary funding for 2011 to the amount that was provided for 2008, the $378 billion allowed for such spending under his plan is about $8 billion less than the non-emergency funding that was actually provided for such programs in 2008. The discrepancy apparently arises from the fact that the estimated $378 billion cost of non-security appropriations bills for 2008 included $8 billion in savings in mandatory programs that were included in those bills. As a result, the actual level of non-emergency funding provided for non-security discretionary programs for 2008 was $8 billion higher than the estimated cost of the bills, or $386 billion.

[4] The CBO baseline projections are adjusted to exclude projections of emergency appropriations for 2010 and reflect the funding needed to maintain the basic Pell Grant award for 2011 at the same level as in 2010. (Under the baseline rules, CBO assumes continued Pell discretionary funding at the same level as appropriated for 2010, adjusted for inflation — $17.7 billion. The baseline amounts cited here are adjusted to reflect CBO’s estimate that maintaining the Pell Grant award at the same level as in 2010 will require funding of $23.2 billion in 2011.) Without this adjustment, the baseline is $5.5 billion lower, and the cut below the CBO baseline level that would be required to comply with the Boehner limit would be 20.2 percent instead of 21.1 percent.

[5] It may be noted that the definition of non-security funding used in the President’s budget is different from the one used by Rep. Boehner. The President excluded funding for international programs as well as funding for defense, veterans, and homeland security.

[6] The President’s budget proposed making the Pell Grant program fully mandatory and therefore did not request any 2011 discretionary funding for Pell Grants. Congress decided, however, to leave the basic Pell Grant award as a discretionary program. (Congress enacted a modest mandatory add-on award in this year’s health reform and education reconciliation legislation.) Rep. Boehner apparently recognized the need to adjust the President’s discretionary request to reflect this congressional decision, but his adjustment to the 2011 funding level that the President has requested understates the amount needed to carry out the President’s policies. His adjustment appears to equal only the 2010 Pell Grant appropriation level, adjusted for inflation, not the amount CBO estimates is needed to maintain the basic Pell Grant award at the 2010 level as Congress assumed would happen when it created the add-on award and as the President has proposed. With this further $5.5 billion adjustment, the President’s request for total discretionary funding (excluding funding for the wars in Iraq and Afghanistan) equals $1.134 trillion instead of the $1.128 trillion cited in Rep. Boehner’s materials.

[7] The HBC conclusion would be invalid here in any case because it was based on an analysis of nondefense spending, which excludes all defense spending and includes funding for homeland security and veterans programs that is excluded from Rep. Boehner’s definition of non-security funding. 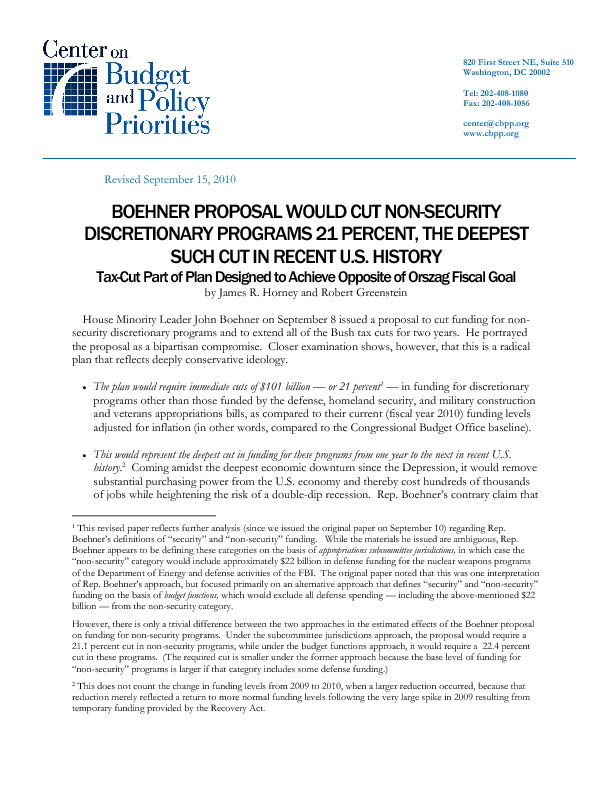