Commentary: Next Round on the Deficit

Big Dangers Ahead for the Economy, the Budget, and Low-Income People

In recent days, policymakers, pundits, and the media have debated whether the “fiscal cliff” budget deal was a victory or defeat for the President or congressional Republicans, progressives or conservatives, rich or poor, the economy or the deficit — you name it.  Most of the commentary is unpersuasive, however, for one basic reason:  the fiscal cliff deal is only one stage in a broader budget battle, and you can’t render a legitimate judgment on that effort until the next stage — which includes the scheduled across-the-board spending cuts known as “sequestration” and, especially, the need to raise the debt limit — is completed.

What’s important at this point is not assessing winners or losers but, instead, understanding what lies ahead.  That’s because what lies ahead is truly frightening.  Indeed, it could (though it doesn’t have to) produce outcomes that are far more damaging to the economy, sound fiscal policy, and low-income and vulnerable Americans than anything that policymakers and experts feared from the fiscal cliff.

So, let’s look ahead to the next 60 days and their potentially monumental ramifications for our country, our economy, and our people.

The Big Challenges and Threats

Entering the fiscal cliff negotiations, there were two main barriers to achieving deficit reduction in an equitable and balanced manner that honors the principle, as enunciated by the National Commission on Fiscal Responsibility and Reform (“Bowles-Simpson”) and reflected in major deficit-reduction deals of recent decades, that deficit reduction shouldn’t harm low-income and vulnerable Americans or increase poverty — and that doesn’t disrupt the economy:

Moreover, the Boehner rule would require the most radical transformation of government in nearly a century; if policymakers enacted all of the cuts in the severe, House-passed budget of House Budget Committee Chairman Paul Ryan, they would still eventually fall short of adhering to the Boehner rule.  They would have to eliminate more and more of the basic functions of government over time.

Republicans needed the agreement of President Obama and the Democratic-run Senate in order (1) to extend President Bush’s tax cuts (which were scheduled to expire at the end of 2012), including any tax cuts that Republicans could salvage for people who were making over $250,000 a year, and (2) to preserve as much as they could of the estate-tax break for the nation’s wealthiest estates that Republican leaders extracted from the President in their negotiations over the year-end tax bill of 2010.

The White House’s challenge was to use this leverage to broker a larger deal that contained enough deficit reduction to stabilize the debt over the coming decade, secured an adequate revenue contribution toward that goal (one that extended well beyond the revenues generated just from letting the Bush tax cuts expire for people making over $250,000), and raised the debt limit for at least several years.  That’s what the President tried to achieve in his December negotiations with Speaker Boehner.

At one point, Obama and Boehner appeared close to agreement, with Obama close to achieving his goals.  But then Boehner, pressured by other House Republicans, blew up the negotiations and opted for “Plan B.”

After Plan B’s demise, negotiations resumed — but on a very different playing field.  Gone was any discussion of raising the debt ceiling or of a larger deficit-reduction package.  Instead, the two sides opted for a deal that raises income, capital gains, and dividend taxes only on couples making over $450,000 ($400,000 for singles); limits itemized deductions and phases out personal exemptions for couples making over $300,000 ($250,000 for singles); makes permanent most of the estate-tax break originally enacted in 2010; extends improvements in the Child Tax Credit and the Earned Income Tax Credit for low-income working Americans, and in the American Opportunity Tax Credit for middle- and lower-income college students, for five years;[4] extends federal emergency unemployment insurance benefits for a year; and delays sequestration for two months.  All told, the deal makes permanent 82 percent of the Bush tax cuts.[5]

Consequently, the playing field for the next round is very different.  It’s a terrain filled with land mines and enormous danger.

The nation faces three related and very daunting challenges in the next round, all of which will play out over the next two months.

Why Low-Income People Are at Heightened Risk

Some Democrats dismiss the threat that the Boehner rule poses, saying that Republicans ultimately will back off of it because they won’t publicly identify the specific program cuts they would make to produce the savings that would raise the debt ceiling for a reasonable period of time.  That view, alas, is mistaken.

To be sure, Republican congressional leaders seem unwilling to propose specific cuts in the two main, popular middle-class entitlement programs — Medicare and Social Security — that would produce large savings over the next ten years.  They want Democrats to propose such cuts, or at a minimum, they want to find a way to put some Democratic fingerprints on them.

But, Republican leaders appear more than willing to specify deep cuts in two other parts of the budget — core entitlements for low-income Americans, like Medicaid and SNAP (formerly known as food stamps), and the annual caps on funding for non-defense discretionary programs.[10]   The Ryan budget featured trillions of dollars of cuts in these two areas.[11]   House Republicans may well try to pass legislation in February to raise the debt limit for a year or so, accompanied by cuts primarily in low-income assistance programs and in the caps on non-defense discretionary programs.  They will likely re-pass, in the new Congress, the legislation that they passed twice in the last Congress (most recently on December 20) to cancel the first year of sequestration and replace it with spending cuts that hit low-income programs disproportionately.[12]

These battles, just starting, will be brutal.  Attacks that disparage or demonize programs for low-income and vulnerable Americans may escalate in the weeks ahead in an effort to help lay the groundwork for this strategy.

It’s not clear how policymakers will resolve these showdowns.  The President’s ability to tie an extension of various Republican-backed tax cuts to an agreement on a larger balanced package — one that also raises the debt limit and averts sequestration — now is gone.  How the President can secure needed Republican votes in the Senate and House for measures that raise additional revenues — and for measures that raise the debt limit outside of the harsh and regressive confines of the Boehner rule — is very unclear.

But facile assumptions that President Obama will simply roll over in the face of these pressures seem quite unrealistic.  So, an extremely high-stakes confrontation — one that could culminate in an actual default, a government shutdown, or even a constitutional crisis — is definitely not out of the question.

What lies ahead will likely dwarf the fiscal-cliff dramatics that the nation has just witnessed.  Our leaders, our system of government, and the patience and wisdom of the American people will be severely tested.  And, for no one will the stakes — and the risks — be higher than for the tens of millions of our least fortunate citizens, those who lack the luxury of well-connected lobbyists and the access that big campaign contributions bring to help protect them on Capitol Hill in the dangerous weeks ahead.

[2] Richard Kogan, “$2 Trillion in Deficit Savings Would Achieve Key Goal: Stabilizing the Debt Over the Next Decade,” Center on Budget and Policy Priorities, November 1, 2012,

[6] Robert Greenstein, “The Next Act: Further Deficit Reduction Must Include a Mix of Revenues and Spending Cuts,” Center on Budget and Policy Priorities, Off the Charts blog, January 2, 2013, http://www.offthechartsblog.org/the-next-act-further-deficit-reduction-must-include-a-mix-of-revenues-and-spending-cuts/. 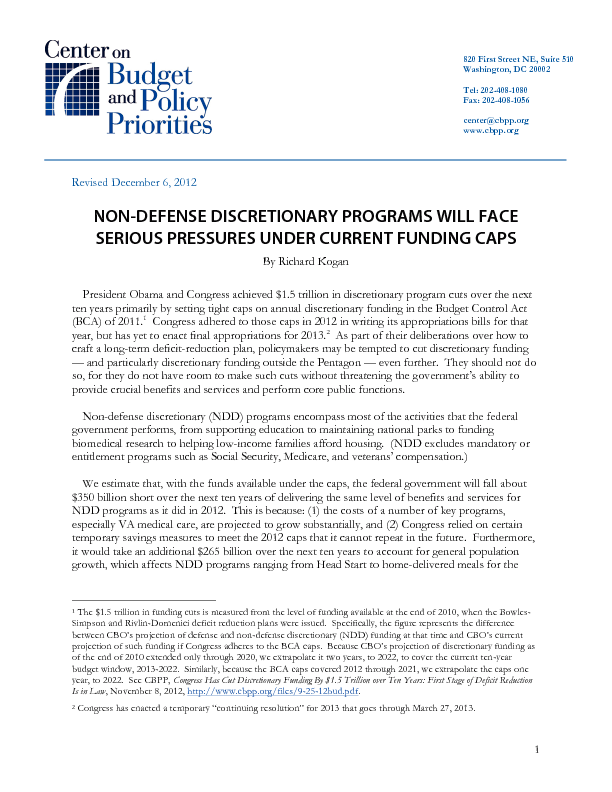