Some opponents of health reform’s Medicaid expansion have complained that it would enable many former inmates to qualify, citing an estimate that 35 percent of adults who would be newly eligible for Medicaid have been involved in the criminal justice system in the past year.[1]  Such figures, however, are highly inflated.

For one thing, only about half that amount — 17 percent — of newly eligible adults who enroll in Medicaid will have been in jail or prison.  For another, the majority of these people were not convicted of a crime but, instead, spent brief periods in local jails while awaiting trial or final action on the charges against them.[2]

More importantly, studies show that connecting low-income adults to the health care system when they leave jail or prison can help them adjust to life in the community and avoid returning to jail or prison.  Medicaid, however, does not provide health care coverage for people while they are in jail or prison.

How Many Adults Leaving Jail and Prison Would Likely Enroll in Medicaid?

The most likely source of the 35 percent estimate, which was also cited in March in a New York Times article,[3] is a 2011 Department of Justice (DOJ) announcement of funding for a research project on whether connecting released inmates to Medicaid can help them obtain health care and jobs and avoid returning to prison or jail.[4]  The DOJ announcement used the 35 percent figure, which the announcement said was based on the “estimated size of the newly [Medicaid] eligible population, the size of the justice involved population and the share of that population without insurance.”

The DOJ announcement stated that the newly eligible population will include “many of the 9 million individuals who cycle through American jails and the over 725,000 individuals who are released from prison every year.”  It isn’t clear whether the DOJ, in estimating how many ex-inmates would become eligible for Medicaid, accounted for their income levels and other characteristics, or just for their insurance status.  But even if it did take these characteristics into account, the resulting 35 percent estimate is inaccurate; it fails to take into account that not all people eligible for Medicaid (or other means-tested programs) actually enroll.

No means-tested program has 100 percent participation or close to it.  For that reason, estimates of the impact of the Medicaid expansion, such as the Congressional Budget Office (CBO) estimates that DOJ used as its estimate of the newly eligible population, routinely apply a participation rate to calculate the number of potentially eligible people who will actually enroll in coverage.  CBO didn’t specify the participation rate it assumed in its analysis of the Medicaid expansion, but the Urban Institute matched CBO’s estimate of the number of people who would newly enroll in Medicaid under the expansion by assuming a 57 percent participation rate.[5]

To estimate the share of people enrolling in Medicaid as a result of the Medicaid expansion who had a previous involvement with the criminal justice system, one must compare the number of ex-inmates expectedto actually enroll with the total number of people expected to enroll.  To instead compare the number of ex-inmates who will be eligible to enroll with the CBO estimate of the number of actual enrollees — as the 35 percent figure apparently does — is to compare apples to oranges.  It represents a statistically invalid comparison.

The percentage of new Medicaid enrollees (as distinguished from people newly eligible for Medicaid) who have been involved with the criminal justice system thus will be well below 35 percent.  George Washington University researchers project that one-sixth (about 16 percent) of newly eligible Medicaid enrollees and one-tenth of enrollees in marketplace coverage will have had a jail stay over the past year.[6]  Including people who have been in prison increases the 16 percent Medicaid estimate to about 17 percent.[7]

Even though ex-inmates will make up about one-sixth rather than one-third of new Medicaid enrollees, their number is nonetheless significant.  Connecting these individuals to health coverage can enable more of them to avoid returning to jail or prison by connecting them to needed mental health, substance abuse, or other treatment.  This is why many state corrections agencies and county governments are collaborating with state Medicaid agencies on projects designed to enroll low-income people being released from jails or prisons.

Jails admitted more than 11.6 million people in 2012, but because of high turnover, there are about 750,000 people in jail on any given day, about 75 percent of whom are there for nonviolent offenses.  Most of these are people who haven’t been convicted; in 2012, about six in ten inmates in jail on a given day were being held awaiting court action, and 60 percent of the population of jails turned over each week.[8]  As many as 90 percent of people spending time in jail are uninsured.[9]

The lack of health coverage can have particularly serious consequences for people in jail because they have disproportionately high rates of both physical and behavioral health problems.  Alcohol plays a role in over half of all incarcerations, and illicit drugs are involved in over 75 percent of jail stays.  Yet only 11 percent of jail inmates with substance abuse disorders receive treatment during their stays in jail.[10]  People in jail also have higher rates of a number of chronic diseases such as HIV/AIDS, hepatitis B and C, diabetes, and arthritis, and they are diagnosed with these diseases at more advanced stages than people not involved with the criminal justice system.[11]  The picture is similar for people in prison.[12]

It’s not surprising that most people with jail and prison stays are uninsured; until health reform’s coverage expansions took effect in 2014, there was no pathway to health coverage for poor and low-income adults who weren’t parents living with their minor children, pregnant women, seniors, or people with disabilities.  Not many people with prison or jail stays fall into these categories.  About 88 percent of people with jail stays are male, and about 44 percent are under age 25.[13]

Health reform opened up Medicaid eligibility for all adults with incomes below 138 percent of the poverty line, although the Supreme Court in 2012 made the expansion optional for states.  So far, 26 states and the District of Columbia have decided to expand coverage.[14]  In addition, adults who aren’t eligible for Medicaid or employer coverage and have incomes between 100 and 400 percent of the poverty line can qualify for premium tax credits to help them afford private coverage through the new health insurance marketplaces.  Roughly half of people leaving jail can qualify for coverage through Medicaid or the marketplaces.  (This figure takes into account that about half of the states have adopted the Medicaid expansion and half have not.)[15]

While health reform’s coverage expansion holds substantial promise, there are major challenges in actually getting (and keeping) people who have been involved in the criminal justice system enrolled in health coverage.  Medicaid doesn’t cover health care services for people who are “inmates of public institutions,” including prisons and jails.[16]  Many states terminate Medicaid coverage when someone enters jail, even before a length of stay is determined, so some Medicaid enrollees may lose coverage even if they are only very briefly incarcerated.  (The better practice for states is to suspend eligibility when someone is incarcerated and then reactivate it upon release, with no need for reapplication.)[17]

A number of states and counties are working to connect people released from jail to health coverage for the first time, with a particular focus on people with mental illness and substance-use disorders, given the prevalence of these conditions in this population and the role of those conditions in increasing criminal activity.  These efforts require collaboration among multiple state agencies (including corrections, mental health and addiction, and Medicaid) and, in most states, the involvement of counties and localities that operate jails.  But they hold potential for reducing the number of inmates who return to jail, thereby eventually reducing state costs.  For example, the Ohio state Medicaid director recently noted that enrolling such individuals “will allow for [ex-inmates] to have immediate access to much-needed mental-health and substance-abuse treatment services upon release. . . .  We hope that this approach will help to reduce the recidivism in our state and get these individuals back into the workforce.”[18]

States considering whether to expand Medicaid should consider the growing evidence that connecting the jail-involved population to treatment for mental illness and substance abuse can lower recidivism.  A recent review of several projects that have linked people leaving jail to care in the community finds such projects show that increased access to substance abuse treatment can be cost-effective and result in medical cost savings, and may play a role in reducing recidivism, particularly for people with mental illness and substance-use disorders.[19]

As one example, a study of a Michigan program to help recently released prisoners obtain community-based health care and social services found that it cut the recidivism rate by more than half, from 46 percent to 21.8 percent.  Similarly, a study that the Department of Justice funded in Florida and Washington found that “in both states, 16 percent fewer jail detainees with serious mental illnesses who had Medicaid benefits at the time of their release returned to jail the following year, compared to similar detainees who did not have Medicaid.”[20]

[2] Usually run by local governments, jails house people awaiting trial and people convicted of lesser offenses.  The number of people released from jail each year far exceeds the number released from prisons, which are run by the federal or state governments and house people convicted of crimes. Only about 4 percent of people admitted to jail end up in prison.  Bonita M. Veysey, “The Intersection of Public Health and Public Safety in U.S. Jails:  Implications and Opportunities of Federal Health Care Reform,” Rutgers School of Criminal Justice, January 2011, http://www.cochs.org/files/Rutgers%20Final.pdf.

[4] Department of Justice Solicitation for a Cooperative Agreement — Evaluating Early Access to Medicaid as a Reentry Strategy, 76 Fed. Reg.39440 (July 6, 2011).  This is the source of the estimate cited by Avik Roy.

[5] John Holahan and Irene Headen, “Medicaid Coverage and Spending in Health Reform: National and State-by-State Results for Adults at or Below 133% FPL,” Urban Institute, May 2010, http://kaiserfamilyfoundation.files.wordpress.com/2013/01/medicaid-coverage-and-spending-in-health-reform-national-and-state-by-state-results-for-adults-at-or-below-133-fpl.pdf.

[6] Marsha Regenstein and Sara Rosenbaum, “What the Affordable Care Act Means for People with Jail Stays,” Health Affairs, March 2014. Regenstein and Rosenbaum find that about 25 to 30 percent of people released from jail over the course of a year will enroll in Medicaid in states taking the Medicaid expansion, and about 20 percent will enroll in marketplace coverage.

[7] Allison Evans Cuellar and Jehanzeb Cheema, “As Roughly 700,000 Prisoners are Released Annually, About Half Will Gain Health Coverage and Care under Federal Laws,” Health Affairs, May 2012.  This study was completed prior to the Supreme Court’s decision and therefore assumed nationwide Medicaid expansion.  It assumed that between 150,000 and 230,000 people released from prison annually would enroll in Medicaid. The George Washington study adopted this study’s methodology but took into account the states that have actually expanded Medicaid.  If we assume that the Supreme Court decision cut the number of ex-prisoners enrolling in Medicaid in half, about 17 percent of the people enrolling in Medicaid in 2014 would have had a prison or jail stay.

[16] Section 1905(a) of the Social Security Act; 42 CFR §435.1009.  Medicaid coverage is available when an inmate leaves the institution and receives care in a hospital or other health care facility for more than 24 hours.

[17] Federal law does not require states to terminate people from Medicaid when they enter jail or prison.  It does, however, prohibit the use of federal Medicaid funds to pay for services received when someone is in a public institution. 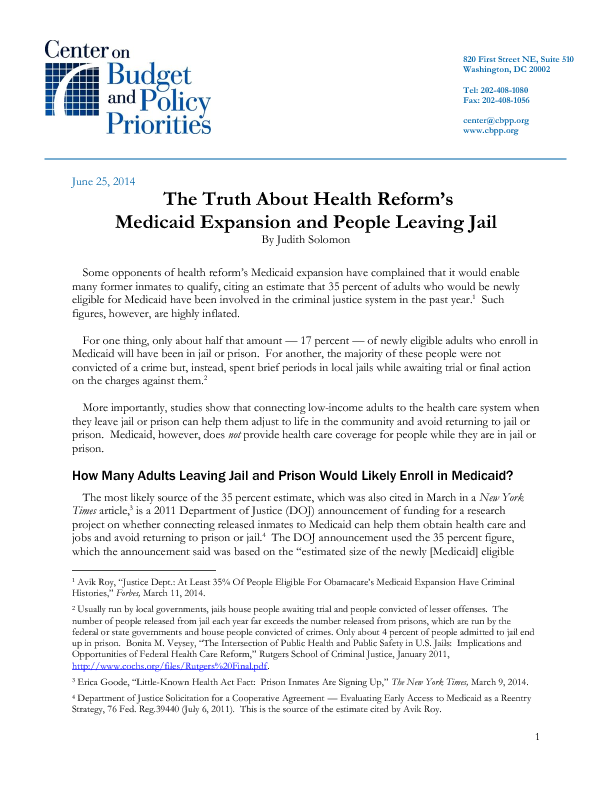