The House Has Complied This Year With Its New “Pay-As-You-Go” Rule: But Greater Challenges Lie Ahead

In early January, the House of Representatives established a Pay-As-You-Go rule.  The rule prohibits the House from considering any tax or entitlement legislation that would increase projected deficits over the coming ten-year period.  Proposed entitlement increases must be fully offset, or “paid for,” by reductions in existing entitlements or increases in revenues.  Likewise, proposed tax cuts must be fully offset by increases in other taxes or reductions in entitlements.[2]  We have examined the actions of the current House and the prior three Congresses with regard to the financing of entitlement and tax legislation and present our findings below.  We then discuss the importance of continued adherence to the PAYGO rule as well as some reasons that adherence could collapse.

In this analysis we did not examine bills passed by the Senate.  Because the Senate allows even non-germane amendments to be added to bills during floor consideration, cost estimates by the Congressional Budget Office (CBO) are less likely to be available for Senate-passed bills than for House-passed bills.  In addition, the Senate traditionally overlooks, rather than explicitly waives, minor budget violations so we cannot be sure what the non-existence of Senate PAYGO waivers means.  For these two reasons, it is easier to be sure the House has complied with PAYGO than the Senate except in the all-important case of legislation that has been sent to the President; this year, such legislation has complied with PAYGO in every case.

Our examination of CBO cost estimates leads to four conclusions. 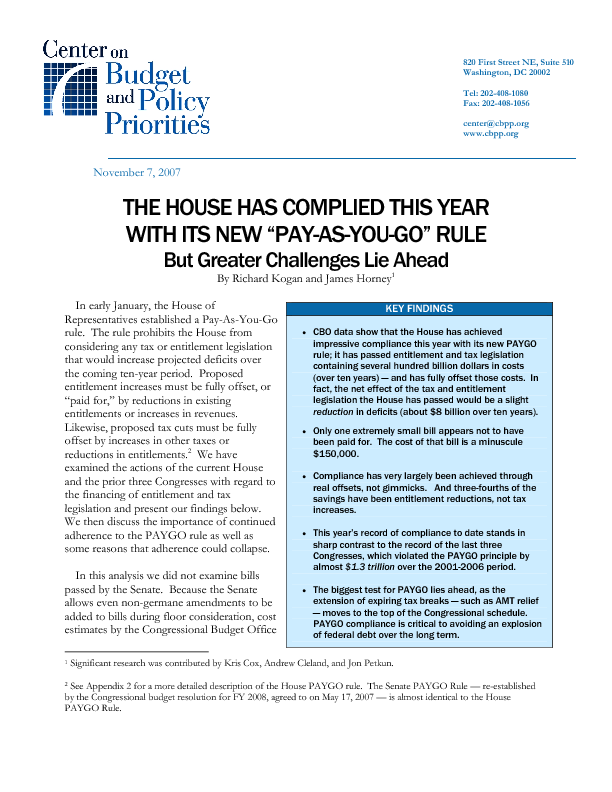 Click here to read the full-text PDF of this report  (18pp.)

[2] See Appendix 2 for a more detailed description of the House PAYGO rule.  The Senate PAYGO Rule — re-established by the Congressional budget resolution for FY 2008, agreed to on May 17, 2007 — is almost identical to the House PAYGO Rule.