The Fight Over Appropriations: Myths and Reality

Most of the Growth Would Go for Military and Homeland Security; Increases Planned for Domestic Appropriations Are Small

The Administration’s sharp criticisms have been echoed by a number of Republican congressional leaders, such as Rep. Jerry Lewis (R-CA), the ranking minority member of the House Appropriations Committee, who accused the Democratic majority of “spending lust.”  Some 147 House Republican members — more than one-third of the House membership — have pledged to sustain the anticipated vetoes.

The strong criticism of the funding levels set for the appropriations bills is receiving wide coverage.  Yet comparing these levels with the current year’s appropriations and the President’s own budget request for 2008 reveals a picture sharply at odds with the attacks. 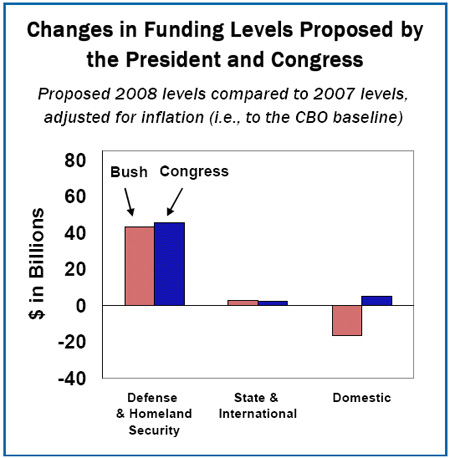 In other words, the bulk of the allegedly irresponsible increase in funding for appropriated programs reflects the President’s own request for additional military and security funding.  The increase that congressional leaders plan for domestic discretionary programs is quite small.

The notion that this modest domestic increase of $5 billion, which follows several years of cuts in these programs, could have a noticeable effect on the $14 trillion U.S. economy is not credible.  Nor is the claim that funding for domestic discretionary programs would put significant pressure on the deficit and force a tax increase, since these programs would grow less rapidly than either the economy or tax revenues.

The President has requested substantial increases for military, homeland security, and international programs.  Congress essentially intends to go along with the President’s request, rearranging the funding increases only modestly.

As noted, the President has called for cuts in domestic discretionary programs, which Congress intends to reject.  The appropriations committees have set the funding levels for the eight domestic appropriations bills some $5 billion (1.4 percent) above the 2007 level, adjusted for inflation.

The vast bulk of the increase in overall appropriations under the congressional plan reflects Congress’s decision essentially to go along with the President’s request for sizeable increases in military funding.

For domestic programs, in contrast, the Administration is insisting on cuts and is threatening to veto appropriations bills unless those cuts are made.  Claims that Congress’s rejection of those cuts represents “spending lust” are unfounded.  The question is not whether there should be large increases in domestic appropriations — since large increases are not on the table — but whether domestic programs should be cut (as the President demands) or increased modestly (as the Congressional majority favors).

Appendix A: The Data Used in This Analysis

In this analysis, dollar amounts are for non-entitlement or “discretionary” funding — the annual appropriations provided by the appropriations committees.  These amounts represent about one-third of the total federal budget.  Domestic discretionary programs (as that phrase is used in this analysis) represent about one-seventh of the total federal budget.

We also increase the total amount of discretionary funding under the congressional plan from $953 billion to $956 billion for the purposes of this analysis, for two reasons.

Our funding figures for the President’s budget are as CBO reestimated them in March.  Our figures for “2007 funding adjusted for inflation” are the CBO baseline for 2008, issued in March; CBO uses a baseline projection methodology that assumes existing 2007 funding will grow with inflation in subsequent years.  (Under the CBO baseline rules, personnel costs grow with the employment cost index, while non-personnel costs grow with the GDP price index, so the exact amount of the inflation adjustment in any budget account depends on the mix of personnel and non-personnel costs in that account.)

All amounts of discretionary funding exclude costs that have been designated as “emergency.”  This means that the costs of the Iraq and Afghanistan wars are not included in either the 2007 or 2008 figures.  It also means that the large defense increase requested by the President is for underlying activities of the Defense Department, not for the “surge” or any other aspect of the Iraq war.

[1] As required by the Congressional Budget Act, the funding targets for the bills comply with the overall ceiling on appropriations set by the congressional budget resolution adopted in May.