The Piketty-Saez data has been updated. An analysis of the new data as of March 7, 2012 can be found here: http://www.cbpp.org/cms/index.cfm?fa=view&id=3697.

An analysis of recently released IRS data on pre-tax income by economists Thomas Piketty and Emmanuel Saez [1] shows that:

Piketty and Saez’s unique data series on income inequality, based on IRS files, is particularly valuable because it provides detailed information on income gains at the top of the income scale and extends back to 1913.[2] These data show that in the past decade, income concentration has reached levels last seen over 80 years ago (see Figure 2).

The gains for the top one one-hundredth of 1 percent (0.01 percent) of U.S. households were even more dramatic. The average annual income of that small group rose by 123 percent — or $20 million per household — from 2002 to 2007 (see Table 1). Even after incurring large losses in 2008, the wealthiest 0.01 percent of households held 5 percent of total income — about the level reached at the peak of the last expansion in 2000, and higher than the prior peak in 1928.

Such disproportionate growth helps explain why after the first year of the worst recession since the 1930s, households at the top of the income distribution still had incomes higher than in 2002, while households in the bottom 90 percent of the distribution lost all gains from the recent expansion and had the lowest incomes they have seen in over a decade.

With the latest IRS data, we now have both a complete picture of income concentration during the recent economic expansion, which ended in December 2007, and a glimpse of the recession’s effects on income concentration. Based on national income and product account data and other indicators, Saez predicts that next year's analysis will show that top incomes fell modestly in 2009.[5]

It remains to be seen whether the highest-income households will again capture a highly disproportionate share of income gains as the economy begins to recover, as they did after the dot.com collapse and subsequent 2001 recession (see Figure 3). Saez notes, however, that historically income concentration tends to bounce back after economic downturns unless major policy changes — such as those enacted during the New Deal — occur. So it would not be surprising, in the absence of significant policy or behavioral changes, for income concentration to return to recent levels and continue rising after the current recession ends. 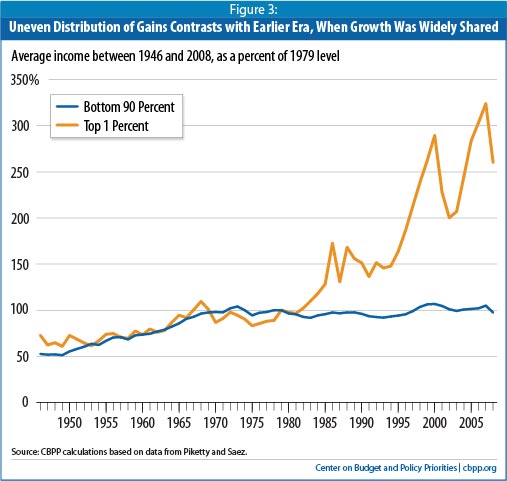 [1] Piketty and Saez rely on detailed Internal Revenue Service micro-files for available years, extending the full series to 1913 using aggregate data and statistical techniques. Their July 2010 revision incorporates the detailed micro-files for 2008 that have recently become available. For details on their methods, see Thomas Piketty and Emmanuel Saez, “Income Inequality in the United States: 1913-1998,” Quarterly Journal of Economics, February 2003, or, for a less technical summary, see http://elsa.berkeley.edu/~saez/saez-UStopincomes-2007.pdf. Their most recent estimates are available at http://elsa.berkeley.edu/~saez/TabFig2008.xls.

[2] The IRS data used by Piketty and Saez have some limitations, one of the most important of which is that they do not include people who do not file income tax returns. These people are included in the data used by the Census Bureau in its annual calculation of median household income, but the Census data have incomplete information about income at the very top of the distribution. Also, neither Piketty-Saez nor Census adjusts incomes for family size, which can distort trends when average family size is changing over time. The Congressional Budget Office publishes an analysis combining the data used by Piketty-Saez and Census to estimate average federal tax rates paid by households in various income categories, as well as before- and after-tax household income adjusted for family size. CBO thus provides the most comprehensive analysis of income distribution, but is not as timely as the Piketty-Saez analysis. The most recent CBO report uses 2007 data and provides historical data only back to 1979. (See http://www.cbo.gov/publications/collections/collections.cfm?collect=13.)

[4] As discussed earlier, the Piketty-Saez data are particularly useful for analyzing long-term trends at the very top of the income distribution. They have some limitations for the bottom 90 percent, however, an important one of which is that they do not include households that do not file income tax returns. Other data sources show modestly larger or smaller gains for the bottom 90 percent, but all show a sharp discrepancy in income growth between the top 1 percent of households and everyone else.

[5] Emmanuel Saez, “Striking It Richer: The Evolution of Top Incomes in the United States,” Pathways Magazine, Stanford Center for the Study of Poverty and Inequality, Winter 2008 (updated July 17, 2010), http://elsa.berkeley.edu/~saez/saez-UStopincomes-2008.pdf.