"State revenues are declining precipitously and costs are rising sharply, with many businesses closed and tens of millions of people newly unemployed."

COVID-19 has triggered a severe state budget crisis. While the full magnitude of this crisis continues to unfold, state revenues are declining precipitously and costs are rising sharply, with many businesses closed or operating at reduced hours and millions of people recently unemployed. Due to the economy’s rapid decline and uncertainty about its future path as well as possible federal aid, official state revenue projections likely do not yet fully reflect the unprecedented fiscal impact of the coronavirus pandemic. Executive and legislative fiscal offices in many states are analyzing new economic projections and producing initial estimates of the damage before state legislatures meet in regular or special sessions to address shortfalls. Most states have released estimates but they may change before state legislatures meet again later this year or in January. (See Table 1.)

States’ initial revenue projections give a first look at some of the damage the pandemic-induced downturn is causing to state budgets, though they do not show states’ increased costs from fighting the virus and from rising demand for state services. The wide range of projected revenue impacts reflects the uncertainty that states face, and the variety of methods states are using to begin to assess the damage. (In some cases, states are still relying on data available before the crisis.)

Most states have begun the fiscal year that will extend through June 2021. State revenue estimators are likely proceeding cautiously with these initial estimates because of the consequences the revenue declines will have as states work to balance their budgets. Policymakers will want to be more certain about the scale of expected revenue drops before making large and harmful budget cuts. There is considerable uncertainty about the course of the economy over the next year. For example, if the federal government fails to provide additional fiscal stimulus, the chance that the economy could turn down again rises and a resurgence of the virus would dampen growth. In addition, gas taxes, vehicle registration fees, and other revenues that are deposited into separate funds (like transportation funds) are also declining.

States faced an immediate crisis in fiscal year 2020 as the pandemic took a toll on revenues. State tax collections for March through July 2020 were 7.5 percent less than in the same months of 2019. In normal times, tax collections would have grown from 2 to 3 percent. To balance their budgets — as required — states made cuts, tapped reserves, or found enough revenue to close these shortfalls in just three months, an extremely short period to find such large amounts of revenue. The federal fiscal aid provided so far and the fact that high-wage earners were more likely to keep their jobs than low-wage workers, combined with the stock market remaining at high levels, has meant that revenues did not fall quite as much as anticipated in some states. But states still face large budget shortfalls and uncertainty as COVID-19 cases continue to climb and much federal assistance to workers and businesses has ended and may not be extended.

State estimates show that revenues for the current fiscal year, which began on July 1 for most states, could fall as much as or more than they did in the worst year of the Great Recession and remain depressed in following years. New York and Colorado, for example, project revenue drops of 17 percent or more if the recession is deep.

Another group of states face a double threat. States with a high concentration of oil-related industries are seeing a decline in economic activity and tax collections due to plunging oil prices on top of COVID-19-related effects and the recession. For example, Alaska is projecting an $882 million decline in revenues in the current fiscal year, and New Mexico could see a $2 billion drop.

States are drawing on their rainy day funds and other budget reserves to address these shortfalls but, as in the last recession, those reserves will be far from adequate. And states will worsen the recession if they respond to this fiscal crisis by laying off employees, scaling back government contracts for businesses, and cutting public services and other forms of spending.

Damaging cuts have already begun. In Georgia, policymakers approved a 10 percent cut for 2021, including a nearly $1 billion cut for K-12 public schools and cuts to programs for children and adults with developmental disabilities, among others. Maryland enacted $413 million in emergency spending cuts including large cuts to colleges and universities. Florida’s governor vetoed $1 billion in spending that lawmakers approved before the crisis and ordered agencies to look for 8.5 percent more in possible cuts for fiscal year 2021. The state also cut money for community colleges and services related to behavioral health, including opioid and other substance use treatment services, crisis intervention services, and services for people experiencing homelessness.

Given the economy’s rapid decline and the extraordinary damage being done to state, Tribal, and local budgets, federal policymakers will need to provide more help to states and families affected by the crisis.

We’ve collected the preliminary estimated revenue declines we’re aware of in the table below. We’ll update this list as states continue to revise their revenue estimates for the upcoming fiscal year. In all cases these are preliminary estimates that will be updated as more is known about the impact of the COVID-19 pandemic on the economy and tax collections. 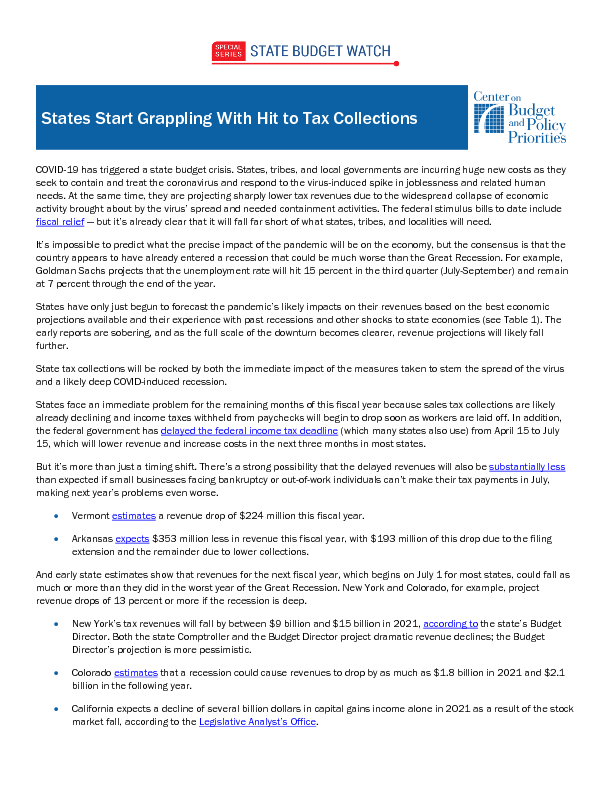