Fact Sheet: Debunking the Myth that Raising Taxes on the Rich Will Harm a State’s Economy

Opponents of raising taxes on a state’s wealthiest residents in order to strengthen education and other public assets often claim that doing so actually weakens the state economy by causing many residents to flee to lower-tax states. That claim doesn’t hold water.

1. No state has ever lost money by raising income or estate taxes for rich people.

Every state that has raised income tax rates or estate taxes for wealthy people has gained revenue that it could invest in good schools, transportation networks, and other services that attract people and businesses. State after state has found that any revenue lost if some rich people move out is negligible compared with the revenue generated by the tax increase for schools and other services.

2. People’s main reasons for interstate moves have nothing to do with taxes.

Thorough studies overwhelmingly conclude that differences in state taxes have no significant impact on interstate moves. Instead, people move mainly for:

Jobs and family
The most common reason people cite for an interstate move is a new job or job transfer. Family reasons are the second most common.

Less expensive housing
Housing costs vary much more across the country than state and local taxes.

Warmer climate
Though neither has an income tax, such northern states as South Dakota and Alaska saw more people move out than move in from other states from 1993 to 2011.

3. Many real-world examples contradict the claims of tax-increase opponents.

A highly rigorous study of New Jersey’s “millionaires’ tax” found that “Even among the top 0.1 percent of income earners, the new tax did not appreciably increase out-migration.”

After California raised income taxes for millionaires in 2005, the rate at which millionaires moved away actually fell.

Florida, which has no income tax, lost households overall to 11 income tax-levying states from 1993-2011, the period for which complete data are available. 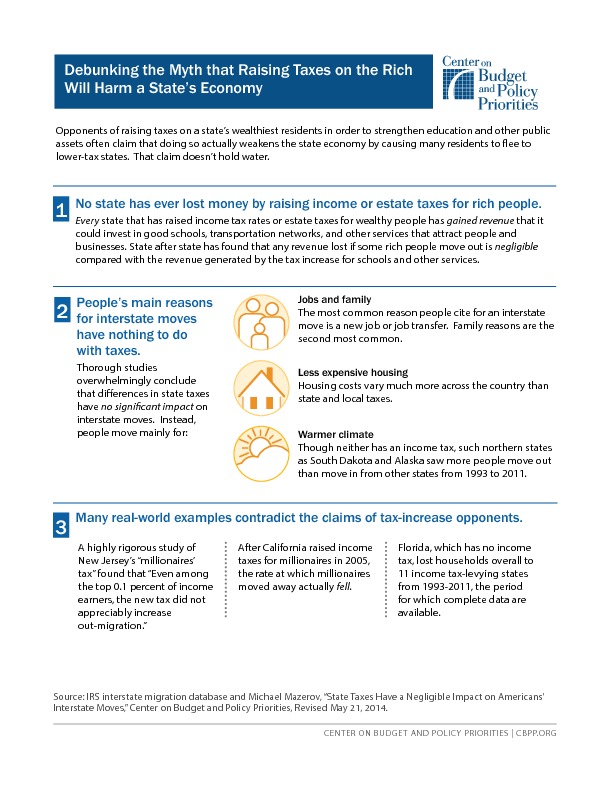 Fact Sheet: Debunking the Myth that Raising Taxes on the Rich Will Harm a State’s Economy (PDF) (1 pp.)