The Ryan budget understates defense spending by $100 billion over the next ten years.  It claims $100 billion in defense savings that, in reality, would not materialize because they are flatly inconsistent with Congressional Budget Office (CBO) estimates of the amount of defense spending that would result from the amount of defense funding the budget contains.  This is politically significant:  without these phantom savings, the Ryan budget does not achieve balance in any of the next ten years.

To be sure, we do not consider a zero deficit to be a meaningful target.  Instead, policymakers’ goals should be:  for the short term, to assist the recovery by not imposing too much austerity too soon, a test that the Ryan budget fails to meet;[1] over the mid-term, to stabilize the debt as a percent of gross domestic product; and ultimately, to reduce the debt ratio.  But Chairman Ryan obviously considers a zero deficit by the tenth year to be significant.

To understand how $100 billion in defense spending has gone missing from the Ryan budget, we need to start with the budget data that CBO provides.  In its annual report, CBO projects both funding levels (i.e., appropriations levels, also called budget authority) and the spending (or outlays) that will result from those funding levels.[2]   CBO also provides a database that lets analysts chop the data on funding in different program areas more finely, including in defense.

In addition, CBO’s report provides budget data on alternatives to its official baseline projections: one alternative eliminates the “sequestration” budget cuts scheduled for 2013 and future years, while another removes CBO’s projected continuation in future years of emergency funding for Hurricane Sandy, a tiny portion of which is going to the Pentagon.  CBO’s database allows analysts to make these two adjustments.

The Ryan budget does just that:  it reverses defense sequestration in 2014 and subsequent years and does not extend the Pentagon’s Sandy funding.  The funding levels for the National Defense function that Chairman Ryan circulated with his budget plan match to the penny the CBO numbers, with these two adjustments, in every year from 2014 through 2023.  So, when Chairman Ryan says that his budget would completely reverse the defense sequestration, his funding levels fully corroborate that statement.

Roughly $25 billion of this difference in outlays could be explained if the Ryan budget leaves in place the 2013 sequestration for defense.  But even in that case, his budget contains about $75 billion in spending reductions that do not come from funding reductions — which means they will not happen and are phantom savings.

As a result, the Ryan budget understates the costs of its defense proposals.

It is a long-established practice that the House and Senate Budget Committees use CBO’s estimates of the level of spending that results from given levels of funding.  To depart from that standard opens the door to gaming the budget numbers in order to produce politically desired results.

While serious, the missing defense spending is just one of the items in the Ryan budget that weaken the credibility of its claim to achieve balance by 2023.  For instance, Tax Policy Center analysis[3] shows that Chairman Ryan’s specified tax cuts would cost nearly $6 trillion over the next ten years.  The Ryan budget relies on a “magic asterisk” to pay for these tax cuts:  Chairman Ryan has said he would offset their cost by cutting tax expenditures, but he has not provided a single example of a tax break to close to pay for the $4.7 trillion cost of reducing the top individual and corporate rates to 25 percent, the $700 billion cost of terminating all of the revenue-raising provisions in health reform, and the nearly $300 billion cost of repealing the Alternative Minimum Tax.[4]

In addition, the Ryan budget calls for nearly $700 billion of unspecified cuts in non-defense discretionary programs; these cuts appear in the “allowances” category of his budget, rather than being allocated to particular programmatic areas.  The Ryan budget also includes roughly $800 billion in unspecified cuts in mandatory programs outside of Social Security, health, veterans, farm, civil service, and SNAP; a significant share of these unspecified cuts would likely come from programs that assist people with low or moderate incomes.[5]

The budget’s heavy reliance on massive, unspecified savings, along with its understatement of defense spending, suggest that it wouldn’t work as advertised in achieving major deficit reduction, let alone in reaching budget balance.

[1] Chad Stone, “Yes, the Ryan Budget Is Contractionary,” Off the Charts Blog, Center on Budget and Policy Priorities, March 14, 2013, http://www.offthechartsblog.org/yes-the-ryan-budget-is-contractionary/.

[5] Richard Kogan and Kelsey Merrick, “Chairman Ryan Gets 66 Percent of His Budget Cuts from Programs for People With Low or Moderate Incomes,” Center on Budget and Policy Priorities, March 15, 2013, http://www.cbpp.org/cms/index.cfm?fa=view&id=3925. 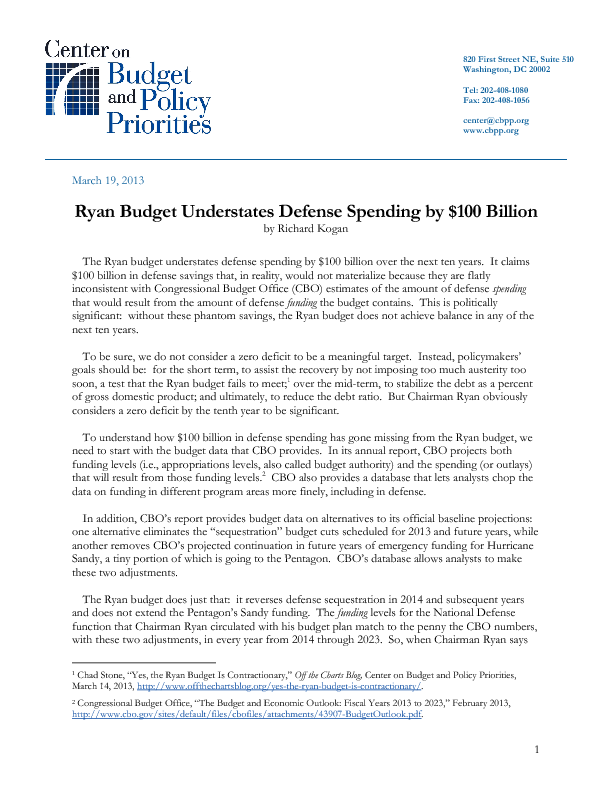