Even some critics of House Budget Committee Chairman Paul Ryan’s budget plan have praised his “courage” and his willingness to make “hard choices” to address looming deficits. But, upon closer inspection, Chairman Ryan’s widely reported claim that his plan produces $1.6 trillion in deficit reduction proves illusory. In fact, the numbers in his plan show that his budget produces just $155 billion in real deficit reduction over ten years (see graph).

That means that, despite proposing $4.3 trillion in what would be the most severe and wrenching budget cuts in U.S. history — two-thirds of which would come from programs for people of low or moderate incomes — the plan barely reduces deficits at all over the next decade. That’s because his budget cuts are offset by $4.2 trillion in tax cuts that would go disproportionately to those at the top. In essence, at least for the next decade, this plan is far less a blueprint for addressing deficits and far more a proposal to redistribute large amounts of resources from those at the bottom to those at the top.

What’s the difference between what Chairman Ryan claims and what his plan really does? The chairman claims that his plan generates $5.8 trillion in spending cuts over ten years, relative to the Congressional Budget Office (CBO) baseline. But that number falls by $1.5 trillion — to $4.3 trillion — once one corrects for two things:

Why Are the Spending Cuts and Deficit Reduction So Much Less Than Claimed?

The documents that Chairman Ryan released this week show the changes his plan would produce in spending, revenues, and deficits, relative to CBO’s March 2011 baseline projections. A table in the plan summary that Ryan issued shows $5.8 trillion in spending cuts, $4.2 trillion in tax cuts, and $1.6 trillion in deficit reduction.[2]

About $1.3 trillion of the claimed $5.8 trillion reduction in spending, however, comes simply from taking credit for spending less in future years for the wars in Iraq and Afghanistan, as a result of the already-planned drawdown in the number of troops fighting in those countries. While this accurately reflects the difference between spending for the wars in Ryan’s plan and spending for the wars projected in CBO’s baseline, it does not represent savings or deficit reduction resulting from any change in policy proposed by Ryan.

But for discretionary spending — that is, for spending controlled by annual appropriation acts — assuming current law does not make sense. Current law for discretionary funding for 2012 through 2021 is effectively zero since the appropriations bills for those years have not yet been enacted. It clearly would be inappropriate — and would lead to an understatement of federal spending and deficits — to project future spending and deficits based on the assumption that there will be no funding in the future for defense, the Federal Bureau of Investigation, health care for veterans, and all other federal programs and activities funded by discretionary appropriations. Accordingly, the baseline rules require CBO to assume that for each account and activity, Congress will provide the same amount of funding in each year the baseline projections cover as it provided in the most recently enacted appropriation bills (adjusted for inflation). This generally serves as an adequate proxy for the cost of continuing current policies for discretionary programs.

There is, however, one large anomaly — funding for the wars in Iraq and Afghanistan — that causes the current baseline projections to vary significantly from what it will cost to continue current policies. Following the baseline rules, CBO projects that in every year from 2012 through 2021, appropriations for the wars will remain at the current annual funding level (about $160 billion), adjusted for inflation. CBO estimates that this level of funding for the wars will result in outlays of nearly $1.6 trillion over ten years. Yet a drawdown in troops is already well underway in Iraq and is planned for Afghanistan, and the President has proposed significant reductions in funding for the wars in coming years. CBO has estimated that under the current policy, as reflected in the President’s budget, outlays for the wars total $545 billion over the next ten years — or more than $1 trillion less than CBO’s baseline projection. Chairman Ryan’s budget merely plugs in the CBO’s estimate of the war costs under the President’s proposal, without changing them.

This difference of about $1.05 trillion between the war costs in the Ryan budget and those in the CBO baseline thus does not represent new savings that result from Ryan’s budget proposals. Yet Ryan counts this $1.05 trillion, plus the $250 billion reduction in interest costs that such a $1.05 trillion spending reduction would produce, as $1.3 trillion in spending cuts and deficit reduction. [3]

Many budget watchdogs have said that policymakers should not count the savings that simply result from the fact that we won’t need to spend as much on the wars in the future because fewer troops will be deployed. As noted above, Ryan himself said in a February interview that savings in the Obama budget that come from the troop drawdown should not be considered real savings or deficit reduction. Ryan commented that the Obama budget showed savings of $1.1 trillion because the costs under the proposed withdrawal were compared to a baseline that assumed “they’re going to be in Afghanistan and Iraq at current levels for ten years,” and called these “phantom savings.”

Ryan was correct to term these “phantom savings.” And if the phantom savings are not counted as real savings, the amount of spending cuts that Ryan’s proposals produce is $1.3 trillion less than Ryan claims.

One other adjustment also needs to be made to the amount of spending cuts the Ryan plan generates. There is an error in the amount of interest savings that the Ryan documents claim his plan would produce. Using CBO’s economic and technical assumptions and CBO’s standard methodology for calculating the changes in interest payments that result from changes in tax and program policies, and giving Ryan full credit for all of the program savings he claims (including savings from reducing the number of troops in Iraq and Afghanistan), we estimate the Ryan documents overstate interest savings by $229 billion.[4] In fact, excluding the above-mentioned $250 billion in interest savings claimed in relation to war costs, we calculate that the Ryan plan actually increases interest costs by $5 billion over ten years. [5]

[1] Interview on February 14, 2011, with Melissa Block on National Public Radio’s “All Things Considered.”

[5] Although the direct effect of the Ryan policy changes is to reduce the deficit over the ten-year period, they actually increase the deficit for the first half of the decade (not counting savings from the troop withdrawal). That causes interest payments for the whole ten-year period to be slightly higher than under the baseline, although annual interest payments are below baseline levels at the end of the budget window. 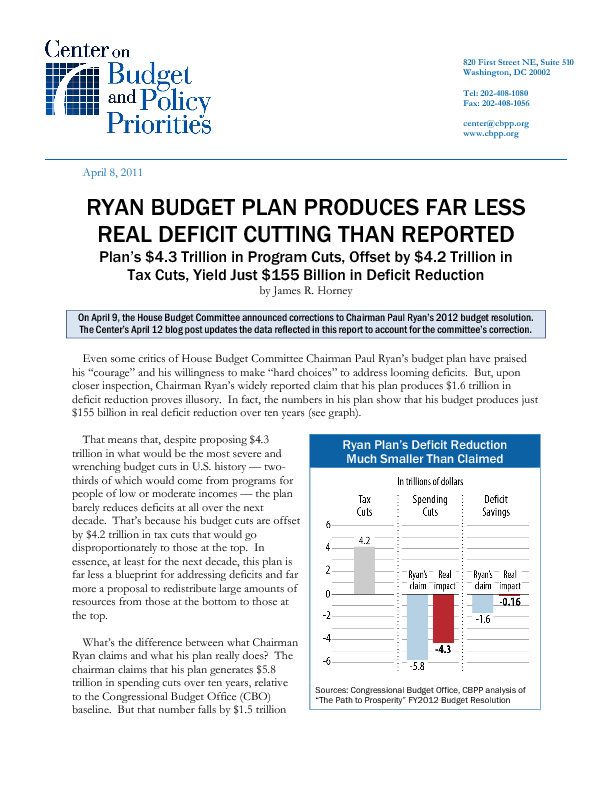