The Medicaid block grant proposal in the budget plan proposed by House Budget Committee Chairman Paul Ryan, which the House of Representatives passed on March 21, would cut federal Medicaid (and the Children’s Health Insurance Program, or CHIP) funding by 31 percent by 2023, because the funding would no longer keep pace with health care costs or with expected Medicaid enrollment growth as the population ages (see Figure 1).  These cuts would come on top of repealing the health reform law’s Medicaid expansion. 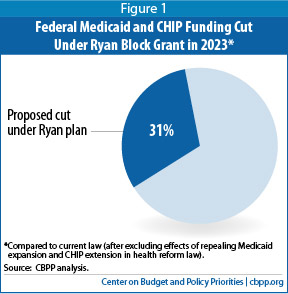 Cuts of this magnitude would substantially — and negatively — affect millions of low-income Americans’ ability to secure health coverage and access needed health-care services.  Medicaid cannot readily withstand cuts of this depth without harmful results for low-income families and individuals.  The program already costs significantly less per beneficiary than private insurance does, because it pays health providers much lower rates and has considerably lower administrative costs.  In addition, its per-beneficiary costs have been rising more slowly than private insurance premiums for the past decade, and they are expected to grow no faster than private insurance over the next ten years.

In analyzing a similar block grant from last year’s House budget plan, the Congressional Budget Office (CBO) concluded that unless states increased their own Medicaid funding very substantially to make up for the Ryan plan’s deep Medicaid funding cuts, they would have to take such steps as cutting eligibility, which would lead to more uninsured low-income people; cutting covered health services, which would lead to more underinsured low-income people; and/or cutting the already-low payment rates to health care providers, which would likely cause more doctors, hospitals, and nursing homes to withdraw from Medicaid and thereby reduce beneficiaries’ access to care.  The Urban Institute estimated that last year’s block grant proposal would lead states to drop between 14.3 million and 20.5 million people from Medicaid by 2022 (in addition to the up to 17 million people who could no longer gain coverage because of the repeal of the health reform law’s Medicaid expansion, assuming that all states take up the expansion).  This year’s proposal likely would result in cuts that would be just as draconian.

How the Block Grant Would Work

Under the Ryan budget’s proposal to replace Medicaid with a block grant, the federal government would no longer pay a fixed share of states’ Medicaid costs.[1]   States would instead receive a fixed dollar amount that would rise annually with the general inflation rate and the percentage increase in the size of the U.S. population.[2]

The 2014 Ryan plan provides even less detail about its Medicaid block grant proposal than the past two House budgets did. [3]  Starting in fiscal year 2015, states would receive a fixed dollar amount of Medicaid funding.  Federal funding that would otherwise be available to states under CHIP would be merged into the block grant as well.[4]   The combined block grant amounts for subsequent years would be based on the prior year’s amount, adjusted for inflation and U.S. population growth.

Because the block grant funding levels would not keep pace with health care costs or the expected increase in the number of Medicaid beneficiaries — especially the growth in the number of elderly beneficiaries, who cost more to serve — the block-grant funding levels would fall further behind need with each passing year.  The percentage increase in the block-grant funding level from one year to the next would average about three percentage points less per year than what CBO expects to be the Medicaid program’s average growth rate over the coming decade under current law.

According to the Ryan budget, the block grant proposal would shrink federal Medicaid and CHIP funding by $810 billion — or 21 percent — over the next ten years, relative to current law.[5]   This does not count the loss of the additional federal Medicaid funding that states would receive under the health reform law’s Medicaid expansion and the two-year extension of the CHIP program with corresponding funding increases, which the Ryan budget would both repeal.  (The reductions to CHIP funding, compared to baseline funding levels, would likely constitute only a tiny share of these cuts due to its very small size relative to the Medicaid program.)

By 2023, the federal Medicaid and CHIP funding cut would be $150 billion for that year alone, an estimated reduction of 31 percent compared to what states otherwise would receive for that year under current law (see Table 1 for the year-by-year funding reductions).[6]   This percentage would grow larger each year after that.

These funding cuts would be even larger in years when enrollment or per-beneficiary health care costs rise faster than is currently projected.  Unlike under the current Medicaid program, where federal funding rises automatically in response to a recession or unanticipated costs from epidemics or medical breakthroughs, states would have to bear all such added costs themselves.

Block Grant Would Lead to Deep Cuts to Eligibility, Benefits, and Provider Payments

Under the block grant, states would be given expansive new flexibility in their Medicaid programs in areas such as eligibility and benefits.  As CBO concluded when it analyzed the similar Medicaid block grant from last year’s House budget plan, while states may be able to use this flexibility to improve efficiency of those programs:

[T]he magnitude of the reduction in spending . . . means that states would need to increase their spending on these programs, make considerable cutbacks in them, or both.  Cutbacks might involve reduced eligibility for Medicaid and CHIP, coverage of fewer services, lower payments to providers, or increased cost-sharing by beneficiaries — all of which would reduce access to care.[7]

In other words, unless states come up with rather massive new sums to offset the very large losses in federal funding, they would be compelled to institute deep cuts.

States almost certainly would reduce eligibility, coverage, or both, for beneficiaries as well as payments to health care providers.  These reductions would be deepest in periods such as recessions when states face significant revenue declines and have the hardest time contributing any additional state funding, yet the number of people in need of Medicaid increases.  The cuts could include some or all of the following types of measures.

House Budget Chairman Paul Ryan argues that his block grant proposal would allow states to tailor their Medicaid programs to better fit their needs and to provide Medicaid beneficiaries more choices and better access to care.  Yet there can be no question that the block grant proposal would result in severe cuts in federal funding for state Medicaid programs.  To compensate for funding cuts of this magnitude, states would have little choice but to institute deep cuts to eligibility, benefit coverage, and/or provider payment rates.  The almost-inevitable result would be that millions more low-income individuals and families would end up uninsured or underinsured, with reduced access to needed medical care.

[3] While the magnitude of the federal funding reductions is similar to the block grants proposed in the previous two House budgets, the design of the block grant itself appears to differ in unspecified ways.

[4] Because the Ryan budget would also repeal the Affordable Care Act’s coverage expansions, it would eliminate the two-year extension of the CHIP program for 2014 and 2015.  The CBO baseline, however, assumes that CHIP will be reauthorized (in this case, beyond 2013) but at a reduced annual funding level of $5.7 billion, which is well below current CHIP spending levels.

[5] Under the Ryan block grant, the percentage reduction in federal Medicaid and CHIP funding over ten years would equal 33 percent (rather than 21 percent), relative to current law, if the effects of repealing the ACA’s Medicaid expansion and the two-year extension of CHIP are included.

[9] See January Angeles, “Ryan Medicaid Block Grant Would Cause Severe Reductions in Health Care and Long-Term Care for Seniors, People with Disabilities and Children,” Center on Budget and Policy Priorities, May 3, 2011,  https://www.cbpp.org/cms/index.cfm?fa=view&id=3483

Ryan Medicaid Block Grant Would Cause Severe Reductions in Health Care and Long-Term Care for Seniors, People with Disabilities, and Children