Raising Medicare's eligibility age from 65 to 67, which the new Joint Select Committee will likely consider this fall as a deficit-reduction measure, would not only fail to constrain health care costs across the economy; it would increase them.

While this proposal would save the federal government money, it would do so by shifting costs to most of the 65- and 66-year-olds who would lose Medicare coverage, to employers that provide health coverage for their retirees, to Medicare beneficiaries, to younger people who buy insurance through the new health insurance exchanges, and to states.

The principal study of the effects of raising the Medicare eligibility age, by the Kaiser Family Foundation, estimates that its increased state and private-sector costs would be twice as large as the net federal savings.  If the proposal were fully in effect in 2014, Kaiser estimates, it would generate $5.7 billion in net federal savings but $11.4 billion in higher health care costs to individuals, employers, and states.

The Kaiser report found that if policymakers raised the Medicare eligibility age to 67:

Under the health reform law (the Affordable Care Act, or ACA), seniors no longer eligible for Medicare could obtain coverage through Medicaid or the exchanges.  But raising the age of eligibility for Medicare would substantially boost out-of-pocket costs for 65- and 66-year-olds, which many of them with modest incomes could have difficulty affording, prompting some to become uninsured and others to forgo needed care.  It also would raise health care costs overall.  Policymakers could take some steps, outlined below, to limit — but not eliminate — these harmful impacts.  Moreover, if Congress repealed health reform, as the House has voted to do, large numbers of 65- and 66-year-olds who lost Medicare coverage would likely wind up uninsured.

The Congressional Budget Office (CBO) has examined an option that would raise Medicare's eligibility age by two months every year starting with people born in 1949 (who will turn 65 in 2014) until it reaches 67 for people born in 1960 (who will turn 67 in 2027), remaining at 67 thereafter. [1]  Under this option, CBO assumes that Congress would make 65- and 66-year-olds with incomes below 138 percent of the poverty level eligible for Medicaid, to match the new Medicaid income limit for other adults that the Affordable Care Act establishes starting in 2014.

CBO estimates that this option would reduce federal spending by $125 billion over the ten-year period from 2012 through 2021.  Medicare spending would drop by $162 billion, while other federal spending — primarily Medicaid and subsidies to purchase health insurance in the new health insurance exchanges — would increase by a net of $38 billion.  By 2035, according to CBO, this option would reduce projected Medicare spending by about 7 percent, from 5.9 percent to 5.5 percent of gross domestic product.  (Note:  The option that CBO examined does not include the costs of several steps that should be taken to reduce some of the proposal's adverse impacts; these steps, which are outlined below and should be regarded as essential aspects of the proposal if policymakers decide to pursue it, would reduce the federal savings.)

Raising the age of eligibility for Medicare would have ramifications far beyond the federal budget.  People who lost Medicare would have to seek health coverage from other sources.  This would affect not only their own personal budgets but also employers' costs, state budgets, and the premiums paid by Medicare beneficiaries and participants in the new health insurance exchanges. 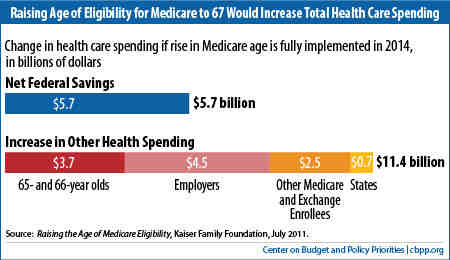 A recent Kaiser Family Foundation study analyzed the key effects of raising Medicare's eligibility age to 67. [2]  Unlike the CBO cost estimate, which assumes gradual implemen­ta­tion, the Kaiser analysis illustrates the effects of the proposal when it is completely phased in by assuming that the proposal is fully implemented in 2014.

Kaiser estimates that raising the eligibility age would save the federal government $5.7 billion in 2014.  The savings reflect $24 billion in lower Medicare spending net of beneficiaries' premiums, largely offset by $18 billion in higher spending for Medicaid and subsidies for low-income participants in the health insurance exchanges.  The estimated increase in costs to seniors, employers, states, and others, however, would total $11.4 billion — twice the net savings to the federal government.  (See figure.)

Many Who Lost Medicare Coverage Would End Up Uninsured

The Kaiser study assumes for the sake of simplicity that everyone who would lose Medicare coverage would obtain health insurance coverage elsewhere.  Under this assumption, Kaiser estimates that 42 percent of 65- and 66-year-olds would obtain coverage from employer-sponsored plans (either as retirees or active workers), 38 percent would enroll in the new health insurance exchanges, and 20 percent would become covered under Medicaid.

In reality, however, many of these 65- and 66-year-olds are likely to end up uninsured.  Some of those eligible for premium credits in the exchanges would not enroll because they would regard the required premium contribution as too high; people with incomes between 300 and 400 percent of the poverty level (about $34,500 to $46,000 for an individual in 2014) will have to pay 9.5 percent of their income — $3,300 to $4,400 — for exchange coverage.  Even some of those eligible for more generous premium credits or for Medicaid would likely fail to obtain coverage; participation in means-tested programs like Medicaid falls far short of that in social insurance programs like Medicare, in part because of the difficulties navigating the application process.

Two-thirds of 65- and 66-year-olds — 3.3 million people — would incur an average of $2,200 more in out-of-pocket health spending for premiums and cost-sharing if Medicare's eligibility age were raised, according to Kaiser.  The remaining one-third — 1.6 million people with incomes below 300 percent of the poverty level, who would be eligible for Medicaid (if everyone up to 138 percent of poverty was covered) or larger premium subsidies — would pay $2,300 less, on average.  Overall, 65- and 66-year-olds would pay an average of $700 a year more, or $3.7 billion more in total in 2014.

In some states, 65- and 66-year-olds could receive less adequate coverage in Medicaid and the exchanges than they would have from Medicare.  While Medicaid generally offers a more comprehensive benefits package than private insurance and Medicare, with only nominal cost-sharing, state Medicaid programs can limit both the number of prescriptions covered per month and the number of physician visits covered each year.

For some individuals made newly eligible for Medicaid by the health reform law — a group that would encompass many 65- and 66-year-olds under this proposal — states can opt to provide a much less generous benefit package than the regular Medicaid package, so long as they provide the "essential benefits" available through the exchanges.  The Department of Health and Human Services has yet to specify the essential benefits package; depending on the flexibility it gives states in this area, 65- and 66-year-olds may lose coverage of some benefits or have them covered to a lesser degree than they would under Medicare.  Finally, because of Medicaid's low reimbursement rates to health care providers, some Medicaid beneficiaries are likely to have more difficulty obtaining physician services, particularly from specialists, than they would have under Medicare.

Costs Would Shift to States, Employers, and People in Medicare and the Exchanges

As well as increasing out-of-pocket health costs for 65- and 66-year-olds, raising Medicare's eligibility age would shift costs to states, employers, Medicare beneficiaries, and participants in the health insurance exchanges.

According to Kaiser's estimates, the additional costs to 65- and 66-year-olds, state governments, employers, Medicare beneficiaries, and exchange participants would total $11.4 billion — twice the net savings to the federal budget.  Thus, like the House Republican budget fashioned by Rep. Paul Ryan, raising the age of eligibility for Medicare would increase — not reduce — economy-wide health care spending. [5]

Finally, by shrinking Medicare's share of the health insurance market, the proposal would reduce Medicare's market power and weaken its ability to serve as a leader in controlling health care costs.

Modifications to Proposal Could Ameliorate — But Not Solve — Its Core Problems

Most of the problems discussed above would occur under any proposal to raise Medicare's eligibility age to 67.  Total health care costs would rise, some seniors would end up uninsured, and many would face unaffordable out-of-pocket costs.  Should the Joint Committee nevertheless choose to recommend this proposal, it should include certain modifications that would limit — but not eliminate — the adverse effects on many beneficiaries and on the states:

[6] For an analysis of the problems with the blended rate proposal, see Park and Solomon,