President's Vetoes Could Cause Half a Million Low-Income Pregnant Women, Infants, and Children to be Denied Nutritional Benefits in One of Nation’s Most Effective Programs

The Special Supplemental Nutrition Program for Women, Infants, and Children (WIC) provides nutritious foods, counseling on healthy eating, and health care referrals to low-income pregnant and postpartum women, infants, and children under age five who are at nutritional risk.  Unlike other key low-income nutrition programs, such as food stamps or school meals, there is no entitlement to WIC benefits.  WIC funding is “discretionary,” which means it is provided each year through the appropriations process.  If funds are insufficient, eligible applicants are turned away or put on a waiting list for services, and some current participants may be dropped.

WIC currently serves about 8.5 million low-income mothers and young children with a budget of over $5 billion.  The program has been acclaimed for its effectiveness — as documented by an extensive body of research — in reducing the incidence of low-weight births, reducing child anemia, and improving nutrition and health outcomes.  WIC is widely regarded as one of the most effective programs at any level of government, and there has long been a bipartisan commitment — adhered to by previous congresses and by both the Clinton and Bush administrations until now — to provide sufficient funding to serve all eligible, women, infants, and children who apply.

Now, however, the Bush Administration’s insistence on limiting overall funding for domestic discretionary programs to the level proposed in the President’s budget — and the President’s vow to veto the agriculture appropriations bill because it exceeds the level his budget proposed for that bill — is raising the specter of substantial cuts in the program.  (For a discussion of the President’s veto threat, see the box on page 3.)  If funding for WIC, along with other domestic discretionary programs, is reduced to the level the President has proposed, the number of low-income women, infants, and children served by the program will have to be cut by more than 500,000 below the current level.

Funding Level Proposed by the Administration is Insufficient to Avert Cutbacks

The President proposed a fiscal year 2008 funding level for WIC of $5.387 billion, which was intended to serve an average monthly caseload of 8.28 million participants.  At the time the President’s budget was put together late last year, this amount may have seemed sufficient.  For two years in a row the per-participant cost of WIC foods had actually declined.  Since the budget was developed, however, dairy prices have soared, and they are expected to remain elevated in fiscal year 2008.  Milk and cheese account for about 40 percent of WIC food expenditures.  Prices have also risen to high levels for juice and eggs, which account for another 25 percent of WIC food costs.  As a result of higher food prices, it will cost significantly more than the Administration had anticipated to serve each WIC participant in fiscal year 2008.

Based on current food prices (and the latest estimates of food prices for the rest of fiscal year 2008), the funding level provided in the President’s budget would serve an average monthly caseload of only 7.93 million participants, significantly fewer than the Administration intended.

Moreover, participation has risen somewhat in recent months as WIC food prices have spiked, making it more difficult for low-income families to afford these foods without assistance, and as unemployment has started to climb.  The program served 8.49 million participants in the final quarter of fiscal year 2007, the most recent period for which data are available.  Thus, the number of women, infants, and children that the program serves is 560,000 above the number who could be served under the funding level in the President’s budget.

To date, the U.S. Department of Agriculture, which oversees the WIC program, has instructed the states (which actually operate the program) not to turn eligible WIC applicants away even though the funding level for fiscal year 2008 is uncertain.  This has been helpful in averting WIC cutbacks until now.  But if WIC funding ends up at the level in the President’s budget, it will mean that states will have operated for the first several months of the fiscal year at a funding level that significantly exceeds the available funding rate for the fiscal year — and states will actually need to cut WIC caseloads by more than 560,000 people in coming months to end up with an average participation decline of 560,000 for fiscal year 2008 as a whole.

What Has the President Threatened to Veto?

The President thus intends to veto the agriculture bill unless it is cut down to his levels.  Accordingly, this paper focuses on the effect of bringing the WIC funding level down to the level that the President’s budget contains.  If the WIC program were spared and funded at a higher level than the President requested, other domestic programs would need to be cut more deeply for Congress to meet the President’s demand and avert vetoes.

Moreover, reductions in the WIC caseload below the current level do not reflect the likelihood that the number of eligible families seeking WIC services will increase if adequate funding is available.  Based on WIC participation trends and the current economic outlook, the Center estimates that the average monthly WIC caseload in fiscal year 2008 would increase by 70,000 — from the current level of 8.49 million to a level of 8.56 million — if all eligible applicants were served.  Thus, an estimated 630,000 mothers and young children would likely be turned away if the program is funded at the level proposed by the President.

Neither of these amounts would be sufficient, however, to maintain the current caseload of 8.49 million women and children, although fewer eligible families would have to be turned away than under the President’s proposed funding level.  For example, the funding provided in the House bill would serve approximately 270,000 more WIC participants than the President’s proposed funding level — but would necessitate a reduction of about 290,000 participants below the current caseload level.

In addition, there is a good possibility that in the absence of the President’s veto threats, a conference report on the agriculture appropriations bill would contain a higher funding level for WIC than either the House or the Senate bills.  When the House and Senate agricultural appropriations subcommittees wrote their bills, WIC food prices were considerably lower than they are now, and estimates of how much funding WIC would need in 2008 were significantly lower as well.  Both bills include report language making a commitment to monitor WIC costs closely and “take additional action as necessary to ensure that funding provided in fiscal year 2008 is sufficient to serve all eligible applicants.”

What Would Happen If Congress "Splits the Difference"?

Press reports indicate that Congressional leaders are considering legislation that “splits the difference” between the overall level of funding provided in the appropriations bills that Congress has prepared and the overall level the President has proposed.  If this approach is adopted, Congress will have to cut the funding in these bills by close to $11 billion.

If Congress splits the overall difference with the President, it will not need to split the difference half way for every domestic program; it could provide more to some highly effective programs such as WIC.  But to do so, it would need to reduce funding closer to the President’s levels for some other programs.

How Would States be Affected?

WIC is a fully federally funded program, and state administrators need to ensure they do not exceed their annual WIC grant.  If funding is inadequate to maintain the current caseload, as it would be if WIC were funded at the President’s level, state WIC programs would have to reduce participation and establish waiting lists.  The figures in the following table show the approximate reduction in the number of women, infants, and children who could be served in each state under the President’s proposed funding level (as compared to the number who were served in the last quarter of fiscal year 2007).

These state-by-state estimates were computed in the following manner.  First, we calculated the number of participants who could receive WIC benefits nationally under the President’s proposed funding level, by dividing the funds that would be available for WIC benefits by our estimate of the average monthly cost of serving each participant (based on the latest data).  This produces the estimate that the number of women, infants, and children served nationally would have to be reduced by 562,600.  (The estimate assumes that all contingency funds would be used to provide food benefits, as explained in note 1.)

The President’s budget also includes a detrimental proposal to cut funding for WIC services (such as nutrition education, breastfeeding support, smoking cessation counseling, and health care referrals) and program administration.  If enacted, that would enable somewhat more participants to be served for a given appropriation level, but it would make the program less effective.  Congress has rejected this proposal and similar ones on a bipartisan basis each year for the past several years.  Accordingly, the estimates in this paper assume that this proposal will not be adopted.  If this proposal were adopted, the number of women, infants, and children who could be served with the President’s proposed funding level still would be about 340,000 below the number served in the last quarter of fiscal year 2007. 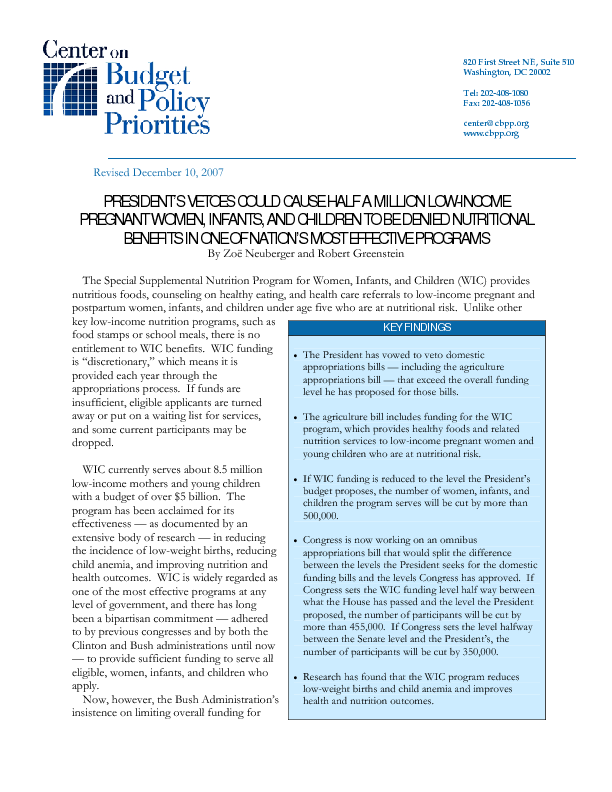