Even though its costs are expected to remain flat over the next decade,[1] the Pell Grant program, which helps students from low-income families pay for college, faces an $8 billion funding gap in fiscal year 2014 and a $58 billion shortfall through 2022 because the way Congress has funded it in recent years has made its cost appear artificially low.

The President’s budget and the House-passed budget from Budget Committee Chairman Paul Ryan provide radically different approaches to the shortfall.  The President’s budget does not cut Pell benefits or eligibility, covers Pell funding needs for fiscal year 2014, and modestly reduces the shortfall for the next decade (to $51 billion); the Ryan budget almost triples the size of the shortfall (see Figure 1) even as it significantly cuts Pell benefits and eligibility.

Thus, a recent claim by Jason Delisle of the New America Foundation that the Ryan plan represents “a feasible, gimmick-free Pell Grant proposal that makes tough choices,”  while the President’s budget “punted on a long-term plan to shore up Pell Grants,” does not withstand scrutiny.[2] 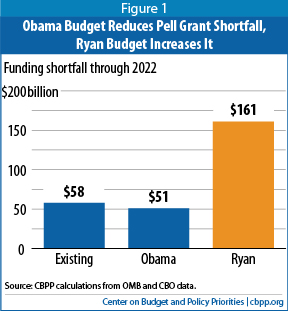 Pell Grants go to students from poor families to help pay for college.  Anyone who meets the eligibility criteria can get a grant, and the maximum grant in 2012 is $5,550 per student per year — lower if the family is not so poor or the college costs less.  Under existing law, the maximum grant will be $5,645 in 2013 and $6,030 by 2017, reflecting inflation, and then be frozen at that level.

Pell Grants are funded partly from “discretionary” money provided annually by the Appropriations Committees and partly from mandatory money — funding provided outside the annual appropriations process.  Discretionary funding supports the first $4,860 of the grant, while the remainder comes from mandatory funding.  (Mandatory funding therefore currently covers $690 of the $5,550 maximum award per student.)  Funding for this mandatory increment of the maximum award is open-ended, so there is no shortfall in this source of funding.

Discretionary appropriations for Pell were artificially low in 2009 through 2013 because Congress provided additional, large, but temporary pools of mandatory funding in those years to help cover the costs of the discretionary portion of the grant (the $4,860).  Those pools of fixed mandatory money will mostly dry up soon, however, so Pell’s discretionary funding needs will jump by $8 billion in 2014.

At the same time, the tight caps on non-defense discretionary funding (NDD) enacted as part of last year’s Budget Control Act will constrain overall NDD funding — the part of the budget that includes the discretionary portion of Pell Grants — over each of the next nine years.  There would be little or no problem meeting Pell’s funding needs within the NDD caps if the discretionary funding level for Pell grants in 2012 merely rose over the next decade at the same rate as the NDD caps (virtually the same as expected inflation) if it weren’t for the $8 billion increase needed for Pell Grants in 2014, which must then be maintained in subsequent years.  But because of that needed increase, CBO estimates indicate that Pell’s discretionary funding needs through 2022 are about $58 billion higher than the levels that would be provided if the 2012 Pell funding level simply rose modestly in tandem with the NDD caps.[3]

How do the Obama and Ryan budgets deal with this $58 billion funding shortfall?

Comparing the Obama and Ryan Approaches

The Obama budget would allow the maximum Pell award to increase as scheduled under current law and would not change eligibility or benefits.  Instead, it would provide another temporary pool of fixed mandatory funding and would offset those costs with reductions in other mandatory programs.  This new pool would cover the 2014 Pell shortfall but still leave Pell with a $51 billion shortfall through 2022.  The budget says that that the Administration will work with Congress “in 2013 or 2014 . . . [to make] the difficult choices needed to ensure the long term stability of this vital program.”

The Ryan budget also fails to fully address the long-term problem.  But unlike the Obama budget, it actually exacerbates the shortfall.

In other words, the Ryan budget would increase the $58 billion Pell shortfall by $101 billion (by repealing all mandatory funding), while reducing Pell funding needs by approximately $50 billion (by cutting eligibility and benefits).  That leaves a shortfall of $109 billion, all else being equal.

All else is not equal, however.  The Ryan budget would cut overall NDD funding below the current caps by the stunning amount of almost $1.2 trillion over ten years.  This represents an 8 percent cut in 2013 below the already tight NDD caps and a 22 percent cut in each subsequent year.

The Ryan budget does not explain which general areas (much less which programs) would absorb what share of these deep additional cuts, so we can’t know exactly how much of these cuts would come from Pell Grants.  But it is extremely unlikely that Pell Grants would not be cut significantly, along with other major NDD programs, given the magnitude of the $1.2 trillion funding reduction.

We can roughly estimate the effect on Pell Grants using the same method that we used to calculate the existing $58 billion Pell shortfall — that is, by comparing the percentage increase or reduction in the NDD caps each year, if they are set at the levels the Ryan budget calls for, with CBO’s estimate of the growth in Pell Grant funding needed under current law.  We find that the Ryan plan’s reductions in the NDD caps would expand the Pell shortfall by an additional $52 billion — leaving the Ryan budget with a total Pell shortfall of $161 billion.

Some believe that Congress could devote the Ryan plan’s $101 billion in savings from repealing mandatory Pell funding to funding the discretionary portion of the Pell Grant program, but this is not possible under the Ryan budget resolution.

If the committees with authorizing jurisdiction over the Pell programs repealed mandatory Pell funds and directly appropriated the savings to the discretionary portion of the Pell programs, the two actions would cancel each other out — they would net to zero — so those committees would not achieve the very large savings that the Ryan budget calls on them to achieve.  The mandatory savings that the Ryan budget calls for in Function 500 (Education, Training, Employment, and Social Services) would not materialize, either.

The same would happen if it was the Appropriations Committees that took the step of repealing mandatory Pell funding: the repeal would count as savings, but spending those savings would be an offsetting cost, so the action would do nothing for appropriators trying to hit their funding targets.

Finally, if the authorizing committees repealed the mandatory savings and the Appropriations Committees appropriated those savings for Pell Grants, then the authorizing committees could use those savings to meet their savings targets but the additional discretionary appropriations of $101 billion over ten years would breach the existing NDD caps and would vastly exceed the much lower NDD caps that the Ryan budget would establish (unless the additional Pell appropriations were offset by extremely deep cuts in other NDD programs).

Fundamentally, policymakers cannot use the savings achieved by repealing mandatory Pell Grant funding both for deficit reduction (as the Ryan budget does) and to increase funding for discretionary Pell Grants; to do so would require double-counting the savings.

Neither the President’s budget nor Chairman Ryan’s budget adequately addresses the long-term Pell shortfall.  But the Ryan approach clearly is much more unfavorable for Pell Grants.  The Administration’s budget covers the 2014 Pell funding needs and slightly reduces the funding shortfall over the coming decade to $51 billion, while avoiding cuts in benefits or eligibility that could make college less affordable for many low-income students.  The Ryan budget, in contrast, cuts Pell benefits and eligibility, yet still enlarges the shortfall to approximately $161 billion.  That, in turn, would force policymakers either to cut other non-defense discretionary programs by an additional $161 billion in order to fund Pell Grants or to enact another $161 billion in benefit and eligibility cuts in Pell Grants themselves, with significant consequences for the ability of low-income students to afford college.

[3] The Obama budget measures the Pell shortfall relative to a 2012 freeze level, rather than to the 2012 funding level adjusted to reflect the annual increases in the NDD caps, which are slated to roughly keep pace with inflation.  This approach shows a $78 billion shortfall (see Fiscal Year 2013 Analytical Perspectives, Budget of the United States Government, Table 14-9), since it assumes discretionary Pell Grant funding is frozen throughout the decade at the 2012 nominal level.  Under standard CBO baseline budgeting, funding for discretionary programs is assumed to keep pace with inflation from year to year, and Pell funding would thus be expected to receive modest annual increments.  Our analysis uses the lower shortfall figure of $58 billion because the NDD caps, like a baseline, are not frozen but rise modestly from year to year, and it is reasonable to use a measure that assumes Pell discretionary funding rises at the same rate as the NDD caps.