Among the various tax and spending measures scheduled to expire at the end of this year, the temporary payroll tax cut enacted in 2010 and emergency federal unemployment insurance (UI) are among the most cost-effective at supporting the economic recovery without endangering efforts to control long-term deficits and debt.  Given the state of the economy, policymakers should extend both of them for another year.

If the payroll tax cut ends abruptly as scheduled on December 31, the paychecks of the average working family will shrink by roughly $1,000 over the course of 2013, putting downward pressure on consumer spending when the economy remains vulnerable.  Goldman Sachs estimates that this alone would slow next year’s economic growth rate by 0.6 percent.[1]   Slower growth, in turn, would put upward pressure on unemployment.  For these reasons, Larry Summers, former director of the National Economic Council under President Obama, stated last week that “this is not the right moment to repeal the payroll tax cut.”[2]

Emergency UI benefits, delivered through the Emergency Unemployment Compensation (EUC) program, have a particularly high “bang-for-the-buck.”  Roughly 2 million people receive an average of $300 per week in EUC benefits; abruptly ending the program at the end of the year would take critical spending out of the economy.  (While EUC originally allowed people to complete whichever of the four benefit “tiers” they were in when the program expired, Congress’s latest extension of the program calls for a “hard” cut-off that ends benefits immediately for all recipients at the end of December.)  Policymakers have created a temporary federal UI program in every major recession since 1958 and have never allowed it to expire when the unemployment rate was higher than 7.2 percent.

The economic recovery is still struggling to gather momentum because demand for goods and services has been growing too slowly.  Weak sales growth has deterred businesses from creating jobs and the unemployment rate remains too high.[3]   The payroll tax cut and emergency UI raise the incomes of those who are likely to spend most of it:  working families and unemployed workers.  Without these measures, spending would be lower and job creation would be weaker.

Both the payroll tax cut and the emergency UI program are emergency measures designed to expire once the economy is stronger, and they should remain strictly temporary in nature.  The cost of emergency UI will fall as the economy recovers and state unemployment rates improve, since fewer unemployed workers will need extended benefits.  Because payroll tax receipts go into the Social Security trust funds, some are understandably wary of any extension of the payroll tax cut.  However, offsetting contributions to the trust funds from general revenues have held the trust funds harmless from the reduction in payroll taxes.  This arrangement does not pose a danger as long as it remains strictly temporary; the greater risk is the economic damage that an abrupt expiration would cause.

As part of a bipartisan agreement in late 2010 that extended expiring tax cuts and emergency federal UI, policymakers replaced the Making Work Pay Tax Credit (targeted to low- and middle-income working households, who are most likely to spend additional increments of income) with a two-percentage-point reduction in the employee share of the Social Security payroll tax, from 6.2 percent to 4.2 percent.  The measure offset the loss of Social Security revenues with transfers from other government accounts, so the Social Security Trust Fund was not affected.  Policymakers later extended the measure for 2012.

The non-partisan Urban-Brookings Tax Policy Center estimates that the average tax cut for working families was $921 in 2012.[4]  Table 1 shows the impact on people in various illustrative occupations.

Policymakers created the EUC program in June 2008 in response to the most recent recession.  When unemployment is high during recessions and in the early stages of recoveries while unemployment remains high, the federal government has historically funded additional weeks of emergency benefits for workers who have exhausted their regular state-provided UI benefits.  Policymakers have since extended EUC several times; under the most recent extension, which reduced the maximum number of weeks of additional benefits available through the program, it is scheduled to expire at the end of 2012.

While the House and Senate have debated extending various tax provisions set to expire at the end of the year— most notably the income tax cuts first enacted in 2001 — neither party has proposed to extend the payroll tax cut, in part or in full.  This has raised concerns: 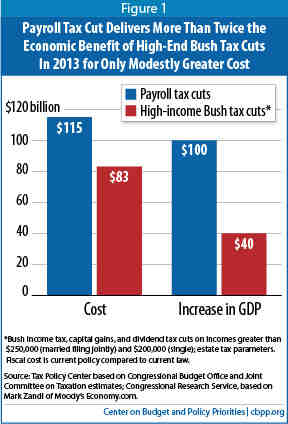 As for the payroll tax cut, extending it in 2013 would cost $115 billion, and Zandi estimates this would boost the economy by $100 billion — which means the payroll tax cut’s economic bang-for-the-buck is nearly twice that of the upper-income tax cuts.  The reason is simple: much of the payroll tax cut goes to low- and middle-income households, whose spending rises more in response to increases in their income than does wealthier people’s.[10]

Extending the emergency UI program delivers even greater economic stimulus per dollar of budgetary cost.  Mark Zandi estimates that at a cost of about $40 billion for 2013, extending EUC would boost the economy by $58 billion next year.[11]   Depending on the state of the labor market at year-end and the specific provisions in any extension legislation, the cost could be less, but the bang-for-the-buck would be the same.

These realities suggest a policy approach that would balance short- and long-term economic and fiscal factors.  Allowing the high-end Bush tax cuts to expire would pose little near-term economic risk and be a good first step toward addressing long-term deficits, because extending those tax cuts would cost nearly $1 trillion over the next decade alone.  Meanwhile, extending the payroll tax and emergency UI benefits for one more year would provide cost-effective support for the economic recovery but pose no long-term fiscal risk because both provisions would end, rather than becoming permanent parts of the fiscal landscape.

[1] On a Q4/Q4 basis.  Joe Weisenthal, “GOLDMAN: A Significant Tax Hike Is Coming, And Neither Party Is Even Talking About Stopping It”, Business Insider, October 9, 2012, http://www.businessinsider.com/goldman-on-fiscal-retrenchment-2012-10.

[5] Bureau of Labor Statistics 2011 National Occupational Employment and Wage Estimates,
http://www.bls.gov/oes/current/oes_nat.htm#45-0000. Figures are mean average annual wages in 2011. These figures are used as a proxy for 2012 income to estimate the payroll tax effect.

[6] The provision affects two percentage points of the employee share of the Social Security payroll tax. The amount of
wages subject to this tax is capped at $110,100 in 2012. This implies a maximum tax cut under the provision of $2,202.

[7] Joe Weisenthal, “GOLDMAN: A Significant Tax Hike Is Coming, And Neither Party Is Even Talking About Stopping It,” Business Insider, October 9, 2012, http://www.businessinsider.com/goldman-on-fiscal-retrenchment-2012-10.

[10] The Making Work Pay credit was even better targeted to low- and moderate-income families than the payroll tax cut and therefore had even higher bang-for-the-buck.