Several dozen temporary tax-expenditure provisions, collectively known as “tax extenders” because Congress routinely extends them, are set to expire again at year’s end.  More such provisions expire at the end of 2014.  Given the importance of addressing mid-term and long-term deficits, policymakers should make a firm commitment to pay forany extension of these provisions.

Policymakers are negotiating a package to ease the sequestration budget cuts over the next couple of years and to pay for the cost of doing so.  In coming weeks, policymakers also will seek to extend relief from the scheduled deep cuts in Medicare payments to physicians, and — as they have done in each of the past few years — they will offset that cost as well.  The tax extenders should be no different.

Paying for those “extenders” that Congress continues would have a significant impact on long-term deficits.  The publicly held debt amounted to 75 percent of GDP (gross domestic product) in 2013, and we project that it will climb under current policies to 99 percent of GDP in 2040.[1]  (This estimate assumes the extenders are continued but not paid for.)  If policymakers offset the roughly $50 billion-a-year cost of continuing the extenders, the debt-to-GDP ratio will rise about 8 percentage points less, reaching 91 percent in 2040.  An eight-percentage-point improvement would eliminate about one-third of the projected rise in the debt ratio by 2040 under current policies, far from sufficient to address long-term deficits and moderate the debt ratio but an important step toward accomplishing that.

Adopting this basic fiscal discipline would likely improve tax policy as well.  The temporary nature of the extenders, combined with the fact that policymakers generally haven’t offset their cost in the past, has arguably lowered the sound-policy threshold for enacting these measures.  Imposing the same type of fiscal discipline on the extenders that we impose on other budgetary measures would apply needed scrutiny.  In addition, the need to pay for continuing those extenders that withstand scrutiny should provide a vehicle to pare some highly inefficient tax subsidies, of which the tax code has no shortage.

Congress should adhere to this “pay-for” norm on tax extenders, whether it extends them in a stand-alone bill or as part of broader tax reform.  Paying for extenders as part of any tax reform effort is consistent with the official Congressional Budget Office (CBO) baseline, which assumes that the extenders will expire as scheduled.

Background on the Tax Extenders

The largest tax extenders include the general research and experimentation (R&E) tax credit and a provision that allows financial services firms to defer corporate taxation indefinitely on some foreign earnings.  Other extenders allow select industries such as retail, restaurants, and movie and television production to claim greater up-front tax deductions.  In addition to these corporate provisions, there are a number of individual tax extenders, the largest of which is the deduction for state and local sales taxes, as well as a group of energy tax extenders.

The individual alternative minimum tax (AMT) used to be a type of tax extender because its parameters were not indexed for inflation, so Congress needed to pass periodic “patches” to keep its reach from expanding dramatically.  With the exception of the Omnibus Budget Reconciliation Act of 1993, which made several changes to the AMT, policymakers have not paid for these AMT patches, citing their high cost and the need to protect millions of middle-class taxpayers from a tax increase.  And when the AMT patch was not paid for, neither were the extenders that were passed at the same time.

But the “fiscal cliff” legislation (the American Taxpayer Relief Act, enacted in January 2013) addressed the AMT issue on a permanent basis by indexing the AMT’s parameters.[3]  The fact that the large cost of patching the AMT is no longer part of the tax-extender package makes the goal of paying for the extenders much more attainable.

Tough policy choices will likely be needed in coming years to address the substantial deficits forecast for coming decades.  But seemingly minor fiscal adjustments can have a substantial impact in helping to address future fiscal imbalances.  Adopting a “pay-for” norm for the tax extenders would produce significant fiscal dividends.

Figure 1 shows that if the tax extenders are made permanent but not paid for (and no other changes in current policy are made), the debt as a percent of GDP will rise about 24 percentage points between 2013 and 2040, from 75 percent of GDP to 99 percent.  We project that if the cost of continuing the extenders is offset, however, the debt ratio will rise about 16 percentage points over that period, to 91 percent of GDP.  The resulting debt ratio will still be too high, and deficit-reduction action will be needed on a variety of other fronts.  Nevertheless, this would represent a significant contribution.  Simply paying for the tax extenders would erase about one-third of the expected climb in the debt-to-GDP ratio between now and 2040.

While policymakers generally have not paid for the tax extenders in the past, there have been a few notable exceptions.  For example, in 1990 and 1993, tax extenders were part of larger budget deals that shrank deficits by hundreds of billions of dollars,[4] and a smaller, stand-alone bill — the Tax Extension Act of 1991 — paid for the extenders it continued.[5]  Most important, as noted above, previous tax-extender packages generally included an extension of AMT relief, a must-pass measure with a price tag that made finding offsets more difficult.  In any event, for the past several years, policymakers have consistently adopted offsets for the cost of providing relief from scheduled cuts in Medicare payments to doctors.  They should do so here, as well, in the interest of equity and long-term fiscal stability.

While the primary reason to require offsets for the tax extenders is fiscal responsibility, such a move also should improve tax policy by subjecting these provisions to needed (and, in some cases, long overdue) scrutiny.  Policymakers may decide that some extenders are not worth maintaining.  And a commitment to paying for the extenders would nudge policymakers to address some weaknesses in the tax code as they searched for other revenues to offset the extenders.

Adopting a firm commitment to pay for those extenders that are continued thus would be sound policy on a number of fronts.

[1] See Richard Kogan, Kathy Ruffing, and Paul N. Van de Water, “Long-Term Budget Outlook Remains Challenging, But Recent Legislation Has Made It More Manageable,” Center on Budget and Policy Priorities, June 27, 2013, http://www.cbpp.org/cms/?fa=view&id=3983.  Our long-term projections incorporate estimates from the recent Social Security and Medicare trustees’ reports and the budget baseline that CBO issued in May 2013.  Note, however, that these figures do not reflect the recent revisions of GDP by the Bureau of Economic Analysis that show annual nominal GDP figures in the past several decades that are roughly 3 percent higher than before, leading to lower figures as percentages of GDP for revenues, outlays, and other historical budget figures than those presented in this paper.

[2] Congressional Budget Office, “Individual Income Tax Receipts and the Individual Tax Base — May 2013 Baseline,” May 14, 2013, http://www.cbo.gov/publication/44192.  This total includes CBO’s estimates of the costs of extending section 179 expensing and “other expiring tax provisions.”  It does not include the tax credit improvements enacted by the 2009 Recovery Act, which expire at the end of 2017.  It also does not include the extension of bonus depreciation, which we assume Congress will let lapse as the economic recovery strengthens, as Congress did after the economic recovery from the previous recession in the early 2000s. 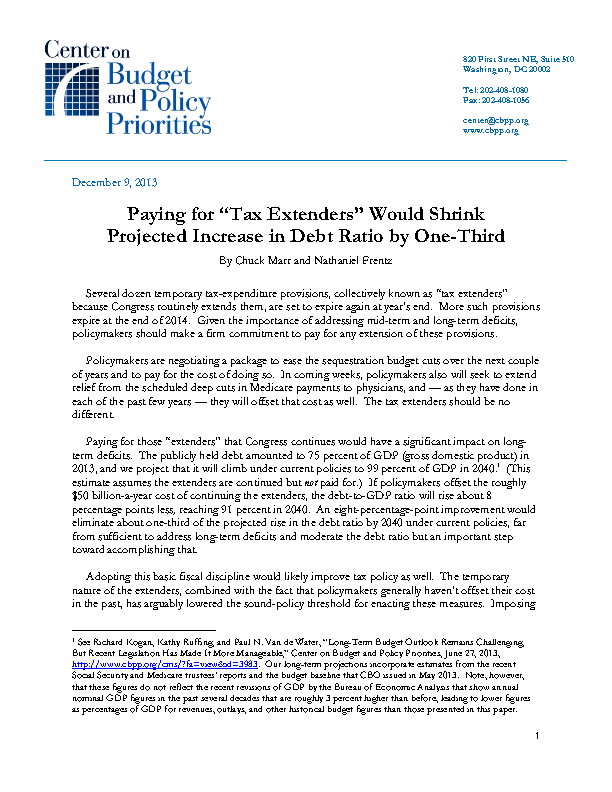