Fiscal year 2015 will almost inevitably be another year of shrinking real resources for non-defense discretionary (NDD) programs, which encompass all non-defense spending other than interest payments and entitlement programs.  In Congress’ negotiations over 2015 funding levels during the lame-duck session, the Budget Control Act (BCA) caps, as further reduced by sequestration, will continue to squeeze available funding.  Non-defense spending will once again fall in inflation-adjusted terms, approaching its lowest levels in at least five decades as a share of the economy.

These programs are now in the fifth year of an austerity drive that policymakers began in 2011.  Austerity came in three waves:  substantial cuts in the final 2011 appropriations legislation, the 2011 BCA’s binding annual caps on appropriations for ten years, and sequestration under the BCA, which took the form of across-the-board cuts in 2013 and reductions in the appropriations caps for subsequent years.

As a result, regular NDD funding fell by $41 billion between 2010 and 2014 before adjusting for inflation, through a combination of program cuts and use of offsetting savings.  After adjusting for inflation, the four-year cut was $87 billion or 15 percent. [1]  Many programs were cut by substantially more than 15 percent.  And numerous programs that didn’t absorb large dollar cuts nevertheless faced a steady squeeze as their costs (which often rise with inflation) increased while funding did not (or didn’t rise commensurately).

The dramatic effect of this austerity is evident when measuring spending relative to the economy or gross domestic product (GDP) — the standard way to make budgetary comparisons over long periods of time.  Spending for these programs stood at 3.4 percent of GDP in 2014, well below the 3.8 percent average over the five decades since 1962 (which is as far back as comparable data are available).[2]

This trend will continue in 2015 and beyond under the BCA caps and sequestration.  The Congressional Budget Office (CBO) estimates that NDD spending will drop to 3.3 percent of GDP in 2015 and 3.1 percent in 2016, equaling its lowest level on record.[3]  Put another way, the share of national income going to these programs — in education, science, infrastructure, environment, medical care for veterans, human services, homeland security, and other fields — is rapidly approaching the lowest level (measured as a share of the economy) in at least five decades.  (See Figure 1.) 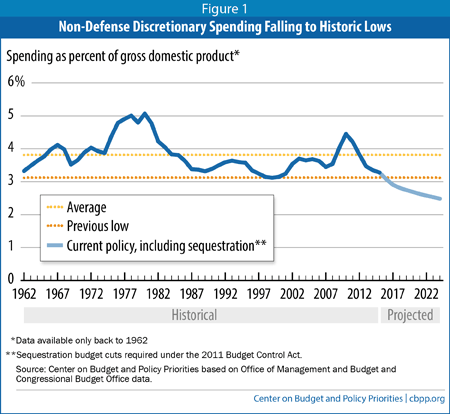 The Bipartisan Budget Act of 2013, negotiated by House Budget Committee Chair Paul Ryan and Senate Budget Committee Chair Patty Murray, modestly raised the BCA cap for NDD funding in 2015.  But even with this increase, the 2015 level is only $583 million or 0.1 percent higher than the 2014 cap before adjusting for inflation.  Because inflation is significantly higher than 0.1 percent, this means that in inflation-adjusted terms, funding is slated to fall by roughly $10 billion in 2015.

The situation is even tighter than these figures imply.  The small dollar increase allowed for 2015 will be more than consumed by a technical factor beyond the Appropriations Committees’ control:  the decline in estimated receipts from Federal Housing Administration (FHA) mortgage insurance programs, which help offset NDD funding.[4]  CBO estimates that FHA receipts will fall by $2.9 billion from 2014 to 2015 because the volume of FHA-insured loans is declining as the private mortgage market recovers.  This has the same effect as a $2.9 billion reduction in the BCA cap for 2015, leaving less room under the cap to fund programs.

Taking just these two factors into account, as well as the small nominal increase in the cap, the Appropriations Committees will need to find roughly $3.5 billion in net new cuts and additional offsets relative to 2014 funding levels to stay within the BCA cap.

In addition, policymakers have identified several different priorities for increased funding over the 2014 level, which would necessitate offsetting savings elsewhere.  A number of programs receive increases in both the House and Senate versions of the 2015 appropriations bills (though sometimes to varying degrees) — such as air traffic control and other Federal Aviation Administration operations, weather satellite replacement, veterans’ programs not covered by advance appropriations (such as processing disability claims), border security, and the Indian Health Service.  Every such increase necessitates cuts (or larger cuts) in other NDD programs.

It’s worth noting that even where a 2015 appropriations bill includes funding increases in a priority area, in many cases funding remains below levels of a few years ago.  For example, the Senate 2015 Labor-Education-HHS appropriations bill would increase funding for the National Institutes of Health (NIH) by $606 million relative to the 2014 level, not adjusted for inflation.  Yet even with this sizable increase, NIH funding would remain $258 million below its 2010 level before adjusting for inflation and $3.5 billion (10 percent) below its 2010 level after adjusting for inflation.  Similarly, the Senate bill includes a modest increase in job training grants to states — which were recently overhauled and re-authorized on a bipartisan basis — but funding for these grants would still be $345 million below its level five years ago, before adjusting for inflation.

Meeting these and other needs within the BCA cap will be challenging, particularly in light of the declining FHA receipts.  The Senate versions of the 2015 bills take some steps that can help, including making greater use of offsetting savings from mandatory programs (those not funded through the appropriations process) and covering part of the cost of fighting forest fires (which has risen in recent years) outside the caps.  But even with these measures, new rounds of cuts in some programs are virtually certain.

[1] Part of the reduction reflects a decline in Census Bureau funding after the 2010 decennial census and increases in receipts from Federal Housing Administration mortgage insurance programs and certain changes in mandatory programs.  Excluding these factors, the inflation-adjusted cut in NDD funding from 2010 to 2014 was 10 percent.

[2] This analysis is done using outlays (spending) rather than budget authority (funding) because the historical data for outlays go back further and are less susceptible to comparability problems.  Figures reflect all non-defense, non-entitlement outlays, including those for overseas contingency operations, emergencies, disaster relief, and the Highway Trust Fund, funding for which is exempt from the BCA caps.

[3] These figures come from the latest CBO baseline estimates, made in August 2014, and assume compliance with the BCA caps as reduced by sequestration.

[4] Under budget rules, the amount by which the receipts from the FHA mortgage insurance programs exceed expected program costs (including expected defaults, which the insurance will have to cover) is credited to the relevant appropriations bill.  This crediting effectively increases the overall level of discretionary funding that can be provided while still meeting the BCA caps. 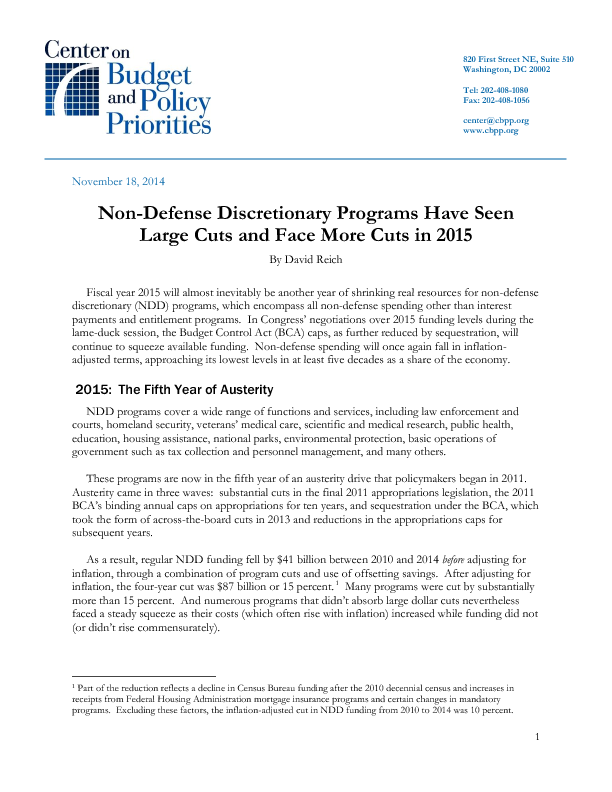 David Reich is a consultant working on issues related to federal appropriations and the federal budget process.

Reich was at the Center between 2014 and 2018, and left to become counsel to the Democratic co-chair of the congressional Joint Select Committee on Budget and Appropriations Process Reform. He worked for more than 17 years on the staff of the House Appropriations Committee, where he held a variety of positions including Committee Counsel and Democratic Staff Director for the Labor, HHS and Education subcommittee and the Financial Services and General Government subcommittee. Previously, he was Chief Counsel and then Minority Counsel for the House Budget Committee and a staff member at the House Democratic Study Group.

He holds a law degree from Georgetown University and an MA in economics from American University.