States have enacted deep cuts in education, health care, and other important public services in their budgets for fiscal year 2012 (which begins July 1 in most states). It is the fourth year in a row of budget-cutting for states, and the 2012 cuts are deeper than in past years. Of the 32 states that have enacted budgets, as least 24 are imposing significant cuts. These cuts will delay the nation’s economic recovery and undermine efforts to create jobs.

These enacted budget cuts will cause hundreds of thousands of Arizona families to lose health insurance, force the shortening of the school year for 86,000 preschoolers in Georgia, sharply increase university tuition in North Carolina and Washington, and cost jobless disabled individuals in Michigan one-quarter of their cash assistance, among a range of other impacts.

These and other budget cuts for 2012 are resulting principally from the lingering effects of the long and deep recession, which are causing tax collections in most states to remain well below pre-recession levels (despite modest recent improvements) and to lag far behind the growing cost of maintaining existing services. The cutbacks in services that many states enacted are not entirely necessary, because they have been exacerbated by federal and state actions and failures to act. The federal government, for example has provided $165 billion in emergency health and education funding to states, primarily through the 2009 Recovery Act, but those dollars are mostly ending June 30. For their part, many of the states that will implement very deep cuts in 2012 have failed to raise new revenue to replace some of the revenue lost to the recession. Some states even added to the cutbacks needed by reducing corporate taxes or other taxes — an ineffective strategy for improving economic growth that likely will do more harm than good.

Moreover, many of the services being cut are important to states’ long-term economic strength. For instance, research shows that in order to prosper, businesses require a well-educated, healthy workforce. Many of the state budget cuts described here will weaken that workforce in the future by diminishing the quality of elementary and high schools, making college less affordable, and reducing residents’ access to health care. In the long term, the savings from today’s cuts may cost states much more in diminished economic growth.

As of June 27, a total of 32 states have enacted their budget for the coming 2012 fiscal year. Three-fourths of these states — at least 24 of 32 — are making major cuts to important public services. Five of the remaining six states did not have a shortfall that they needed to close for fiscal year 2012; the sixth state — Hawaii — raised substantial revenues to balance its budget and avoid crippling cuts. Examples of the kinds of cuts enacted include the following:

These are just a few examples; more are emerging daily as additional states finalize their budgets and as the full ramifications of enacted budgets become clear. In their budget proposals for 2012, the large majority of governors proposed spending levels below 2008 spending levels, adjusted for inflation, even though there are more children enrolled in public school, more students in public universities, more families qualifying for Medicaid, and more people using other state services than there were in 2008. Overall, governors proposed 2012 spending levels of 9.4 percent below 2008 levels, adjusted for inflation; while legislatures are making some changes, it is unlikely that the overall trend will be very different from what governors proposed.

The cuts states enacted have been mitigated modestly — but only modestly — by recent improvements in the outlook for state finances.

State revenues are showing the clearest signs of recovery yet. At least 20 states have reported that tax collections for the current fiscal year will exceed the amount expected when their budgets were originally adopted last spring.

Despite this encouraging news, states are just beginning to emerge from a deep fiscal hole, and that recovery will be a slow process. The recession brought about the largest collapse in state revenues on record. As of the first quarter of 2011, revenues remained roughly 9 percent below pre-recession levels. Plus, the economy remains weak, unemployment is still high, and state fiscal recovery tends to lag behind recovery in the broader economy.

Consequently, even though the revenue outlook is better than it was, states still are addressing very large budget shortfalls. Some 42 states and the District of Columbia still face a combined shortfall of $103 billion in budget gaps.[2] These gaps come on top of the large shortfalls the states faced in fiscal years 2009 through 2011. States will continue to struggle to find the revenue needed to support critical public services like education, health care, and human services for a number of years. Among other impacts, this means that state actions will continue to be a drag on the national economy, threatening hundreds of thousands of private- and public-sector jobs and reducing the job creation that otherwise would be expected to occur.

States Imposing Deeper Cuts Than Necessary That Will Harm Economy

Because states still face these very large budget gaps, their best strategy will remain a balanced combination of modest spending cuts, new revenue measures to strengthen the revenue recovery, and (in a few states) utilization of remaining reserves. Instead, most states that have enacted budgets so far relied almost entirely on cuts to close their shortfalls — making the cuts they imposed deeper than necessary and impeding the economic recovery.

Only a few states raised revenue to help resolve their fiscal year 2012 budget shortfalls. Hawaii, for example, raised over $600 million in new tax revenue over the biennium by limiting tax exemptions for businesses and by eliminating the standard deduction and capping itemized deductions for higher-income individuals, among other actions. Illinois lawmakers enacted personal and corporate income tax increases to help address the state’s budget shortfalls for the current and upcoming year.

A few states made their problems worse by cutting taxes. Georgia, for example, enacted nearly $100 million in tax cuts, including $46 million to allow top income earners to claim unlimited itemized deductions on their income taxes. And Arizona reduced the corporate income tax rate and commercial property taxes, costing the state $38 million in fiscal year 2012, or 4 percent of the state’s 2012 budget shortfall.[3]

The cuts states have imposed since the recession began have impeded the nation’s economic recovery and cost hundreds of thousands of private-sector and public-sector jobs. State and local governments have cut 535,000 jobs in education and other areas since August 2008 and are forecast to continue to cut tens of thousands of additional positions each month. In addition, deep cuts in funding for services create a cycle of job loss in the private sector. When schools, universities, health agencies, police departments, and other units of government cut their budgets, they cancel contracts with private vendors and eliminate or lower payments to businesses and nonprofit organizations that provide direct services. As a result, the companies and organizations doing business with the state have less money to spend on salaries and supplies and may reduce the salaries of their workers or lay them off. When workers receive lower pay or lose their job, they consume less, and the ripple effect continues throughout the state’s economy, costing even more jobs. 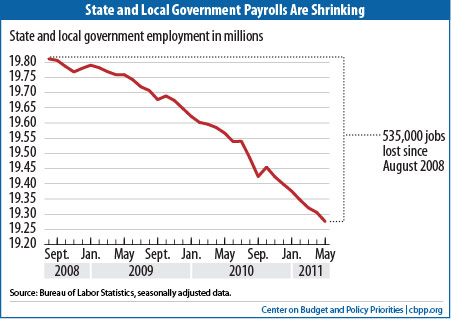 Even more significant may be the long-term effects of the 2012 cuts. Reducing access to pre-school or to higher education, for example, can undermine a state’s long-term economic competitiveness by reducing the quality of its workforce — which economists and business leaders repeatedly invoke as a key ingredient in state economic success.

Until now, federal assistance has lessened the extent to which states need to take actions that further harm the economy. The 2009 Recovery Act and the August 2010 jobs bill provided about $165 billion over a roughly 2½-year period to reduce the extent of state spending cuts and state tax and fee increases. But these funds nearly all expire at the end of June 2011. One way to avert the need for these kinds of cuts, as well as additional tax increases, would be for the federal government to reduce state budget gaps by extending emergency Medicaid funding over the period during which state fiscal conditions are expected to remain problematic. But such an extension appears to be only a remote possibility.

Moreover, federal policymakers are now considering some actions that could further deepen states’ fiscal problems in 2012 and in 2013 (for which states are also projecting budget shortfalls and therefore additional cuts). In pursuing deficit reduction, federal policymakers are considering deep cuts in discretionary programs, which would force significant reductions in federal support for services provided by state and local governments. Such actions would worsen state budget problems, deepen the size of spending cuts (and state tax and fee increases) and thus slow economic recovery even further than is already likely to occur.

[1] Job loss figures from oral testimony given by the state superintendent to the Joint Budget Legislative Committee at a public hearing on September 21, 2010 and communicated to the Center on Budget and Policy Priorities by the Mississippi Economic Policy Center.

[3] By fiscal year 2018, the cost of the tax cuts Arizona enacted will balloon to $538 million, half of which will result from the corporate tax rate cut. 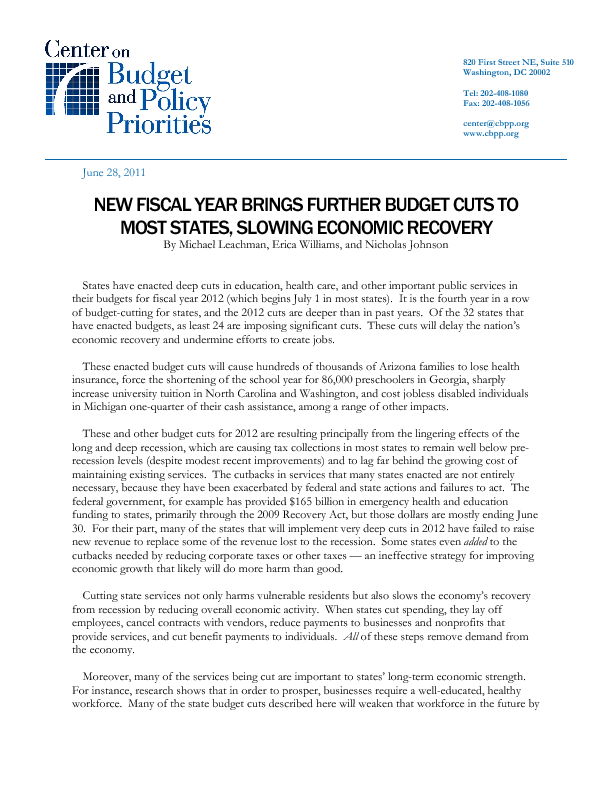