The charges are false.

What the Provisions at Issue Would Actually Do

The charges revolve around two provisions of the health legislation that is headed to the House floor.

1.  The Provision Dealing with “Citizenship Documentation”

Undocumented immigrants have never been eligible for Medicaid (other than for some emergency medical care) or SCHIP.  Eligible legal immigrants have always been required to provide various documents to prove that they have legal status and that their particular legal status lets them qualify for Medicaid under federal law.  In addition, any citizens whose citizenship is in question have always been required to prove it.  In 2005, Dr. Mark McClellan, then-Administrator of the Centers for Medicare and Medicaid Services, wrote that this policy “allows states to enroll eligible individuals while preserving program integrity.”[2]

In 2006, however, Congress changed the law.  A proposal authored by Rep. Deal and the late Rep. Charles Norwood requires every citizen child and parent receiving or applying for Medicaid to provide an original birth certificate, passport, or similar document to prove his or her citizenship.  Congress enacted the provision even though Dr. McClellan had indicated there was no evidence that it was needed.

Supporters said the provision was necessary to keep undocumented immigrants out of Medicaid and that it would have no impact on citizens.  Studying the issue in 2005, however, the Department of Health and Human Services’ (HHS) Inspector General did not find evidence of a problem.[3]  As Dr. McClellan, who was CMS Administrator at the time, noted concerning the Inspector General’s report, “The report does not find particular problems regarding false allegations of citizenship, nor are we aware of any.”[4]

Furthermore, the results of the provision have proved just the opposite of what Rep. Deal forecast:  Tens of thousands of children who are U.S. citizens have been shut out of the program because their parents lacked ready access to a birth certificate or passport, while virtually no undocumented immigrants have been identified.

Governors have sharply criticized the provision.  In a letter last month to leaders of both parties on the House Energy and Commerce Committee, California Gov. Arnold Schwarzenegger wrote that it has increased state administrative costs, put barriers in the way of eligible applicants, and “created a situation where U.S. citizens actually have fewer rights than non-citizens when applying for Medicaid benefits”[9] (in that the documentation requirements now imposed on citizens have proved more difficult for many of them to comply with than the substantial documentation requirements placed on eligible legal immigrants).

A provision of the House bill is designed to give states flexibility to address these problems without allowing undocumented immigrants into Medicaid.

The provision responds to requests from governors in a number of states – including Oklahoma, Washington, New Mexico, Wisconsin, Michigan, Oregon, Virginia, Maryland, Pennsylvania, New Jersey, New York, Massachusetts, and California, among others – for greater flexibility in this area.  The National Association of State Medicaid Directors also called for such a change.

Rep. Deal claims that if subsequent legislation allows undocumented immigrants to legalize, they will be able to get Medicaid and SCHIP due to this provision.  That is not correct.  Any future legislation that allows undocumented immigrants to legalize will itself set the rules for whether those individuals will qualify for benefits.

[8] An estimated 13 percent are from Asia, and 9 percent are from Europe, Africa, and other areas.  Jeff Passel, “The Size and Characteristics of the Unauthorized Migrant Population in the United States,” Pew Hispanic Center, March 2006. 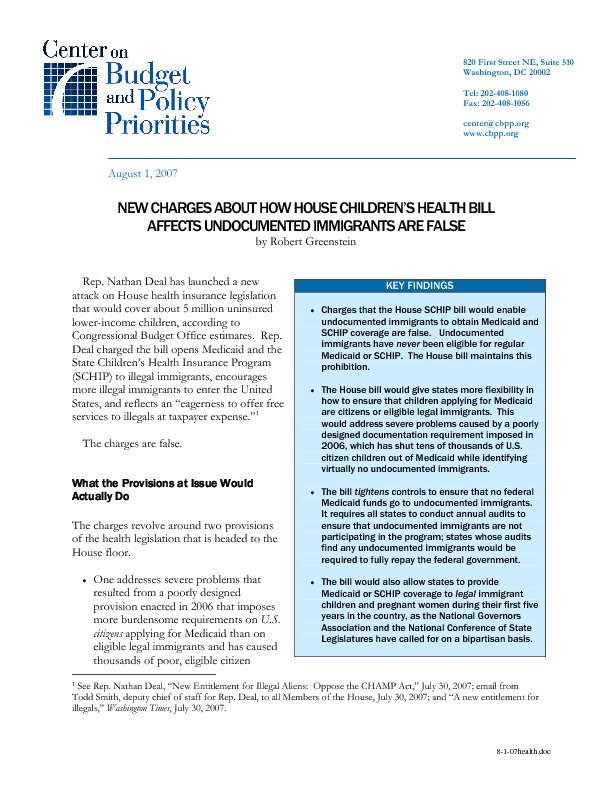