The Community Eligibility Provision is a powerful new tool to ensure that low-income children in high-poverty neighborhoods have access to healthy meals at school.  Established in the Healthy, Hunger-Free Kids Act of 2010, next year community eligibility will allow more than 28,000 schools in high-poverty neighborhoods to offer nutritious meals through the National School Lunch and School Breakfast Programs to all students at no charge.[1]  By eliminating school meal applications and fees, community eligibility streamlines meal operations, reduces administrative burdens for schools and families, and reduces stigma that children, especially teens, sometimes face if they eat school meals.

School districts can offer community eligibility district-wide or in selected schools within a district if more than 40 percent of their students are “Identified Students” — that is, approved for free meals without an application based on data from other programs, like the Supplemental Nutrition Assistance Program (SNAP, formerly the Food Stamp Program) that serve low-income children.

Most states have now published their lists of eligible schools and districts.  Those lists show that more than 28,000 schools serving predominantly low-income students are eligible to offer community eligibility for the next school year.  These schools represent more than one in five schools in the United States.  More than 3,000 school districts — one in five U.S. school districts — could offer community eligibility district-wide.[4] 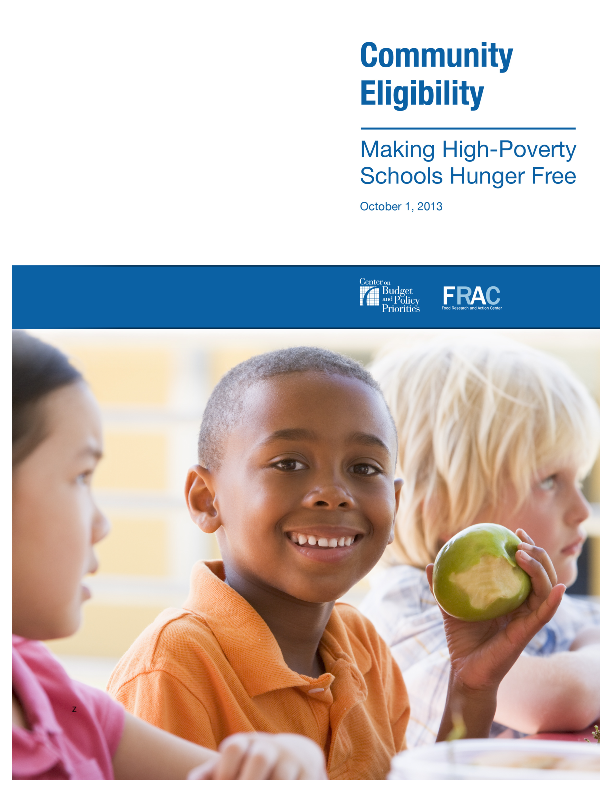 [5] For state lists of eligible school districts and schools, see “School Districts and Schools That Are Eligible for the Community Eligibility Provision,” Center on Budget and Policy Priorities, http://www.cbpp.org/ceplists.

guide . Additional resources related to the Community Eligibility Provision are available on the U.S. Department of Agriculture’s website at  http://www.fns.usda.gov/school-meals/community-eligibility-provision and on the website of the Food Research and Action Center at http://frac.org/federal-foodnutrition-programs/national-school-lunch-program/community-eligibility/.