There are good reasons to be concerned about projected increases in Medicaid expenditures over the long term, since health care costs continue to rise throughout the U.S. health care system and the U.S. population is aging.  The underlying problem, however, is not that Medicaid has unusually high or increasing costs, but that the provision of health care in the United States has become very expensive and that health care costs in the private and public sectors alike have been rising at a rapid clip and are expected to continue doing so for the indefinite future.  In recent years, costs per beneficiary have actually been rising at a slower pace in Medicaid than in other health care coverage, including both private health insurance and Medicare.  This analysis examines new data on Medicaid expenditure growth, especially in fiscal year 2006, which ended on September 30. 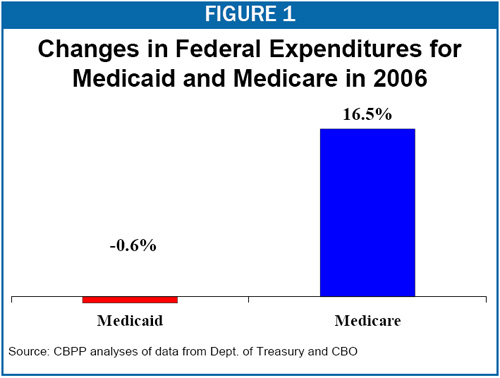 Private health insurance expenditures are estimated to grow about 5.5 percent in calendar year 2006.[4]   As shown in Figure 2, after adjustments to remove the one-time downward effect on Medicaid costs of the new prescription drug benefit, Medicaid expenditures are seen to have grown in 2006 at about half the rate that costs grew for Medicare and private health insurance.[5]

Costs Grew More Slowly in Medicaid in the Preceding Years, As Well

Because states pay a substantial fraction of Medicaid costs, they have strong incentives to hold Medicaid costs down. An analysis by economists at the Urban Institute estimated that it costs Medicaid about 30 percent less to cover an adult than it would cost if the same person were covered by private health insurance.[6]  In part, this is because Medicaid’s payment rates to health care providers are typically lower than those paid by Medicare or private health insurers.  In addition, state Medicaid programs typically use an array of cost containment approaches, including managed care, disease management, utilization review, prospective payment systems and the substitution of generic prescription drugs for brand name drugs.  Many of these cost containment initiatives were pioneered as reforms in state Medicaid programs and have been adopted more aggressively in Medicaid than in Medicare or the private sector.[7]

Why Was Medicaid Expenditure Growth Low in 2006?

Medicaid expenditures rose slowly in fiscal year 2006 in part because the number of enrollees apparently grew slowly in 2006.  A survey of Medicaid directors conducted for the Kaiser Commission on Medicaid and the Uninsured suggests that national Medicaid enrollment grew only 1.6 percent in state fiscal year 2006 (which usually ran from July 1, 2005 to June 30, 2006), about one-fourth as much as the average growth rate in enrollment of 6.9 percent per year from 2000 to 2004.[8]  This is consistent with recent Census data showing that there was no appreciable growth in Medicaid enrollment last year.[9]

Enrollment may have grown slowly because the number of low-income people financially eligible for Medicaid did not increase.  After several years of economic growth, the number of people with incomes below the poverty line stopped rising in 2005.  Medicaid enrollment also may have slowed because of eligibility reductions instituted by a handful of states — including Missouri, Tennessee, Mississippi, Florida and Ohio — and the accumulated impact of actions in a broader number of states where certain procedures that tend to impede Medicaid enrollment were instituted, such as shortening enrollment periods or increasing paperwork requirements.[10]

Other factors also may have contributed to the slow growth in Medicaid costs in 2006, although the detailed expenditure and enrollment data needed to analyze these factors are not yet available:

It should be noted that the Deficit Reduction Act, enacted in February 2006, had virtually no effect on Medicaid expenditures in 2006, since few of its provisions were in effect during the 2006 fiscal year.

Accounting for the Clawback Payments

While Medicare expenditure growth nationally was slightly negative in 2006, the patterns vary by state.  Estimated total Medicaid expenditures fell in 22 states in 2006, while rising in 29 states.  These variations are due to differences in economic conditions and Medicaid policies across the states.

Projections of Medicaid Growth in 2007

Medicaid expenditures are likely to climb at a slightly faster pace in 2007.  Recent projections of Medicaid growth in 2007 issued by the Congressional Budget Office, the Office of Management and Budget, the Kaiser Commission on Medicaid and the Uninsured, and the National Association of State Budget Officers range from 4.2 percent to 7.4 percent growth.  These projections center around 5 percent growth in 2007.

Federal and state Medicaid expenditure growth was low in 2006, and growth rates are expected to remain relatively modest in 2007, compared to the growth rates of earlier years.  In addition, the severe state budget pressures of 2001–2004 have eased for the time being because of higher state revenues as well as reduced Medicaid growth.  Economists have noted that overall health care cost growth has eased at least temporarily.”[19]

At some point, however, health care costs are expected to start rising again at a more rapid rate than the rate at which the economy is growing.  There consequently are good reasons to be concerned about projected long-term growth in Medicaid expenditures.

Most Americans expect to receive quality medical care and long-term care and look forward to having access to medical advances that will prolong life and improve health.  These medical advances generally add to costs.  Addressing the twin phenomena of escalating health care costs and high health care expectations is a problem that cannot be solved primarily through Medicaid.  It ultimately will have to be addressed as part of a broader national effort to reform the overall U.S. health care system.[20]

[2] We make the expenditures in both years comparable by adding an estimate of how much prescription drugs would have cost the Medicaid program if they had continued to be offered to dual eligibles through Medicaid during all of fiscal year 2006.  This estimate is derived from an estimate of the “clawback” payments that state Medicaid programs made to Medicare in calendar year 2006, as reported in Kaiser Commission on Medicaid and the Uninsured, “An Update on the Clawback: Revised Health Spending Data Change State Financial Obligations for the New Medicare Drug Benefit,” March 2006.

[4] Christine Borger, et al. “Health Spending Projections Through 2015, Changes on the Horizon,” Health Affairs, Web Exclusive, Feb. 22, 2006.  These are the estimates of the Office of National Health Estimates at CMS.

[8] Vernon Smith, op cit.  John Holahan and Mindy Cohen, “Understanding the Recent Growth in Medicaid Spending and Enrollment Growth from 2000-2004.” Kaiser Commission on Medicaid and the Uninsured, May 2006.

[10] Donna Cohen Ross and Laura Cox, “In a Time of Growing Need: State Choices Influence Health Coverage Access for Children and Families,” Kaiser Commission on Medicaid and the Uninsured, Oct. 2005.

[11] Center on Budget and Policy Priorities, “The Number of Uninsured Americans Is at an All-Time High”, August 29, 2006.  Paul Fronstin, “Sources of Health Insurance and Characteristics of the Uninsured: Analysis of the March 2006 Current Population Survey.” Employee Benefits Research Institute Issue Brief, Oct. 2006.

[17] This is close to the -0.6 percent estimate based on Treasury data, discussed earlier.  Different data sources yield slightly different estimates.  The Treasury data are more accurate in measuring federal outlays.