Lower Taxes and Economic Growth: Response to a Flawed Analysis

When the Speaker and other leaders of Florida’s House of Representatives released their plan to roll back property taxes and place a tight growth limit on state and local revenues, they included a report in their release by the firm of Arduin, Laffer & Moore that claims lower taxes will lead to higher economic growth. This report takes an extremely limited and simplistic view of what makes a state grow and the incomes of its residents increase.

It looks only at taxes, and ignores all other factors.  Yet businesses well understand that the other side of the equation — the public K-12 and higher education programs that provide an educated and productive workforce; roads and infrastructure; health care and environmental preservation and protection; public safety; and the quality of life that taxes buy — are equally important in determining the growth of a state and the decisions business leaders make on where to locate, grow and expand their businesses.

Even on the issue of taxes, there are many problems with this report and its use of data.

Because of these and other flaws in their analysis, the report fails to prove that lower property taxes — or lower taxes generally — would improve Florida’s economy.

The report claims that Florida’s economy would grow if the property tax were rolled back and partially replaced with a state sales tax increase.  The basis for the claim is an equation that is only partially described in the report.  It is described as determining the effect across states of the change in the tax burden — measured by the change in taxes per $1,000 of personal income — on real per capita personal income. It appears that the equation took into account only one other factor, which was national economic growth.  The report did not specify what years were used in this equation, or what measures of taxes were being considered.   Nor did it provide the specifications that would allow another researcher to determine its validity.   We have examined and attempted to replicate the results using data from 1980-2000 and 1990-2000.

We looked at several alternative equations that do not suffer from this flaw.  When we examine changes in both personal income and taxes on a per capita basis, the relationship becomes positive and stays statistically significant.  That is, the results show that a higher tax burden is related to more —  not less —  per capita income growth.  This is the opposite of the result claimed in the report.  As discussed below, this does not necessarily mean that higher taxes cause higher income growth, but only that there is a statistical relationship that is contrary to the statistical relationship posited in the report.  We looked at this relationship for all 50 states, excluding Alaska and Wyoming and for state and local taxes and total state and local general revenues for both 1980-2000 and 1990-2000.  We also included changes in national economic activity.

Thus, most or all of the claimed relationship between government revenues and income growth seems to be coming from how the authors have specified their equation.  Arduin, Laffer, and Moore have committed basic errors in examining this issue, invalidating their conclusions.

Limits of This Type of Analysis

Even if equations such as these find a relationship between higher or lower taxes and income growth, it is difficult to interpret the meaning of such a relationship.  A correlation found in this type of equation does not imply causation, nor does it imply the direction of the relationship.  For example, if economic growth in a state is strong, revenues may be growing and it becomes possible for the state to provide a tax cut without reducing public services.  Similarly, if there is a localized economic problem (that is not captured in the national economic trends, which is the only factor the equation in the report holds constant) such as the Michigan auto industry, the state may have to raise taxes to maintain education and other services.  In both of these cases, the economic performance was the cause of the tax change; the tax change was not the cause of the economic performance.  Indeed, given our estimates when we explicitly examined the affect of prior taxes on personal income growth and the effect of prior year income growth on taxes, there appears to be a positive relationship between the two factors. Moreover, to do a thorough job of exploring this topic, it would be important to control for more factors in trying to examine the relationship between taxes and growth, most notably controlling for more characteristics of the states examined, including information on their population and the level of services received.

The report results are at odds with the mainstream of economic research on the relationship of taxes and economic growth.  Most researchers find that reduced taxes can modestly spur economic growth.  But the effect is quite small, and depends on holding expenditures on public services constant— which rarely is possible in the real world.  And researchers also find that state expenditures on education, infrastructure, highways, and public health matter as much or more than taxes in determining economic growth rates.  Reduced taxes that are accompanied by reductions in spending on services that benefit the economy and businesses can have a negative effect on economic growth.

A Misleading Use of Averages

Table 3 in the Arduin, Laffer, and Moore report displays the ten highest-tax and the ten lowest-tax states along with a number of economic variables over the 1995-2005 period.  This table, which is used to support a claim that lower taxes lead to higher growth, masks a great deal of information.  Such presentations, with rankings and averages, are often misleading.  The results often depend on the years used, the number of states put in the different categories, and whether one looks at averages or medians.  In this case, a small modification in presentation could reach the opposite conclusion on some of the measures.

Moreover, the per capita income growth experienced by both the lowest and the highest tax states was substantially above the median per capita income growth for all states, which was 50.8 percent.  (See table below.  Note that we were not able to exactly replicate the data in the report, which lacks footnotes to explain the origins of the data.  A full table of all the states and measures used in the original report with the correct data and data sources is provided in Appendix 2.)

There was more population growth in the five low-tax states and this growth was reflected in the migration numbers and affected the measures of total personal income and total growth in Gross State Product.   But the economic performance numbers that did not depend on population growth  — per capita personal income, employment growth, and unemployment rate were equally favorable among the five high tax states as in the low tax states.

One gets such mixed results — and such different results from using a different number of states — because the determinants of economic growth are far more complicated than just tax levels, and many variables have to be considered if one wants to account for economic growth.   At a minimum, tables such as Table 3 do not “prove” that tax levels in the absence of all other considerations affect economic growth.

Yet another point concerns the time frames used in the table.  As noted above, correlation does not prove causation, and there always is an issue of which direction the causation, if any, flows.  In the case of Table 3, the tax levels were for 2004.  Yet the economic variables were measured from 1995 to 2005.  It makes no sense to suggest that 2004 tax levels had an impact on economic growth in 1996 or 2000.  If one thinks such a comparison such as the one in Table 3 is valuable, one would have to look at tax levels in some period before the period of the economic performance that is being considered.

Read the Appendix on Technical Information about Econometric Analysis

Iris Lav is deputy director of the Center on Budget and Policy Priorities.  Kim Rueben is a senior research associate at the Tax Policy Center, a joint venture of the Urban Institute and the Brookings Institution.

For more information about what we examined see Appendix 1.

A recent interpretive survey of the literature by Northwestern University Economist Therese McGuire finds that the results of research on interregional differences in taxes is mixed; depending on the decade studied and the measures used, one can find significant effects of taxes on economic growth or not.  Timothy Bartik, Senior Economist at the W.E. Upjohn Institute for Employment Research, finds that “Equally competent research projects may get widely divergent estimates of the economic development effects of fiscal variable.”  Literature that shows expenditures matter include a well-regarded early study by Jay Helms, and a later review by Ronald Fisher.  Economist Robert Lynch reviews the literature and finds that increases in taxes, when used to expand the quantity and quality of public services, may promote economic development and economic growth.  Therese J. McGuire, “Do Taxes Matter? Yes, no, maybe so,” State Tax Notes.  Vol. 28 No. 10, June 9, 2003; Timothy Bartik, New England Economic Review, March/April 1997;  Jay L. Helms, “The Effect of State and Local Taxes on Economic Growth: A Time Series-Cross Section Approach, The Review of Economics and Statistics, Vol. 67, No. 4, November 1985; Ronald C. Fisher, “The Effects of State and Local Public Services on Economic Development, New England Economic Review, March/April 1997; Robert Lynch, Rethinking Growth Strategies: How State and Local Taxes and Services Affect Economic Development, Economic Policy Institute, 2004. 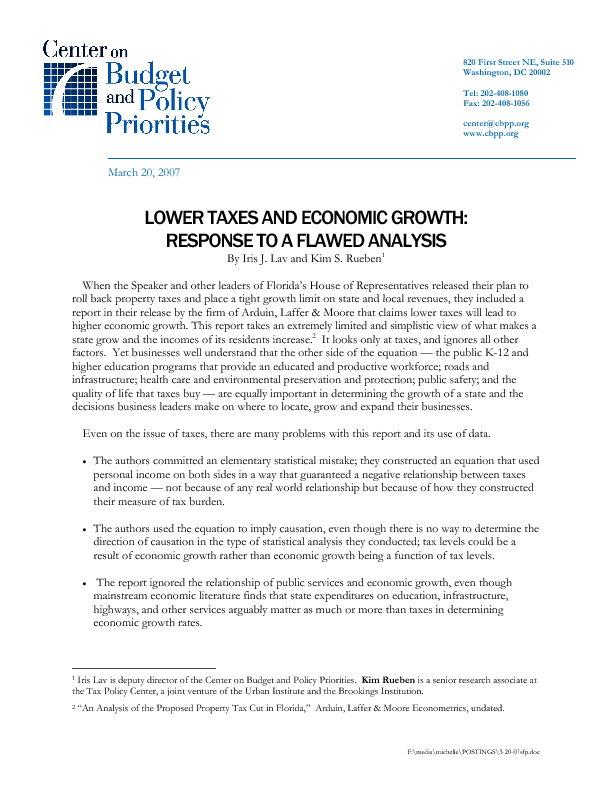