Failure by Congress to extend the temporary payroll tax cut enacted last December would reduce all paychecks starting on January 1, withdrawing needed support from the still-weak economy. The measure, part of the tax cut-unemployment insurance deal between President Obama and Republican leaders, reduces the employee share of the Social Security payroll tax,[1] boosting workers' take-home pay by an estimated $120 billion in 2011. The tax cut is worth $934 to the average family. (The table below gives some examples of how the tax cut's expiration would affect workers in different occupations.)

Many economists have warned that letting the tax cut expire at the end of December would slow economic growth next year. To reduce the risk that the economy will continue to grow too slowly to lower unemployment or may even slide back into recession, policymakers should at a minimum extend the tax cut.

However, because the payroll tax cut is already in effect, extending it for a year would provide no new boost to the economy—it would simply prevent the withdrawal of existing support for economic growth. In light of continuing economic weakness, that's not enough: policymakers should accompany the extension with other actions that provide an immediate boost to growth. They could, for example, strengthen the payroll tax cut, such as by applying it to the employer share of the payroll tax in the case of new hires.

Policymakers should also enact other measures to support the weak economy, such as extending the federal emergency unemployment insurance program (which likewise is set to expire in December) and enacting other well-designed stimulative measures. (An examination of such other measures lies beyond the scope of this paper.)

According to the Tax Policy Center, the payroll tax cut is benefiting 121 million families this year,[2] increasing their paychecks by an average of around 1.7 percent. For the average family, this works out to $934 in additional take-home pay over the course of the year. The Congressional Budget Office has reported that "the increase in take-home pay [spurs] additional spending by the households receiving the higher income, and that higher spending … in turn increase[s] production and employment." [3]

A number of economists have recently warned that the U.S. economy is growing very slowly and is particularly vulnerable to shocks, and that allowing the payroll tax cut to expire could constitute such a shock. Economists at Goldman Sachs, for example, recently identified the tax cut's potential expiration as a significant threat to the U.S. economy;[4] they estimate that expiration of the payroll tax cut would reduce growth by as much as two-thirds of a percentage point in early 2012.[5] They also estimate that if both the payroll tax cut and extended unemployment benefits expire at the end of the year, the fiscal drag on the economy "will be intense in 2012."[6]

According to Mark Zandi, chief economist of Moody's Analytics, "If [the temporary payroll tax cut and extended federal unemployment benefits] are not extended, real GDP growth will be nearly a percentage point slower in 2012 and there will be approximately one million fewer jobs by year's end." [7] A separate Moody's report concluded that the potential for "failure to extend the payroll tax cut is a significant downside risk to the outlook for U.S. growth."[8]

Expiration Would Shrink Paychecks of Nearly All Working Americans

Failure to extend the payroll tax cut would harm workers in nearly every job and income category.[9] For example, the nation's 1.4 million truck drivers, whose salaries average $39,450, would pay $789 more in payroll taxes, on average. The nation's 2.7 million nurses, whose salaries average $67,720, would lose $1,354, on average. The table below provides additional examples.

Those increased tax payments would significantly reduce consumer purchasing power in every state. The table in the appendix provides Treasury Department estimates of how many people in each state are benefitting from the payroll tax cut in 2011 and how much they are receiving. In Ohio, for example, 5.7 million workers will receive $3.6 billion in higher take-home pay this year, and in Nevada, 1.2 million workers will see their paychecks increase by a combined $800 million. These 2011 figures provide a guide to the economic impact in various states of letting the tax cut expire.

The rationale for enacting the temporary payroll tax cut last December — the economy was weak and a payroll tax cut would provide a more efficient bang-for-the-buck than many other tax-cut options — has become still more compelling today, given the renewed signs of economic weakness.

At a time of soft economy-wide demand, the tax cut increases consumer purchasing power in a manner that is both substantial (boosting take-home pay by 2 percent for most workers) and modestly progressive, since the wage cap limits the benefit for higher-income families (who are more likely to save rather than spend the additional money; see Figure 1). 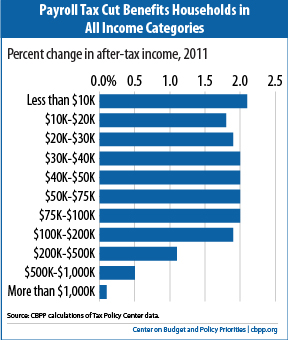 Largely for these reasons, Moody's Analytics estimates that every $1 reduction in federal tax revenue resulting from an employee-side payroll tax cut expands the economy by $1.27.[12] Of 16 tax-policy stimulus options that Moody's economists evaluated, the employee payroll holiday ranked second for effectiveness per dollar of cost, after continuation of the expansion of the refundable component of the Child Tax Credit, included in the 2009 Recovery Act (and now scheduled to expire at the end of 2012). [13]

While it might be preferable for Congress to return to the Recovery Act's tax structure and enact a refundable tax credit that better targets low-paid workers most likely to spend the money immediately and avoids any risks to Social Security finances, the likelihood of Congress approving such a policy is very low. A one-year extension of the payroll tax cut is highly preferable to the likely alternative — expiration without any replacement, which would reduce paychecks across the country at a vulnerable economic time.

To be sure, because the payroll tax cut is already in effect, extending it for a year would not provide a new boost to the economy. But it would prevent the withdrawal of some significant existing support for economic growth.

To achieve additional stimulus, policymakers could consider expanding the payroll tax cut. They could increase it from 2 percent of qualifying earnings to 3 or 4 percent, for example, or extend it to include the employer share of the payroll tax for new hires. The Congressional Budget Office ranks the latter option as particularly effective stimulus.[15] Alternatively, policymakers could continue the current tax cut but pair it with additional tax relief administered through the individual income tax code. [16]

By extending the payroll tax cut — and the provision of additional weeks of unemployment benefits to workers who have exhausted their 26 weeks of state-funded UI benefits without finding a job — policymakers can avoid increasing the risk of renewed recession. But they should do more to reduce the probability of a double-dip recession and increase the probability of a sustainable recovery that generates sufficient jobs to shrink the massive jobs deficit. While a discussion of various steps needed to shore up the economy is beyond the scope of this paper, in the payroll tax arena, policymakers should consider strengthening the payroll tax reduction as part of a larger set of economic measures.

[1] The tax cut reduces the employee's share of the Social Security payroll tax on earnings up to the maximum taxable amount of $106,800 a year from 6.2 percent of earnings to 4.2 percent. Employers continue to pay the employer share of the tax, an amount equal to 6.2 percent of workers' wages (up to the maximum taxable earnings amount). The tax cut also reduces the tax that self employed individuals pay from 12.4 percent of taxable earnings to 10.4 percent.

[9] According to the Social Security Administration's actuaries, about 94 percent of all jobs were covered by Social Security in 2007. See Table 1.2 at http://democrats.waysandmeans.house.gov/media/pdf/111/ssgb.pdf.

[10] Bureau of Labor Statistics 2010 National Occupational Employment and Wage Estimates. http://www.bls.gov/oes/current/oes_nat.htm#45-0000 Figures are mean average annual wages in 2010. These figures are used as a proxy for 2012 income to estimate the payroll tax effect.

[11] The provision affects two percentage points of the employee share of the Social Security payroll tax. The amount of wages subject to this tax is currently capped at $106,800. According to the 2011 Annual Report of the Board of Trustees of the Federal Old-Age and Survivors Insurance and Federal Disability Insurance Trust Funds, the maximum amount of wages subject to the tax is estimated to rise to $110,700 in 2012. This implies a maximum tax cut under the provision of $2,214. http://www.ssa.gov/oact/tr/2011/tr2011.pdf

[15] CBO ranked it relatively high for effectiveness on its list of job-creating policy options, although still behind providing additional weeks of unemployment benefits. Congressional Budget Office, "Policies for Increasing Economic Growth and Employment in 2010 and 2011," January, 2010, Table 1, http://www.cbo.gov/ftpdocs/108xx/doc10803/01-14-Employment.pdf.

[17] Note that this figure reflects all individuals benefiting from the tax cut, whereas the TPC figure cited above (121 million) refers to the number of households.