New data from the Congressional Budget Office (CBO) show that in 2006, the top 1 percent of households had a larger share of the nation’s after-tax income, and the middle and bottom fifths of households had smaller shares, than in any year since 1979, the first year the CBO data cover. As a result, the gaps in after-tax incomes between households in the top 1 percent and those in the middle and bottom fifths were the widest on record.

In addition, the share of national after-tax income going to the top 1 percent of households more than doubled between 1979 and 2006, rising from 7.5 percent to 16.3 percent.

Taken together with prior research, the new data suggest greater income concentration at the top than at any time since 1929. [2] The data precede the current recession, which is likely to reduce the income of the wealthiest Americans substantially, given the decline in the stock market, and thereby shrink somewhat the income gap between rich and poor households. But there was a similar development when the dot.com bubble burst a few years ago — income at the top of the income scale fell sharply — and it turned out to be just a speed bump. Incomes at the top more than made up the lost ground from 2004 to 2006.

Changes in Inequality Since 1979

The gap in income between the wealthiest Americans and all others has grown strikingly in recent decades, the CBO data show. In 1979, when the data begin, the average after-tax incomes of the top 1 percent of households were 7.9 times higher than those of the middle fifth of households. By 1989 they were 13.5 times higher.

The gap between the top 1 percent and the poorest fifth of Americans widened even more dramatically over this same period. In 1979, the incomes of the top 1 percent were 22.6 times higher than those of the bottom fifth. Top incomes continued climbing to 63.1 times higher in 2000 and 72.7 times higher by 2006 — more than tripling the rich-poor gap in 27 years.

Trend of Rising Inequality Continued in 2006

The new data CBO released for 2006 show that income inequality widened significantly over the previous year. After-tax incomes rose by more than twice the rate among the top 1 percent of households than among any other income group. (See Table 2.)

The CBO data do not show the effect of the recession that began in 2007. The recession is likely to lower incomes for all income groups, but if the previous recession is any guide, incomes may fall most sharply for the wealthiest households, due in large part to the severe drop in the stock market.

In the recession of 2001, the bursting of the dot-com bubble reduced inequality sharply. Real after-tax incomes of the top 1 percent fell by more than one-third between 2000 and 2002, while remaining close to flat for the middle and bottom fifths of the population, according to CBO. As a result, while in 2000 the top 1 percent had incomes 20.6 times higher than households in the middle, by 2002 their incomes were just 14.3 times higher. Nonetheless, the income gap resumed its expansion as the economy recovered, hitting a new high of 23 percent in 2006. (See Figure 2.)

Not all recessions follow this pattern, however. Inequality continued rising throughout the back-to-back recessions of the early 1980s, the CBO data show. The short- and long-term effects of the current recession will depend on the course of the stock market, trends in the labor market (including decisions about executive compensation packages, bonuses, and wages) and in the economy more broadly, and public policy choices.

Legislation enacted under the Bush Administration has provided taxpayers with about $1.7 trillion in tax cuts through 2008. These large tax reductions have made the distribution of after-tax income more unequal. Because high-income households received by far the largest tax cuts — not only in dollar terms but also as a percentage of income — the tax cuts have increased the concentration of after-tax income at the top of the spectrum.

The CBO data do not provide a direct measure of the impact of these tax policy changes because they also reflect the effects of changes in household incomes and other factors that influence tax payments. However, estimates by the Urban Institute-Brookings Institution Tax Policy Center that consider only the impact of the tax policy changes provide definitive evidence that the tax cuts have widened income inequality. As a direct result of the tax cuts enacted since 2001, the Tax Policy Center found that in 2006: [4]

Furthermore, additional tax cuts have been enacted since 2006, and some of the tax cuts enacted between 2001 and 2006 are still being phased in. The tax cuts still phasing in are heavily tilted to people at the top of the income scale; these include the temporary elimination of the tax on the nation’s largest estates and two income-tax cuts that started to take effect in 2006 and go almost exclusively to high-income households. [6]

Census income data do not include significant amounts of income received by high-income households. For instance, they ignore earnings above $1 million in order to help preserve confidentiality. If an individual makes $10 million a year, the Census records those earnings as $1 million. Partly for this reason, the Census data do not break out trends among the top 1 percent of households, where income gains may have been especially concentrated.

CBO compiles its data from a variety of sources, combining Census survey data with IRS data on the income of the very wealthy. CBO also considers a broader range of income sources than do official Census income figures, including capital gains, non-cash benefits, and employer-provided health benefits.

[1] The record income gain among households in the top 1 percent is $184,000, in 2005.  Figures throughout this paper were adjusted by CBO for inflation and are presented in 2006 dollars.

[3] In the CBO data, the income categories do not represent a fixed group of people from year to year but rather represent the people who fall into the various income categories in the year in question. As a result, the people in a given income category shift somewhat over time. This does not alter the findings of this paper but means that the trends shown in the data do not necessarily match the income trajectories of individual households.

[6] See Aviva Aron-Dine and Robert Greenstein, “Two High Income Tax Cuts Not Yet Fully in Effect Will Cost Billions Over the Next Five Years,” Center on Budget and Policy Priorities, February 1, 2007, http://www.cbpp.org/2-1-07tax.htm .

[8] The most recent tax cuts, enacted as part of the 2009 economic recovery legislation, are progressive; by targeting a larger share of relief to the lower- and moderate-income households who are most likely to spend it rather than save it, they both provide effective stimulus and are likely to counterbalance a portion of the inequality created by earlier tax cuts. However, the 2009 tax cuts are scheduled to expire after 2010. 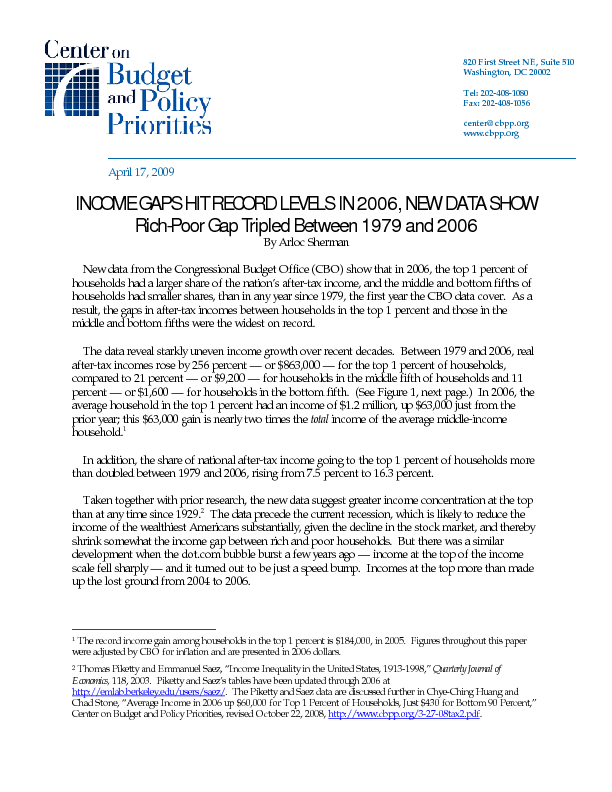