The full-year continuing resolution that the House of Representatives approved yesterday includes funding increases for the current fiscal year (2011) for three housing programs that play an important role in alleviating hardship and reducing homelessness among low-income families: the Housing Choice (“Section 8”) Voucher Program, the Section 8 Project-Based Rental Assistance program, and homeless assistance grants. The proposed increases in the level of funding for the first two programs are needed not to expand the programs but to prevent sharp reductions in the number of families assisted;[i] the additional homeless assistance funding would help local agencies respond to increases in hardship as a result of the deep, prolonged economic downturn. Funding for most other low-income housing and community development programs would remain frozen at the 2010 levels under the resolution.

The Senate is expected to consider funding legislation as early as today. Indications are that the Senate will first attempt to pass a separate “omnibus” funding bill that would include modified versions of the 12 regular funding bills that the House and Senate appropriations committees have approved.[ii] If the Senate fails to approve the omnibus, it will consider the House-passed continuing resolution described above, which would fund programs through September 30, 2011.

Should Congress fail to pass both the House resolution and Senate omnibus bill, it will be forced to revert to a third option, a temporary funding resolution that would continue to fund federal programs at 2010 levels until early next year. Under this scenario, when it acted next year Congress very likely would impose deep funding cuts in most low-income housing programs, including the three cited above, causing hundreds of thousands of low-income families to lose needed assistance. This is because the new House of Representatives would likely rewrite the appropriations bills for fiscal year 2011, using as a starting point a proposal by House Speaker-elect John Boehner to cut overall funding for nondefense discretionary programs by $101 billion, or 21 percent, below the 2010 funding levels adjusted for inflation. [iii]

Overall, the HUD budget could be cut by more than $9 billion under the Boehner proposal, in comparison to the House resolution. The potential cuts to core HUD programs are shown in Table 1. (State-by-state estimates of some of these funding reductions are provided in the appendix.)

Cuts of this magnitude would be almost certain to increase homelessness and other hardships dramatically among low-income families in states and localities across the country. The need for federal rental assistance for low-income households continues to far outpace the availability of such assistance. Only about 1 in 4 eligible low-income families receives any federal rental assistance, and the number of families in need of assistance has been growing substantially. In 2009, 5.6 million households with incomes below the poverty line — or about 60 percent of all poor renter households — paid at least half of their income for rent and basic utilities, according to the Census Bureau. That represents a 17 percent (800,000 households) rise since the last survey in 2007 and a 45 percent (1.7 million households) rise since 2003. [vi]

[i] Congress funded approximately 30,000 new housing vouchers in 2009 and 2010 to assist homeless veterans, people with disabilities, and other vulnerable families. Congress also funded thousands of additional “tenant protection” vouchers to replace public and other federally assisted housing that has been demolished or otherwise lost. Many of these vouchers must be renewed for the first time in 2011, if families are not to lose assistance, thereby increasing renewal costs in the program. In addition, the rise in voucher renewal costs reflects expected modest inflation in rents and utility costs. Similar factors are contributing to increased renewal costs in the Section 8 PBRA program.

[ii] While the details of the Senate omnibus bill are not public at this time, funding levels for the three critical programs cited above are likely to be at least as high as in the House continuing resolution. In addition, funding for other HUD programs — as well as for a wide range of education, health, and other programs administered by other federal agencies — is also likely to be higher than under the House resolution.

[iii] For an analysis of the Boehner proposal, see James R. Horney and Robert Greenstein, “Boehner Proposal Would Cut Non-Security Discretionary Programs 21 Percent, The Deepest Such Cut in Recent U.S. History,” Center on Budget and Policy Priorities, September 15, 2010. The Boehner proposal does not specify how the funding reductions would be distributed among nondefense programs. To illustrate potential cuts in particular programs under the Boehner proposal, we assumed that funding for each program would be reduce by 21 percent below the 2010 level, adjusted for inflation. Actual funding reductions could be higher or lower than these estimates, if Congress were to approve the Boehner plan.

[iv] For more information on the housing voucher program, see “Introduction to the Housing Voucher Program,” Center on Budget and Policy Priorities, May 15, 2009.

[vi] See note 5. For a typical family, housing costs consume only about a quarter of household income. The federal government considers housing unaffordable if it costs more than 30 percent of a household’s income. 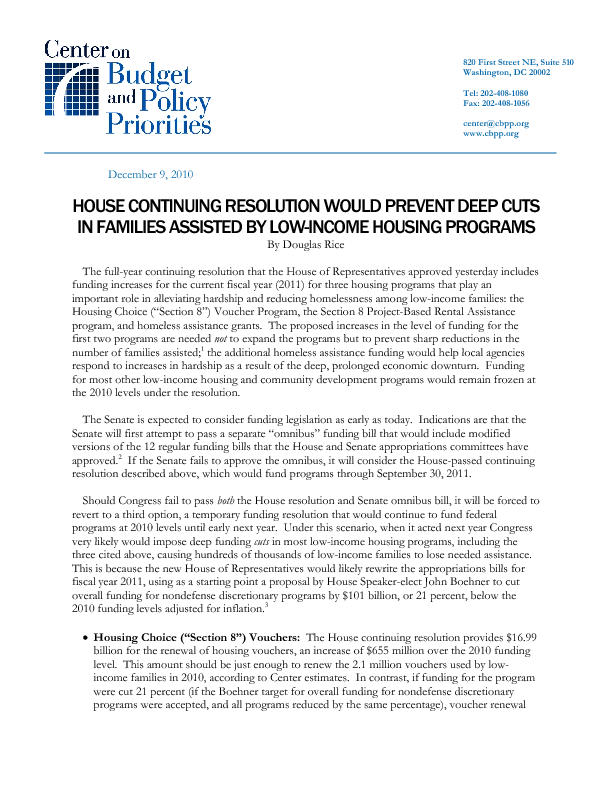