Some 157,000 at-risk children up to age 5 could lose education, health, nutrition, and other services under Head Start, while funds for Pell Grants that help students go to college would fall by nearly 25 percent, under a bill passed by the House that would cut current-year non-security discretionary funding by an average of 14.3 percent.  The bill (H.R.1), which would fund the government for the rest of fiscal year 2011, now must be considered by the Senate. [1]

H.R. 1 also would kill a program that helps low-income families weatherize their homes and permanently reduce their home energy bills, cut federal funds for employment and training services for jobless workers and for clean water and safe drinking water by more than half, and raise the risk that the WIC nutrition program may not be able to serve all eligible low-income women, infants, and children under age 5.  In addition, it would cut funds for the Centers for Disease Control and Prevention by 10 percent, for the Food and Drug Administration by 10 percent, and for the Food Safety and Inspection Service by 9 percent.

The House bill does not apply its overall 14.3 percent cut on an across-the-board basis.  Some cuts, such as the 6.0 percent reduction in funding for House of Representatives staff salaries and expenses, would be smaller.  But many important programs, including some of the ones listed above, would be cut much more to make up the difference.  (The table on the next page shows the average size of the cut for programs within the jurisdiction of each subcommittee.)

At the same time, H.R. 1 would increase overall funding for security programs (those funded by the Defense, Homeland Security, and Military Construction-Veterans Affairs appropriation bills) by a little less than 1 percent.

Also, the 14.3 percent figure is a bit deceiving.  To achieve that level of overall cuts for non-security programs for the entirety of 2011, funding for those programs will have to fall on average by nearly one-fourth over the seven remaining months of the fiscal year.  This could make it even harder for some agencies to maintain important activities than the 14.3 percent figure for all of 2011 suggests.

With these cuts, H.R. 1 threatens the ability of federal agencies to meet important needs.  This paper analyzes the impact of the proposed cuts in a cross-section of important programs.  Where possible, the paper examines the effects on program beneficiaries.  In some cases, such as Pell Grants, the paper provides the state-by-state effects of proposed cuts.   (See Appendix.)

The larger context in which the House is debating H.R. 1 is revealing as well.  This week’s debate comes just two months after December’s extension of tax cuts for high-income taxpayers that were scheduled to expire on December 31.  House Republicans now claim that the nation cannot afford to maintain the $1.1 billion in Head Start funding that could help improve lifetime opportunities for 157,000 disadvantaged children — after Republican congressional leaders insisted two months ago that we must spend scores of billions a year to provide tax cuts for the most affluent 2 percent of Americans (and threatened to end unemployment benefits for, and raise taxes on, millions of less fortunate Americans if they did not get their way).  The priorities represented by the proposed cuts in H.R. 1 and the enacted tax cuts for the wealthy are upside down.

More than a third of fiscal year 2011 (which began last October 1) has elapsed, but Congress has not yet enacted full-year appropriations.  During the lame-duck session in December, the House passed a continuing resolution that would have funded government agencies for all of 2011, with most agencies and activities funded at the same level as in 2010.  Senate Appropriations Chairman Daniel Inouye proposed an omnibus appropriation bill to provide full-year funding at levels for all programs and activities that reflected his assessment (and that of other Senate appropriators with whom he worked to develop the omnibus) of priorities in 2011.  But Senate Republicans threatened to filibuster both the House-passed continuing resolution and the omnibus bill, and the House and Senate eventually passed a continuing resolution providing funding generally at the 2010 level only through March 4.

House Republicans are capitalizing on the need to enact appropriations for the rest of fiscal year 2011 to try to impose deep cuts in discretionary funding for 2011 — to a level that then-incoming House Speaker John Boehner initially proposed last September and that House Republicans subsequently included in their “Pledge to America.”  Under it, funding for non-security programs (those not funded by the Defense, Homeland Security, or Military Construction/Veterans appropriation bills) for 2011 would be cut by about $100 billion — or more than 20 percent — below the level of funding that President Obama proposed in his 2011 budget (which was only slightly above the level that the Congressional Budget Office estimated would be required to maintain funding at the 2010 level, adjusted for inflation). [2]

The level of funding proposed in H.R. 1 for non-security programs is $66 billion below what is provided (on an annual basis) under the continuing resolution now in effect, which is already $23 billion below what the President requested.  (As noted above, H.R. 1 would slightly increase funding for security programs relative to the current funding level under the current continuing resolution.)

As noted above, the $66 billion reduction in non-security discretionary funding represents a 14.3 percent cut below what would be available for 2011 if Congress simply extended the current continuing resolution for the rest of the year, instead of letting it expire on March 4.  Since programs will have been funded at the higher continuing resolution rate for just over five months, however, the rate of funding for non-security programs will have to fall by 24.9 percent (assuming the cuts take effect on March 5) in order to reduce funding for the year by $66 billion. [4]

Squeezing the cuts into the remaining part of the fiscal year could produce significantly more severe effects on certain programs and activities than the percentage cut in funding for the entire year suggests.  For example, federal agencies that devote a large share of their discretionary funding to salaries and ongoing expenses (rather than to grants or purchases of durable equipment) will likely face particular problems.

One agency that may be adversely affected is the Social Security Administration (SSA).  H.R. 1 would cut funding for SSA operations (including funds transferred from Medicare to cover SSA activities related to Medicare) by $624 million (or 5.5 percent) below what the current continuing resolution would provide for the year — and by $1.6 billion (or 12.6 percent) below what the President requested for 2011.  The funding available for therest of the year, however, will have to fall by 9.5 percent below the current rate of funding. [5] Since virtually all SSA discretionary funding goes for salaries, personnel benefits, and the cost of ongoing activities (such as computer repairs, phone service, etc.), a 9.5 percent cut for the rest of the year will almost certainly require furloughs of personnel, temporary closing of offices, or other steps that will significantly reduce SSA’s ability to make sure that Social Security benefits are provided in a timely and accurate manner and that citizens receive the kind of assistance they deserve when questions or problems arise.

Another point worth noting: House Republicans have repeatedly described their proposal to cut non-security discretionary funding as returning such funding to the “pre-bailout, pre-stimulus” level of 2008.  This has led many people to believe that the current funding level is bloated — and can easily be cut — because it includes funding for bailouts and stimulus spending that was supposed to be temporary.  That is not true:

Since the 2010 bills did not include new stimulus funding or any bailout funding, funding available under the continuing resolution does not include either stimulus or bailout funding.  There is no current discretionary funding for bailouts or stimulus that Congress can cut to achieve the reductions proposed by House Republican leaders .

At the same time, some programs are currently operating at higher levels than current funding can sustain because they are still bolstered by funds that the Recovery Act provided in 2009.  This occurs for two reasons.  First, the Recovery Act provided that some budget authority that it made available for 2009 could remain available for obligation in subsequent years if it was not obligated in 2009.  Second, a number of programs — particularly education and related programs that states and localities operate — use such funds on a lagged basis.  For example, 2009 funding for Head Start that the Recovery Act provided and that was obligated in 2009 and 2010 is now supporting Head Start programs in the 2010-2011 school year.  The estimated total number of children enrolled in Head Start is 965,000.  Recovery Act funding supports 61,000 of them, with the remaining 904,000 enrollees funded by the 2010 appropriation.  Thus, if the 2011 appropriation remained at the same level as the new funding in the 2010 appropriation bill, enrollment in the 2011-2012 school year would drop by 61,000.  This report shows both the Head Start reduction that will result from the end of the boost from temporary Recovery Act funding and the additional 157,000 reduction in enrollment that will occur if new funding for 2011 falls by the 15 percent proposed by H.R. 1.

Note:  Unless otherwise noted, all cuts described below and in the state-by-state tables in the Appendix are cuts in fiscal year 2011 discretionary budget authority below the level that would be available if the continuing resolution currently in place were extended for the rest of fiscal year 2011.  The estimates are based on an analysis of H.R. 1 and the current continuing resolution by the Center on Budget and Policy Priorities, which is based in part on analyses of the two bills by the Congressional Budget Office.

H.R.1 contains a wide range of cuts to federal efforts to preserve public health and safety and meet other important needs.  For example, in 2011:

[1] Because it seems unlikely that differences between the House and the Senate can be ironed out quickly, the House is expected to pass legislation this week that would extend for two weeks the continuing resolution that is currently funding the government and would reduce the current funding level by $4 billion (as estimated on an annual basis).

[3] The cuts are relative to the Congressional Budget Office’s estimate of the amount requested for fiscal year 2011 in the budget the President submitted in January 2010, adjusted for the full cost of providing discretionary appropriations sufficient to fund the $4,860 basic maximum Pell Grant award the President proposed (the President had proposed Pell Grants be made mandatory).

[5] This assumes, as is likely, that about five-twelfths of the total that would have been available for the year under the current continuing resolution will have been obligated when H.R. 1 takes effect.

[6] The Center for Law and Social Policy (CLASP) has issued state-by-state estimates of the reduction in Head Start participation ( www.clasp.org/issues/in_focus?type=child_care_and_early_education&id=0295 ).  Accordingly, we have not included state-by-state Head Start figures in this paper.

[7] An earlier version of H.R. 1 cut $558 million from Special Education. An amendment on the House floor restored the funding for Special Education, but made additional cuts in other education areas.

[8] H.R. 1 also does not include any funding for the portion of the 2011-12 program year (October 2011 through June 2012) that is not in the current fiscal year, which ends September 30, 2011.  Unless subsequent appropriations are made, there will be no funding for the three formula grants for any of the 2011-12 program year.  See “ House Republican Cuts for This Year Would Hit Job Training Next Year, Too ,” Off the Charts, February 18, 2011, http://www.offthechartsblog.org/house-republican-cuts-for-this-year-would-hit-job-training-next-year-too/ . 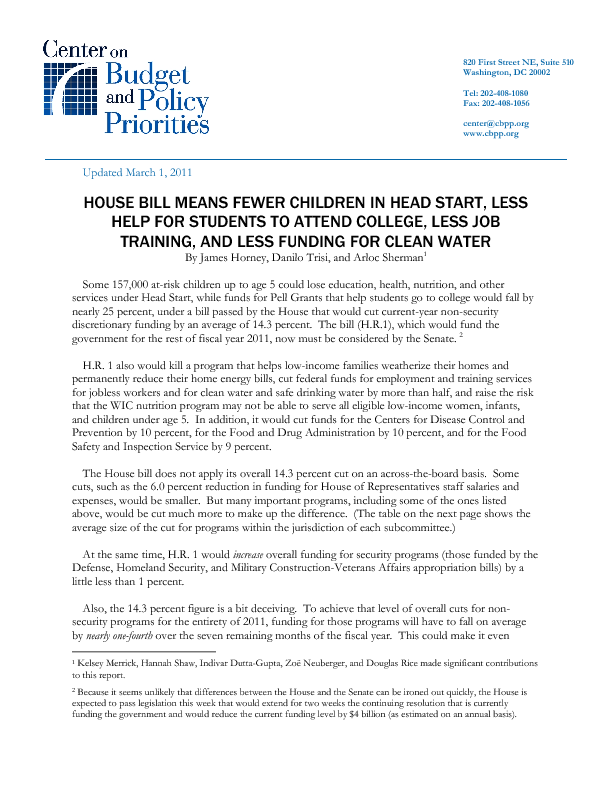 XLS of the appendix