The latest data from the federal Agency for Healthcare Research and Quality highlight the importance of the Affordable Care Act’s (ACA) Medicaid expansion in increasing insurance coverage among people with opioid-use disorders (OUD).[1] Our analysis of these data, which offer a comprehensive picture of opioid-related hospitalizations around the country, finds that the share of hospitalizations in which the patient was uninsured fell dramatically in states that expanded Medicaid: from 13.4 percent in 2013 (the year before expansion took effect) to just 2.9 percent two years later.  This steep decline indicates that many uninsured people coping with OUDs have gained coverage through Medicaid expansion. (See Figure 1.)

The need for substance use disorder (SUD) treatment, particularly as related to OUDs, is acute. A record 63,600 people died of drug overdoses in 2016, with 42,200 due to opioid use. Drug overdose death rates rose by statistically significant amounts in 27 states between 2013 and 2015 and in 34 states between 2013 and 2016, according to the Centers for Disease Control and Prevention.[2]

By itself, having a SUD isn’t considered a disabling condition under Medicaid rules, so before the ACA expanded Medicaid, low-income adults with SUDs generally didn’t qualify for Medicaid unless they also had a physical or mental health disability.  States’ recent Medicaid expansions under the ACA allow adults with incomes below 138 percent of the poverty line to enroll regardless of disability, opening the door to coverage for far more adults with SUDs.

Recently released data from the Healthcare Cost and Utilization Project (HCUP) at the Agency for Healthcare Research and Quality shed new light on how expansion affects coverage for people with OUDs. For states with available data, the HCUP provides a complete picture of opioid-use-related hospitalizations, including whether the patient was covered by Medicaid, Medicare, or private insurance or was uninsured. We analyzed these data for the states with data available from 2011 through 2015, and which either expanded Medicaid in January 2014 or had not expanded by the end of 2015. (See the methods note for details.)

These data are consistent with other evidence that Medicaid expansion is improving access to care for people with opioid use and other substance use disorders. Medicaid makes medications like buprenorphine and naloxone, which are prescribed to combat opioid use disorders, affordable for beneficiaries. Medicaid spending on prescription drug treatment for opioid use disorders more than doubled between 2011 and 2016, from $394 million to $930 million. Five states with particularly high overdose mortality rates — West Virginia, Massachusetts, Ohio, Rhode Island, and Kentucky — have also seen especially rapid growth in Medicaid spending for these drugs; all of these states are Medicaid expansion states.[5]  Evidence also suggests that Medicaid expansion improved access to substance use treatment services more broadly. After expanding Medicaid, Kentucky experienced a 700 percent increase in Medicaid beneficiaries using substance use treatment services.[6]  Use of treatment services rose nationally as well; one study found that expanding Medicaid reduced the unmet need for substance use treatment by 18.3 percent.[7]

At a recent hearing of the Senate Homeland Security and Government Reform Committee,[11] Chairman Ron Johnson claimed that Medicaid expansion contributed to the opioid crisis.[12] But the evidence doesn’t support this claim; to the contrary, as discussed above, the expansion has increased access to treatment.  And the HCUP data show that opioid-related hospitalizations have been growing — since before the expansion took effect — in both expansion and non-expansion states, and at roughly the same rate.

These results, which belie claims that Medicaid expansion has caused a disproportionate increase in OUDs, are consistent with other researchers’ analysis of drug overdose rates.[13] They are also consistent with new research from the Oregon Health Insurance Experiment. In 2008, prior to the ACA, Oregon undertook its own expansion of Medicaid to low-income adults. But because of limited funding, Oregon assigned Medicaid slots by lottery, which researchers have used as a randomized experiment to evaluate the impact of Medicaid coverage. A new study finds that those enrolled in Oregon’s Medicaid expansion program were no more likely to be prescribed opioids — or to be prescribed more opioids — than low-income adults not enrolled in Medicaid.  However, Medicaid enrollees were almost twice as likely to be prescribed treatment medications for opioid use disorder as those not enrolled, although this finding falls just short of statistical significance due to a small sample size.

Furthermore, virtually no Medicaid enrollees in Oregon possessed prescription drugs not originally prescribed to them.[14]  This is an important finding, given the serious health risks associated with prescription medication sharing; and it is especially significant in relation to opioids, given the concern that opioid prescription sharing is prevalent.[15]

Of course, some people enrolled in Medicaid have received inappropriate opioid prescriptions.  But the problem of people receiving inappropriate opioid prescriptions is not unique to Medicaid.  It also exists with private insurers and Medicare, which experience the same challenges in implementing solutions such as improving prescription tracking, identifying providers who overprescribe medications, and researching non-opioid interventions for pain.[16] It is also important to understand that the rise in opioid-related overdose deaths is now largely due to non-prescription drugs like heroin and fentanyl.[17]

Now that more people with SUDs are eligible for Medicaid, states can significantly improve treatment for people with SUDs by improving Medicaid-covered services. Medicaid can be a sustainable funding source for providers, as opposed to capped, short-term grant funding, and states like California, Kentucky, Maryland, Massachusetts, New Hampshire, New Jersey, and West Virginia have new Medicaid initiatives for people with SUDs underway.  These states are providing services such as inpatient treatment or short-term residential treatment and innovative evidence-based services like peer supports; they also are providing wraparound supports such as housing and employment to increase the impact of treatment.  Other states, including Illinois, North Carolina, and New Mexico, are seeking federal approval for similar proposals.[18]

Among a panel of experts dealing directly with the opioid crisis — public health and law enforcement officials, policymakers, and policy experts — Medicaid expansion was among the policies consistently named as most critical for addressing the crisis.[19] Claims that Medicaid coverage has worsened the epidemic aren’t supported by the available evidence and shouldn’t deter states that have not yet expanded Medicaid from taking advantage of the opportunity to improve coverage and treatment for people struggling with opioid use and other substance use disorders.

The Agency for Healthcare Research and Quality developed the Healthcare Cost and Utilization Project (HCUP) through a collaboration with states and health industry representatives.  The result is the nation’s most comprehensive source of hospital care data.  We use the most recent available HCUP data, released in December 2017, which include consistent quarterly data for 44 states and the District of Columbia (DC) from the first quarter of 2011 through the third quarter of 2015.  Revisions to data classification were made in the fourth quarter of 2015, so data after this revision are not comparable to earlier data.

Then we classified those states with available data based on their Affordable Care Act Medicaid expansion status.  States that expanded in January 2014 compose the “Medicaid expansion group,” and states that had not expanded by October 2015 compose the “non-expansion group.”  For our main analysis, we excluded states that expanded Medicaid either before January 2014 or between January 2014 and October 2015:  Alaska, California, Connecticut, DC, Indiana, Minnesota, New Jersey, Pennsylvania, and Washington. (Data for some of these states are included in Appendix Table 1.)

Finally, we aggregated and compared relevant quarterly data over the study period for the expansion and non-expansion groups.  Our analysis of insurance coverage status of patients hospitalized for opioid-related conditions included 13 states in each group.  Our analysis of opioid-related hospitalizations per 100,000 people included 19 expansion states and 16 non-expansion states. (Because this analysis does not require data disaggregated by payer, data are available for more states.)

[3] Since the full implementation of the ACA’s health insurance coverage provisions at the beginning of 2014, overall uninsured rates have declined significantly both in states that adopted the ACA’s Medicaid expansion and those that did not, but expansion states have seen a larger decline: from 12.9 percent in 2013 to 6.5 percent in 2016, versus a drop from 17.0 percent to 11.7 percent in non-expansion states.  See Matt Broaddus, “Census Data: States Not Expanding Medicaid Lag Further on Health Coverage,” Center on Budget and Policy Priorities, September 12, 2017, https://www.cbpp.org/blog/census-data-states-not-expanding-medicaid-lag-further-on-health-coverage.

[4] Some of these newly eligible adults likely enrolled when they were hospitalized.  The ACA allows hospitals to provide presumptive eligibility to people likely to be Medicaid eligible.  Those found eligible after they complete the eligibility process can receive follow-up treatment (Section 1902(a)(47)(b) of the Social Security Act).

[6] “Substance Use and the ACA in Kentucky,” Foundation for a Healthy Kentucky, December 2016, https://www.healthy-ky.org/res/images/resources/Full-Substance-Use-Brief-Final_12_16-002-.pdf.

[9] Assistant Secretary for Planning and Evaluation, “Continuing Progress on the Opioid Epidemic: the Role of the Affordable Care Act,” January 11, 2017, https://aspe.hhs.gov/system/files/pdf/255456/ACAOpioid.pdf.

[10] See for example Benjamin D. Sommers et al., “Changes in Utilization and Health Among Low-Income Adults After Medicaid Expansion or Expanded Private Insurance,” Journal of the American Medical Association, October 2016, http://jamanetwork.com/journals/jamainternalmedicine/article-abstract/2542420. For a review of the literature, see Assistant Secretary for Planning and Evaluation, “Medicaid Expansion Impacts on Insurance Coverage and Access to Care,” Department of Health and Human Services, updated January 18, 2017, https://aspe.hhs.gov/system/files/pdf/255516/medicaidexpansion.pdf.

[16] For example, for an analysis of high rates of opioid use and long-term opioid use among people enrolled in commercial coverage, see Blue Cross Blue Shield Association, “America’s opioid epidemic and its effect on the nation’s commercially-insured population,” June 29, 2017, https://www.bcbs.com/the-health-of-america/reports/americas-opioid-epidemic-and-its-effect-on-the-nations-commercially-insured. 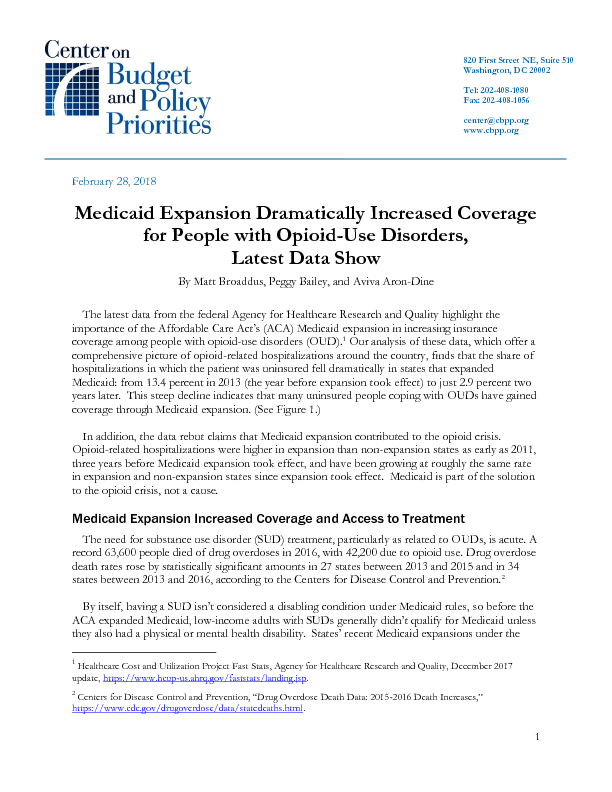