Future Medicaid Growth Is Not Due To Flaws in the Program's Design, But To Demographic Trends and General Increases in Health Care Costs

New Health and Human Services Secretary Mike Leavitt has begun discussing plans for $60 billion in Medicaid cuts over the next ten years as part of the Administration’s federal budget proposal for fiscal year 2006, which will be released on Monday, February 7. A key rationale for the effort to cut Medicaid is that the program’s costs are expected to grow faster than the general economy in the future, leading to the belief that Medicaid growth is “unsustainable.” This brief report attempts to sort out the reasons for this rise, as well as the consequences of attempting to curtail this trend without addressing its underlying causes.[1]

In short, the rise in Medicaid costs is not due to the design of the Medicaid program. Rather, it is due to two broader trends — increases in health care costs that are affecting the U.S. health care system as a whole, including the private sector, and the aging of the population. Specifically:

As this discussion indicates, meaningful relief from rising Medicaid costs rests upon broader efforts to address health care cost increases throughout the U.S. health care system and to close gaps in Medicare coverage. In the absence of such broader efforts, reductions in the federal contribution for Medicaid costs would have adverse consequences.

Such reductions would shift health care costs from the federal government to states and localities. State and local governments would then be faced with choosing between two undesirable alternatives. They could either try to maintain current health care coverage with fewer federal funds (which would compound problems in the rest of their budgets and likely lead to cuts in other programs such as education unless they raised taxes) or they could cut back on health care coverage for low-income families, seniors, and people with disabilities, and cause increases in the ranks of the uninsured and the underinsured. Federal cutbacks to Medicaid also would shift costs to health care providers to the degree that providers furnish care for which they do not receive compensation, and to low-income people to the degree that they are forced to shoulder more of their medical bills out of their poverty-level incomes and to cut back on expenditures for other items such as food.

[1] This report has also been released, in slightly altered form, as an appendix to the report, “ Cuts To Low-Income Programs May Far Exceed The Contribution Of These Programs To Deficit’s Return,” by Isaac Shapiro and Robert Greeenstein, Center on Budget and Policy Priorities, Feb. 5, 2005. Leighton Ku and Victoria Wachino also contributed to these analyses. 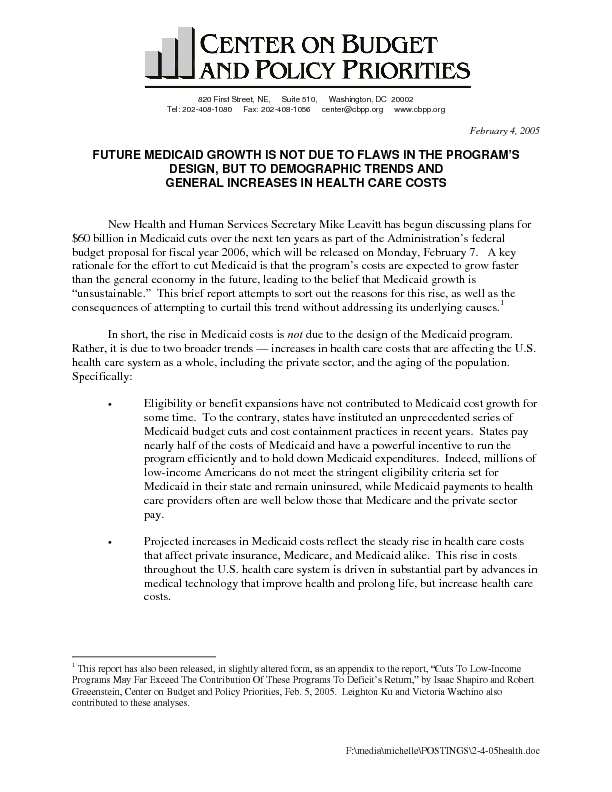