Amendment 4, which appears on the ballot in Florida in November, would lock a deeply flawed set of property tax changes into the state’s constitution, leading to tax increases for large numbers of Florida residents, a competitive disadvantage for new and emerging businesses, and significant cuts in local services — while producing little if any economic benefit.

The amendment would reduce the taxable value of certain types of property, mainly properties that are not primary residences (such as large corporations, other businesses, and part-time residences).  To a lesser extent, it would also reduce the taxable value of homes owned by first-time homebuyers, and certain properties whose market value is decreasing.  (While the property tax is a local tax, the state can restrict local governments’ ability to collect property taxes.  Amendment 4 is an example of such a restriction).

Proponents claim that Amendment 4 would boost Florida’s economy and fix key flaws in the property tax system.  These claims are off base.  In reality, the amendment would:

Amendment 4 appears on the ballot alongside another measure that poses a serious threat to local services.  Amendment 3 would place a severe limit on state revenue growth, and in so doing would very likely squeeze state aid to local governments.  Because local governments get a substantial share of their funding from the state, such cuts could punch a large hole in local budgets, precipitating significant local service cuts and tax increases.  Paired with the revenue loss from Amendment 4, the impact would be even more dramatic.

Amendment 4, slated to appear on the ballot on November 6, would place three distinct property tax changes into Florida’s constitution.  It would:

Amendment 4 would force local governments to choose between raising taxes on large numbers of year-round Florida homeowners, making deep cuts to local services, or some combination of the two.

Supporters of Amendment 4 frequently cite a study by Florida Tax Watch, a Florida research organization, as evidence that Amendment 4 would spur economic growth.  But the study suffers from a crucial methodological flaw and therefore gives an extremely optimistic estimate of Amendment 4’s likely economic impact.

Because Florida Tax Watch’s analysis of Amendment 4 ignores the impact of lost local revenue, the study’s findings — that the Amendment would create jobs and otherwise spur Florida’s economic recovery — are deeply misleading.  Indeed, Amendment 4 would more likely kill jobs in Florida and damage the state’s economy because it would result in money that would otherwise be spent paying the salaries of Florida police officers, firefighters, and librarians and more generally funding local services, flowing outside the state.

If Amendment 4 passes the only way that local governments could sustain funding for these services would be by increasing property tax rates.  Doing so would mean raising taxes on everyone in a local jurisdiction, including large numbers of Florida property owners who do not benefit from the amendment — namely, established, year-round homeowners not affected by the recapture rule.  These homeowners would essentially pay higher taxes to finance the tax cuts for the people who most benefit from the amendment:  business owners and other owners of non-homestead properties, first-time homebuyers, and owners of properties subject to the recapture rule.  As Orange County Property Appraiser Bill Donegan has said of Amendment 4, “The homeowners are going to pick up the tab.”[6]

If local governments take no action to offset the impact of Amendment 4, the amendment would drain a large and growing share of their resources.  At current property tax rates, by fiscal year 2016, Amendment 4 would cost local governments $471 million in foregone property tax revenue (see Figure 1).[7]   To put that in perspective, $471 million is enough to pay the salaries of 7,656 police officers at the state’s average annual police salary.[8]

In response to falling revenues Florida local governments have been making deep cuts to services over the last several years.  The city of Jacksonville, for example, laid off 48 police officers in 2011.[10]   Pinellas County laid off 211 employees who worked on road repair, parks, and utilities among other areas in 2010.[11]   Hillsborough County cut an afterschool program serving more than 1,800 children in 2011.[12]  An additional revenue loss from Amendment 4 would likely lead to further cuts, and make it harder for local governments to restore services as the economy recovers.

There are a number of reasons to doubt proponents’ claims that the amendment would help to revive Florida’s economy.

As the preceding section points out, any tax cuts that result from Amendment 4 would require offsetting tax increases for those who benefit least from the amendment or cuts in local services.  Either of these steps would undermine Amendment 4’s potential to spur economic growth.

To the extent that local governments raised taxes to offset the need for service cuts, this would simply shift tax liabilities from one group of taxpayers to another, doing little to boost overall demand.

Moreover, when local governments cut spending they lay off employees, cancel contracts with vendors, and eliminate or lower payments to businesses and non-profit organizations that provide direct services.  In all of these circumstances, the companies and organizations that would have received the government payments have less money to spend on salaries and supplies, and individuals who would have received salaries have less money for consumption.  This directly removes demand from the economy.

Another question on the November ballot also poses a serious threat to local services like police and fire protection.  Amendment 3 would limit annual state revenue growth to the combined rate of inflation and population growth, a formula that cannot keep pace with the normal costs of maintaining existing public services over time.  In Colorado, the only state to have tried such a formula, it led to drastic cuts in public services.  For example, between 1992, when Colorado’s limit was implemented, and 2001, Colorado fell from 35th to 49th in the country in K-12 spending as a percentage of personal income.  In November, 2005, Colorado citizens voted to suspend the formula for five years, to stanch the deluge of harmful budget cuts.*

Florida’s police and fire departments and other local services depend on state support to operate.  They get a fixed percentage of certain state revenue sources.  Such shared state revenue is providing $4 billion for local governments (including school districts) in the current fiscal year.**

By forcing steep cuts in state revenues, Amendment 3 would almost certainly erode state aid for local governments, either automatically or through a vote of the legislature.

Whether cuts to local aid result automatically or through a vote of the legislature, they would damage local budgets, precipitating significant local service cuts or local tax increases, or both.  Paired with the revenue loss from Amendment 4, their impact would be even more dramatic.

A significant share of these savings will be spent outside the state.  Many beneficiaries of the tighter assessment cap and the recapture rule will be the shareholders across the nation and around the world who own stock in large corporations, many with headquarters outside of Florida.  Others are owners of second homes, who spend much of their time and money in other places.

Some supporters of Amendment 4 claim that the cap will speed Florida’s economic recovery by providing the tax reduction and certainty that businesses need to hire new workers and expand their operations.  This claim is overstated.

Another claim from Amendment 4 supporters — that the cap will result in a flood of new investment in Florida — is also overstated.   It would, for example, do little to attract businesses from other states.  Businesses generally base their location decisions on factors like the skill of a state’s workforce and the proximity to markets and suppliers.  A tighter property tax cap will not change those fundamentals.   Total state and local taxes, including property taxes, are just 2.3 percent of overall expenses for the average corporation.[14]   Moreover, businesses typically have strong economic and social ties to their current location, making relocation very costly and limiting the chances that any tax savings resulting from a tighter assessment cap would lure a large number of businesses to Florida.

This is a consequence of the amendment’s assessment cap for businesses and other non-homestead properties.  Businesses that have just acquired property would initially get no benefit from the cap; instead, they would need to pay property taxes on the full market value of their property.  The primary beneficiaries of the cap would be established businesses that see their property’s value grow by more than 5 percent for a number of years.  For these businesses, the cap would hold their property’s taxable value below the price that the property would sell for on the open market.  Over time, the tighter cap would make it more likely that newer businesses would pay more in property taxes than their more established competitors, even if the newer and more established businesses own identical properties.

Tilting the playing field against new and expanding businesses makes little economic sense.  Much research suggests that newer companies create a disproportionate share of new jobs.[15]  For example,  firms that have just come into existence make up just three percent of total employment, but account for almost 20 percent of total job creation, according to a recent study by researchers at the University of Maryland and the Census Bureau.  Newer firms have high rates of failure, but if they survive, these firms grow more rapidly than their more established peers.[16]

Amendment 4 would make it even more difficult for newer firms to survive by requiring them to pay higher property taxes than their more established competitors.  The rapid job growth that dynamic new businesses have the potential to generate will be essential to putting Floridians back to work and growing the state’s economy over the longer term.

[4] Assessment growth for year-round owner occupied residences is currently capped at the lesser of 3 percent or the rate of inflation.

[14] For a detailed discussion of this figure, see note 4 in Michael Mazerov and Mark Enriquez, “Vast Majority of Large Maryland Corporations Are Already Subject to “Combined Reporting” in Other States,” Center on Budget and Policy Priorities, November 9, 2010. Available at

[15] See, for examply, Magnus Henrekson and Dan Johanson, “Gazelles as Job Creators: A Survey and Interpretation of the Evidence,” Journal of Small Business Economics, January 6, 2009, pp. 227-244. 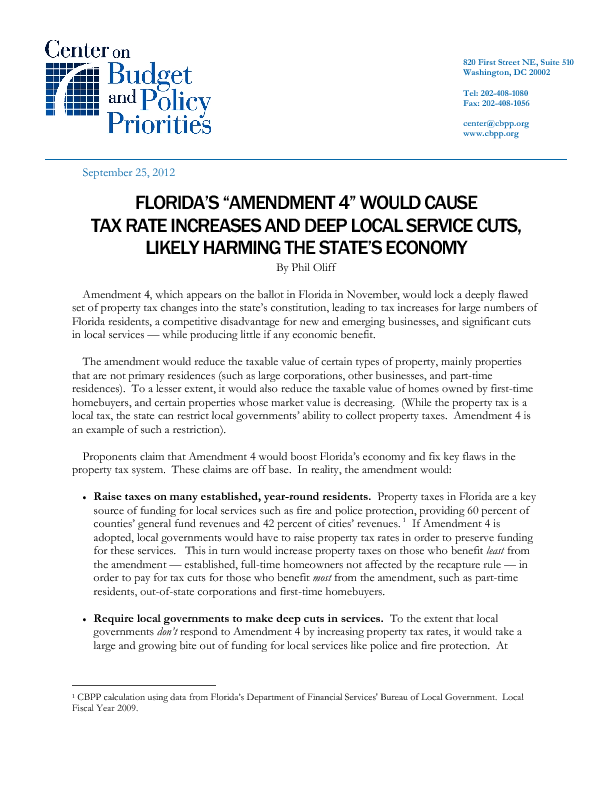