Federal Spending, 2001-2008: Defense Is a Rapidly Growing Share of the Budget, While Domestic Appropriations Have Shrunk

Both last year and this year, President Bush called for large funding increases for defense and related programs while demanding considerable restraint in domestic appropriations. And this year, like last year, he has threatened to veto appropriations bills if Congress does not adhere to his tight domestic levels.

Some may think the President’s recent attempts to squeeze domestic appropriations are being made in response to an explosion of domestic discretionary funding during his Administration’s first six years. But this is not correct: there has been no such funding explosion for domestic discretionary programs. Between fiscal year 2001 (the last year for which appropriations levels were set under President Clinton) and fiscal year 2008, funding for domestic discretionary programs has been more constrained than any other area of the budget and has shrunk both as a share of the budget and as a share of the economy. In contrast, appropriations for defense and other security-related programs have increased more rapidly than any other area of the budget — even more rapidly than the costs of the “big three” entitlement programs: Social Security, Medicare, and Medicaid.

Our findings are set forth in three tables. Each table divides the federal budget among four program areas: 1) defense, veterans, homeland security, and international affairs (i.e., defense and security programs); 2) the “big three” entitlement programs: Social Security, Medicare, and Medicaid; 3) all other mandatory or entitlement spending; and 4) domestic non-entitlement, or “discretionary,” programs. Net interest is not included in the totals because it is not a program area by itself and its costs depend entirely on cumulative debt over the last two centuries. (See the Appendix for a description of the accounting used in this analysis.)

Table 1 divides the budget pie into its four components (except interest) and shows each area as a share of the total. The table reveals that defense and related programs have grown from less than 22 percent of the non-interest budget to more than 29 percent in just seven years. All other areas are now a smaller share of the budget. The most significant reduction occurred among domestic discretionary programs, which shrank from 18.4 percent of the budget to 14.7 percent.

Table 2 compares the growth rates of the four areas of the budget. All areas of the budget cost more now than they did in 2001, as the table shows. Yet in assessing growth rates, it is always better to adjust for inflation. It is often useful to adjust for population growth as well. The latter adjustment reveals whether per-person benefit levels are rising or falling. Even for programs that do not provide cash or in-kind benefits, adjusting for a growing population reveals the extent to which an apparently growing cost is actually spread among more people. This table therefore shows: a) the nominal or unadjusted average annual growth rates of the four program areas; b) the growth rates adjusted for inflation; and c) the growth rates adjusted for both inflation and population. We find that:

What Are the Major Domestic Discretionary Programs?

Table 3 shows the four areas of the budget as a share of the economy — i.e., as a percentage of Gross Domestic Product, which is the broadest measure of the size of the economy. This measure is the best way to determine the affordability of various programs. Absent any changes in tax law, revenues generally grow at about the same rate as the economy (or slightly faster). Therefore, if programs also are growing only as fast as the economy — i.e., staying constant as a share of GDP — their growth does not put any upward pressure on revenues.

In contrast, funding for defense and related programs has been growing at an extraordinary rate. Funding for these programs has shot up by 2 percent of GDP in just seven years. To put this in perspective, it is expected to take more than two decades, from 2010 to the mid-2030s, for Social Security to grow by two percent of GDP.

In combination, the tax cuts and the increases in defense and security-related costs have caused the budget to deteriorate by 3.3 percent of GDP between 2001 and 2008.[2] By contrast, the changes over the same period in all domestic programs combined — including Social Security, Medicare, and Medicaid — have cost a little less than 0.6 percent of GDP.

It is widely understood that funding for the Iraq and Afghanistan wars, provided through “emergency” and supplemental appropriations, has contributed to the large increase in defense and security spending.[3] What is less well understood is that a large amount of that increase is the result of extremely rapid growth in regular defense funding that is unrelated to Iraq, Afghanistan, or what the Administration terms the “global war on terror.” Ongoing and routine funding for the Pentagon has increased remarkably since 2001. Even excluding the costs of the wars in Iraq and Afghanistan and the global war on terror, funding for defense and related programs has grown at an average annual rate of 4.8 percent per year since 2001, after adjusting for inflation — substantially faster than the growth in Social Security, Medicare, and Medicaid.[4] 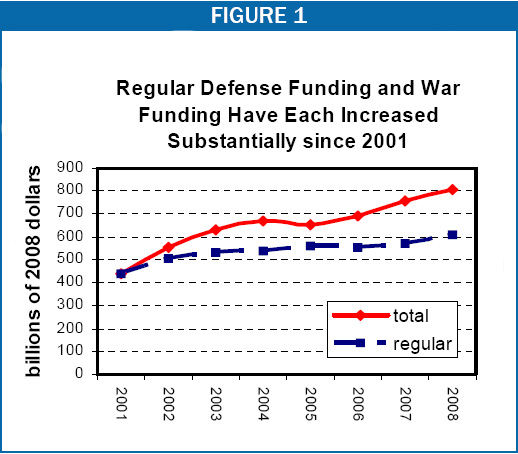 Indeed, over the period from fiscal year 2001 to fiscal year 2008, defense and other security funding unrelated to Iraq, Afghanistan, and the global war on terror has risen a cumulative 39 percent — or $170 billion — after adjusting for inflation.  This increase would reach 46 percent, or $202 billion, by 2009 under the President’s budget.  (The regular budget for these programs was $439 billion in 2001, in 2008 dollars.   The Administration has requested $642 billion for 2009.)

Despite rhetoric to the contrary, domestic discretionary programs have not been growing rapidly.  In fact, this is the only part of the budget where costs have been shrinking relative to the economy, which means these programs are not putting upward pressure on revenues.

By contrast, funding for defense and related areas has been growing far faster than any other part of the budget, much faster in fact than Social Security, Medicare, and Medicaid.  Moreover, defense remains the fastest growing area of the budget even if one excludes the costs of the wars in Iraq and Afghanistan and the global war on terror.

As noted, the figures in this analysis exclude net interest.  Net interest is not a “federal spending program” in any meaningful sense, but rather a function of past cumulative deficits and current interest rates.

The figures that we use for discretionary programs represent funding, or “budget authority,” rather than expenditures or “outlays.”  The reason we choose to use funding is that much of the public analysis of appropriations over the last seven years has been in the context of the accountability of the Bush Administration for program increases.  By using funding as our metric, the 2001 figures represent amounts signed into law by President Clinton during his last year in office, while subsequent figures represent amounts signed into law by President Bush.  This approach allows readers to compare administrations.

If, in the alternative, we had used expenditure data, the contrast would have been murkier.  The reason is that in appropriated programs, expenditures may occur years after funding has been provided.  Because of this time lag, the level of expenditures in a given year is not a full and accurate representation of the policy levels for which the Congress and President in office in that year are responsible.

In the case of funding for defense and related programs, our results would be practically identical whether we had used funding data or expenditure data.  But in the case of domestic discretionary programs, the average annual growth rate of expenditures since 2001 is about one percentage point higher than the equivalent growth rate of funding.  This difference reflects the fact that domestic discretionary funding experienced an upturn at the end of the Clinton administration, when budget surpluses emerged, and this funding upturn occurred so late in President Clinton’s term that most of it was not reflected in increased expenditures until the early years of the Bush Administration.  As a consequence, the level of expenditures for domestic discretionary programs in 2001, the last Clinton year, is significantly lower than the level of funding for these programs that Clinton signed into law.

[2] This figure is an understatement in that it counts only the direct costs of these policies; it excludes the higher debt and consequent higher interest payments that have been generated by the tax cuts and the increased defense funding.

[3] As in Tables 1 through 3, this category includes funding for defense, veterans, homeland security, and international affairs.

[5] For domestic discretionary programs, the use of funding data creates a new difficulty, however; in a number of cases, funding “scorekeeping” rules can distort the year in which a transaction is recorded, or in the case of transportation trust funds, omit the data entirely.  We have therefore adjusted the funding data to account for these scorekeeping anomalies.  For a detailed explanation of these adjustments, which we routinely undertake whenever we have sufficient information, please see the Appendix in The Omnibus Appropriations Act: Are Appropriation For Domestic Programs Out of Control? CBPP, February 1, 2004.