| By Matt Broaddus and January Angeles

Claims that states will bear a significant share of the costs of the Affordable Care Act’s (ACA) Medicaid expansion — and that this will place a heavy financial burden on states — do not hold up under scrutiny.  Congressional Budget Office (CBO) analysis indicates that between 2014 and 2022, the ACA’s Medicaid expansion will add just 2.8 percent to what states spend on Medicaid, while providing health coverage to 17 million more low-income adults and children.  In addition, the Medicaid expansion will produce savings in state and local government costs for uncompensated care, which will offset at least some of the added state Medicaid costs.

The health reform law requires states to extend Medicaid coverage to non-elderly individuals with incomes up to 133 percent of the poverty line, or about $30,700 for a family of four.  The combination of the law’s Medicaid expansion and its subsidies to make coverage affordable for people who aren’t affluent but have incomes too high to qualify for Medicaid will reduce the number of uninsured people by 33 million by 2022, according to CBO.

In short, the Medicaid expansion will significantly increase coverage at a modest cost to state Medicaid programs, and it will lower state costs for providing care to the uninsured.

Starting on January 1, 2014, the health reform law will expand Medicaid eligibility to 133 percent of the poverty line for all non-elderly citizens and individuals who have lawfully resided in the United States for more than five years, and who are not eligible for Medicare.  Millions of low-income parents and people with disabilities, and millions of non-disabled low-income adults who don’t have dependent children, will become eligible for the program.  CBO estimates that by 2022, some 17 million more individuals — most of whom are now uninsured — will have insurance through Medicaid and the Children’s Health Insurance Program (CHIP).[1]

Health reform will likely increase participation among individuals who are currently eligible for Medicaid but are not enrolled.  States will receive the regular federal Medicaid matching rate for covering these people — and CBO’s $73 billion estimate of the net increase in state Medicaid costs includes the cost of covering these individuals.[4]   The $73 billion equals a 2.8percent increase above the $2.6 trillion that states are projected to spend on Medicaid over the same timeframe in the absence of health reform (see Figure 2).

Health Reform Will Reduce Other State Costs Related to the Uninsured 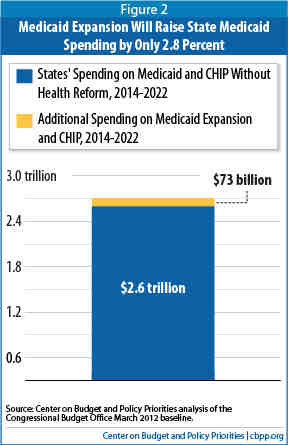 To assess the fiscal impact on states of the Medicaid expansion, one must look at more than just Medicaid, because the health reform law’s coverage expansions will reduce some state and local costs.  As a result of health reform, Medicaid will essentially pay for many health services now provided to people who are uninsured.  Thus, the federal government will bear a substantial share of the cost of providing health care services to people whose health care costs otherwise would be borne in part by state or local governments.

In addition, the health reform law allows states to extend Medicaid coverage immediately, at the state’s regular Medicaid matching rate, to low-income childless adults whom the law requires state Medicaid programs to cover starting in 2014.  States that already cover childless adults through state-funded programs — such as Minnesota, Connecticut, and the District of Columbia — have begun shifting coverage of this population to Medicaid.

Massachusetts’ experience with its health reform efforts offers evidence that expanding coverage under a comprehensive health reform plan can lead to sizeable reductions in state costs for uncompensated care.

Massachusetts enacted legislation in 2006 to provide nearly universal health care coverage.  The legislation combined a Medicaid expansion with subsidies to help low- and moderate-income residents purchase insurance, an employer responsibility requirement, and a requirement for individuals to obtain coverage.  All of these also are core elements of the Affordable Care Act.

With the expansion of affordable health insurance options and the institution of an individual mandate, spending on uncompensated care decreased significantly in Massachusetts.  As part of its health reform effort, the state replaced its Uncompensated Care Pool (also known as “Free Care”) with the Health Safety Net, which provides financial support to public hospitals and community health centers that serve low-income residents who are uninsured or underinsured or who have significant medical needs.  In 2008, the first full year of health reform implementation, Health Safety Net payments were $252 million, or 38 percent, less than the previous year’s Uncompensated Care Pool payments.a

The savings that states realize from this large reduction in the number of the uninsured should grow over time.  Experts at the Urban Institute have noted that in the absence of health reform, state uncompensated care costs would increase as employer-sponsored insurance continued to erode and the ranks of the uninsured continued to grow.[7]  By shrinking the number of the uninsured and having the federal government pick up the overwhelming bulk of the tab, health reform will ease cost pressures on states for uncompensated hospital care, mental health care, and other health care services.  Urban Institute researcher John Holahan has observed that states’ savings from no longer having to finance as much uncompensated care may become large enough to fully offset the increase in state Medicaid costs from the law’s Medicaid expansion.[8]

Health reform also will bring other benefits to states.  In addition to millions of uninsured people gaining coverage, the law’s insurance-market reforms should improve access to health insurance for people at all income levels.  The expansion of health-care coverage will also help protect residents against preventable illnesses and should result in a healthier workforce.[9]

Some critics of the health-reform law have heavily overstated the cost that various states will face as a result of the law’s Medicaid expansion.  They have cited estimates purporting to show very large increases in state Medicaid costs, but those estimates have typically been derived through the use of various highly problematic assumptions, including the following:

a Dahlia Remler and Sherry Glied, “What Other Programs Can Teach Us: Increasing Participation in Health Insurance Programs,” American Journal of Public Health, January 2003.
b Sherry Glied, Jacob Hartz, and Genessa Giorgi, “Consider It Done? The Likely Efficacy of Mandates for Health Insurance,” Health Affairs, November/December 2007.
c For a more detailed analysis of these estimates and the studies from which they are drawn, see January Angeles, “Some Recent Reports Overstate the Effect on State Budgets of the Medicaid Expansion in the Health Reform Law,” Center on Budget and Policy Priorities, October 21, 2010.
d See, for example, Gestur Davidson, Lynn Blewett, and Kathleen Call, “Public Program Crowd-out of Private Coverage: What Are the Issues,” The Synthesis Project, Robert Wood Johnson Foundation, June 2004; Lisa Dubay, “Expansions in Public Insurance and Crowd Out: What the Evidence Says,” Kaiser Family Foundation, October 1999; and Anna Sommers, Steve Zuckerman, Lisa Dubay, and Genevieve Kenney, “Substitution of SCHIP for Private Coverage: Results from a 2002 Evaluation in Ten States,” Health Affairs 26:529-537, March/April 2007.
e The Urban Institute and Kaiser Commission on Medicaid and the Uninsured estimates are based on data from Medicaid Statistical Information System (MSIS) and CMS-64 reports from the Centers for Medicare and Medicaid Services (CMS), 2010.  Data provided were for 2007.  Estimates were converted to 2009 dollars using the National Health Expenditure Survey’s estimate of the per capita growth in medical expenditures between 2007 and 2009.

Contrary to claims made by some of the health reform law’s detractors, the law’s Medicaid expansion does not impose substantial financial burdens on states.  The additional state Medicaid spending that CBO expects to result from the expansion equals 2.8 percent of what states would have spent on Medicaid in the absence of health reform.  Moreover, CBO expects the expansion to result in 17 million more people being covered, which will significantly reduce state costs for uncompensated care and related programs.  In short, the federal government will pick up the overwhelming share of the costs of the Medicaid expansion, making it a favorable deal for states.

[1] In addition to the Medicaid expansion, individuals and families who do not qualify for Medicaid and have incomes below 400 percent of the poverty line will be eligible for fully federally funded subsidies (on a sliding scale) to help them purchase private coverage through the new health care exchanges.  CBO estimates that by 2022, some 22 million individuals will have coverage through the exchanges, and nearly 80 percent of these individuals will be eligible for subsidies.

[2] States that expanded Medicaid coverage for childless adults (as well as parents) with incomes up to 100 percent of the poverty line before health care reform will receive an increase in the federal Medicaid matching rate for covering those adults.  The federal match will phase up to 90 percent in 2020 and subsequent years.

[3] CBO’s estimate of $73 billion in state costs assumes that some states will reduce benefits for some of their currently eligible populations (as prior law permitted).  CBO’s estimate also includes increased CHIP spending by states, due primarily to expected increases in state contributions as a result of the significant increase that the health reform law provides in national CHIP allotments in 2014 and 2015.  Based on our analysis, most additional state spending will be in Medicaid.

[4] When the Affordable Care Act was enacted, CBO informed congressional staff that the cost of covering the people made newly eligible for Medicaid will be substantially larger than the cost of covering already-eligible people who enroll as a result of the health reform law.  A study conducted by the Urban Institute for the Kaiser Commission on Medicaid and the Uninsured has similar findings.  See John Holahan and Irene Headen, “Medicaid Coverage and Spending in Health Reform: National and State-by-State Results for Adults at or Below 133% FPL,” Kaiser Commission on Medicaid and the Uninsured, May 2010.

[8] The Urban Institute estimates of the cost to states of the Medicaid expansion do not take into account the savings to states from no longer having to subsidize the same level of uncompensated care.  Kaiser Family Foundation, transcript for briefing on “Medicaid Expansion in Health Reform: National and State Estimates of Coverage and Cost,” May 26, 2010.

[9] Other components of the ACA would also result 9in state savings, including extending the Medicaid drug rebate that drug companies pay to drugs covered by Medicaid managed care plans.  In addition, federally funded Medicaid demonstration projects testing health care payment and delivery system changes that could improve quality of care and lower costs could produce savings for state Medicaid programs over the long-run.