As dire as the states’ fiscal condition is — with dramatic revenue downturns leading in some cases to unprecedented service cuts — evidence shows this bad situation would be substantially worse if not for federal recovery assistance.

The $787 billion American Recovery and Reinvestment Act package enacted in February included about $140 billion for states to use in various ways to help lessen the need for spending cuts, service reductions, and such other budget-balancing actions as tax increases. These funds were expected to provide states on average with about 40 percent of what they need to keep budgets in balance in the 2009, 2010, and 2011 fiscal years.

To date it appears that the funds are working as intended. They are enabling states to balance their budgets with fewer cuts in public services that would harm residents and further slow the economy.

Although the evidence is far from complete, the available information so far suggests that:

Congress included state fiscal assistance in ARRA for two reasons. One was that extensive evidence provided by economists and others made the case that helping states close their budget shortfalls was one of the best ways the federal government could strengthen the national economy. Each dollar of federal aid to states, according to Moody’s Economy.com, produces $1.36 in increased economic output — a far bigger “bang-for-the-buck” than most other forms of economic stimulus under consideration, including tax cuts.

The reasoning is straightforward. When states reduce spending, they lay off employees, cancel contracts with vendors, lower payments to businesses and nonprofits that provide services, and cut benefit payments to individuals. All of these steps lower aggregate demand in the economy, which worsens a downturn.

The second reason for state fiscal assistance in ARRA was the extent to which cuts in important services would harm residents and communities. Massive state budget shortfalls — almost certainly the largest since the Great Depression — already have led roughly three-fourths of the states to cut back on health care, assistance for seniors and people with disabilities, K-12 and higher education, and other services. With the economy worsening, revenues continuing to fall, and more Americans turning to local and state agencies for help, these shortfalls clearly were having dramatic human impacts.

ARRA’s two main streams of operating funds to states are:

The recovery act also contains smaller funding sources for states — some of which can help solve their budget problems. Examples include Byrne Grant law enforcement block grants, child care block grants, and grants through the Temporary Assistance to Needy Families program. Under some circumstances, states may use these funds to pay for services they otherwise would have cut, helping addressing their budget shortfalls.

Other major streams of funding in the recovery act that flow through state governments cannot be used to address state operating budget shortfalls. Some are specifically targeted for programs that generally lie outside of the operating budget, such as transportation and unemployment insurance. Others are designed to be passed on to local governments.

States’ Use of ARRA Funds to Balance Their Budgets

As states resolve lingering budget problems from the current fiscal year (2009) and enact new budgets for fiscal year 2010 — which in most states begins July 1 — most are using a combination of federal relief, cuts in spending, revenue increases, and such other measures as drawing down reserve funds to balance their budgets.

Although it is still too early to have a complete picture of how the funds are affecting every state’s budget, all evidence to date suggests that the money is making a substantial difference. Without the funds, the extent of budget cuts undoubtedly would be greater. A handful of concrete examples:

A Closer Look at New York and Virginia

New York and Virginia provide useful case studies of the recovery act’s impact on state budgets, for several reasons. Their projected budget shortfalls in the latter part of 2008 and early 2009 were very large relative to the size of their budgets. (New York’s was one of the nation’s largest.) Their governors’ proposed budgets, issued before Congress enacted ARRA, provide a useful snapshot of what the states might have done in the absence of the recovery act dollars. And, because they were among the first states to enact new budgets in the spring of 2009, detailed information is available showing how ARRA funds affected the budget process. In both Virginia and New York, recovery act funding is important to closing budget gaps, but it is only part of the solution.

The recession opened a wide hole in Virginia’s budget by shrinking state revenues. When enacted in June 2008, the budget for the 2009-10 biennium (i.e., the two-year period ending June 30, 2010) was in balance. But subsequent estimates showed that the state was unlikely to collect enough revenue to cover budgeted spending. By February 2009, the gap between projected revenues and expenditures had risen to $4 billion. At roughly 13 percent of the budget, the shortfall was somewhat below the national average but still sizable and difficult to close.

Virginia enacted a revised budget for 2009-10 just a few weeks after passage of the federal recovery act. The updated plan reflects the state’s decision to use $962 million in new federal Medicaid funding, $491 million from the education portion of the State Fiscal Stabilization Fund, and $24 million in Byrne Grant funds for law enforcement.

Virginia is closing the remainder of its budget gap with a combination of spending reductions, small revenue increases, and drawing down the state’s reserve fund (see Figure 1). Even with the recovery act funding, the state has cut spending substantially: the revised budget is 8 percent below the original budget for 2009-2010 and approximately 7.6 percent below the budget for 2007-2008, despite rising costs and caseloads.

Virginia plans to use approximately 71 percent of the federal Medicaid funding it expects to receive over the lifetime of the recovery act, as well as 50 percent of the education stabilization funding and about 60 percent of its Byrne Grant funding, during the 2009-2010 biennium. Most likely it will use the remainder of the recovery act funds in the next budget period (which begins July 1, 2010), although the state could use some of these funds sooner if budget conditions deteriorate further.

Prior to ARRA’s enactment, New York faced an even more precarious fiscal situation than Virginia. The crisis in the nation’s financial services industry — highly important to the state’s revenue base — and the broader economic downturn led revenues to decline sharply. New York predicted that without changes to its revenue structure or spending programs, available funds in fiscal year 2010 (the 12-month period beginning April 1, 2009) would fall about $17.9 billion or 26 percent short of what was needed to balance the budget. In addition, New York’s FY2009 budget was projected to be short $2.2 billion due to declining revenues and rising costs.[3]

To put these numbers in perspective, across two fiscal years (2009 and 2010) federal recovery assistance is closing roughly 31 percent of New York’s budget hole. A major tax increase will cover about 27 percent of the shortfall, spending reductions another 32 percent, and such one-time budget maneuvers as fund transfers the remaining 10 percent (see Figure 2).[4] 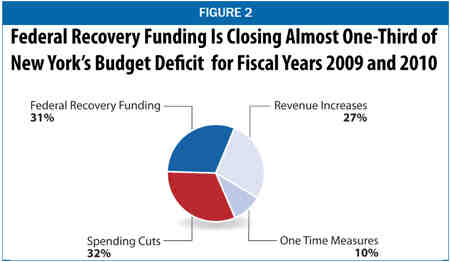 When Governor Kaine proposed a revised budget for 2009 and 2010, he did not take federal recovery act funding into account because the legislation was far from certain. Instead, he proposed deep spending cuts. A comparison of the governor’s proposal with the budget he eventually signed in March 2009 — which did reflect the recovery act — suggests the kinds of cuts the legislation allowed the state to avoid. The federal funds:

Governor Paterson, like his counterpart in Virginia, issued his budget proposal in December 2008, before the recovery act was enacted, so it did not reflect the additional federal dollars. As in Virginia, a comparison of the proposed December budget with the final budget signed in March suggests the impact of the recovery act funds. The funds:

As in Virginia, most or all of the governor’s proposed cuts would likely have become law had it not been for the federal funding. Like Virginia, New York received new revenue estimates in early 2009 indicating the 2009 and 2010 budget gaps were even worse than the governor’s budget had assumed, meaning that his proposals — severe as they were — would have been insufficient to balance the budget. As it happened, the federal recovery funds helped to avert not only many of the governor’s proposed cuts, but also likely additional cuts.

As the first state fiscal year to be seriously affected by the current devastating national recession ends and a new one — with even greater challenges anticipated — begins, federal fiscal assistance for state governments clearly is having the intended impact. Though deep cuts in vital services and programs cannot be avoided entirely, ARRA assistance has enabled states to close their large budget shortfalls with smaller cuts in education, health care, and other important services than would have occurred otherwise. This has lessened both the hardship faced by the most vulnerable residents and the damage to state economies that comes when states sharply reduce spending in a recession. Federal assistance has helped change the state budget equation for the better.

[3] The state budget is defined here as the state’s general fund plus funding for the health care reform act, which is a separate component of the state’s budget. These figures exclude federal aid.

[4] CBPP analysis of New York State Division of Budget data. The budget gap that existed prior to the federal recovery legislation and prior to enactment of the budget bill reflects the gap between projected revenues and the cost of providing current-law services. The cost of services thus reflects such items as rising need for state-financed health care programs and other rising cost factors.

[5] Specifically, the governor proposed cutting a state program that reimburses school districts for a substantial share of the cost of employing key non-teaching personnel. Given Virginia school districts’ own budget problems, it is likely that all or most of those positions would be eliminated without the state funds.

[9] The federal aid was insufficient, however, for the state to fully fund its foundation education formula, which had been enacted in 2007 to address a court decision that the state had failed to meet its legal obligation to ensure adequate education funding for all children.