Food stamp benefits average only about one dollar per person per meal (to be precise, the figure is $1.05 in 2007).  In addition, as a result of benefit cuts enacted as part of the 1996 welfare law, the purchasing power of most households’ food stamp benefits is eroding in value each year.

In 2008, food stamp benefits for a typical working parent with two children will be about $37 a month lower than they would have been without the across-the-board benefit cuts included in the 1996 law.  By 2017, the average benefit reduction from those provisions will reach almost $45 a month in 2008 dollars.  (See figure 1.)  In fact, by 2017 a typical working parent of two will, over the course of a year, miss out on more than one and a half months-worth of food stamps, compared to the amount of benefits she or he would have received under the law in place prior to 1996.  Under current rules, this lost ground will never be recovered.

What is Causing the Benefit Erosion?

The fact that food stamp benefits purchase less food is a legacy of two provisions of the 1996 welfare law.  When the 1996 law was enacted, the Congressional Budget Office estimated it would cut the Food Stamp Program by $28 billion over six years.  (Congress was using a six-year budget window at the time.)  About 40 percent of these cuts came from two provisions: a permanent freeze in the food stamp standard deduction, which CBO said would result in $5 billion in benefit cuts over the 1997-2002 period, and a three percent reduction in the Food Stamp Program’s maximum benefit, which CBO estimated would produce a benefit reduction of $6.3 billion over six years (and which resulted in a benefit cut of more than three percent for most food stamp households).[1]

Similar to federal income tax rules, the rules under which the Food Stamp Program operates allow households to subtract a “standard deduction” from their income, to reflect the basic costs of housing, utilities, transportation, and other inescapable living expenses.  The standard deduction represents a portion of household income that is not available to purchase food because it must be used for other necessities.  In the 1977 Food Stamp Act, Congress consolidated a number of deductions for specific expenses into the standard deduction.[3]

The 1996 cut to the standard deduction continues to deepen with each passing year for households with one, two, or three members, even though the budget window in effect at the time of the 1996 welfare law (fiscal years 1997 through 2002) is over.  As discussed below, because of a provision of the 2002 farm bill, households with four or more members are no longer losing ground, although most of these households still continue to have their benefits calculated using a standard deduction that is lower than it would have been under the pre-1996 rules.[4]

Reduction in the Maximum Benefit Level

The 1996 welfare law also reduced the Food Stamp Program’s maximum benefit level from 103 percent of the cost of USDA’s “thrifty” food plan (TFP) to 100 percent of the TFP.  The maximum benefit had been set at 103 percent of the cost of TFP to reflect the fact that there is a four-to-16 month lag between the month for which USDA estimates the cost of the TFP (June of each year) and the months for which the benefit levels based on that cost are in effect (the following October through September — i.e., the following fiscal year).  Because this three percent adjustment was repealed in 1996, food stamp benefits are no longer sufficient to purchase the thrifty food plan in any given month, because food stamp benefit levels reflect the cost of food in the previous June rather than current food costs.[6]

The Impact of the 1996 Cuts Depends on Household Circumstances

These two across-the-board cuts have affected nearly all food stamp households.  Households that qualify for the Food Stamp Program’s excess shelter deduction because of their high housing expenses are subject to the deepest reductions.  This is because the formula for calculating the shelter deduction magnifies the effect of the standard deduction cut.[8]

Figure 2 below shows the overall monthly benefit cut that typical households of one, two, and three persons will experience in fiscal year 2008 as a result of these cuts from the 1996 law.  (The typical food stamp household has low income and high housing expenses and therefore qualifies for the excess shelter cost deduction.)  About three-quarters of low-wage working families fall into this group. 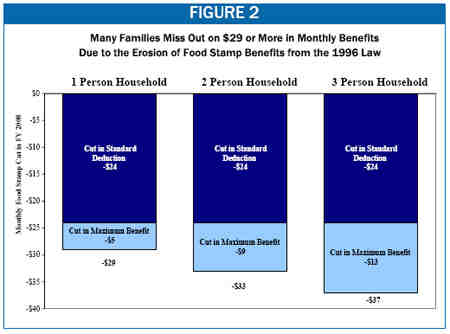 In the 2002 Farm Bill, Congress improved the standard deduction to help address the needs of larger households.  The standard deduction is now set at 8.31 percent of the federal poverty income guidelines, which vary by household size, but at not less than the $134-a-month level that has been in effect since the mid-1990s.  Varying the standard deduction by household size recognizes that larger families, which typically are families with children, incur greater expenses for necessities than smaller households do.  Food stamp households with more members also typically fall farther below the poverty line than smaller households and experience a greater degree of hardship because they must stretch their limited incomes across more people.

What Can be Done?

To restore the purchasing power of food stamp benefits, the standard deduction needs to be raised.  To restore the standard deduction fully to its pre-1996 level for all household sizes, the standard deduction would be set at $188 in 2008 and annually adjusted for inflation.  A typical household of three or fewer members would see its benefits increase by about $24 a month.  This change would cost about $1.8 billion a year, or about $9 billion over five years.  The Food Stamp Program would remain less effective in helping low-income families purchase a nutritionally adequate diet than it was prior to the 1996 law, due to the cut in the maximum benefit, but much of the lost ground would be recovered.

This level of resources, however, is not likely to be available in the 2007 farm bill.  Accordingly, two other approaches are described below, which would partially restore the value of the standard deduction, at a substantially lower cost.

The households that would be helped by this change would not regain any of the ground lost since 1996, but the real value of their food stamp benefits would stop deteriorating further with each passing year.  Almost half of the benefits from this change (45 percent) would go to families with children.  Slightly more than half would go to households with an elderly or disabled member.

The cost of this proposal would be about $2 billion over five years.[12]  Almost 60 percent of the benefits during this period would go to low-income working families, and virtually all of the benefits would go to families with children.  (Over time, households of one and two would benefit as well.)

More than ten years after enactment of the 1996 law, the cuts in food stamp benefits contained in that law continue to deepen with each passing year and to affect most food stamp households, including most of the working poor and the elderly poor.  Each year, food stamp households are able to purchase less food than the year before.

In the 2007 farm bill, Congress has the opportunity to take action to address this matter and to improve the adequacy of food stamp benefits for the nation’s neediest families.

[1] The other 60 percent of the cuts came primarily from the termination of eligibility for certain legal immigrants and most unemployed childless adults, and from a number of other, smaller provisions.  Part of the legal immigrant cut was subsequently reversed.

[2] Specifically, a household’s monthly food stamp benefits are equal to the maximum benefit for their household size (based on the cost of the thrifty food plan) minus 30 percent of the household’s net income (its gross income minus deductions).

[4] Under current rules, the standard deduction for households of six or more is $2 a month higher than it would have been under the pre-1996 rules.

[6] The Food Stamp Act requires USDA to set the maximum food stamp benefit levels for each fiscal year based on the cost of the Thrifty Food Plan in June of the previous fiscal year.

[9] Eligible households with one of two members that qualify for a monthly benefit amount of less than $10 receive a $10 benefit.

[10] Only households that receive the $10 minimum benefit are not subject to a benefit cut because of the reduction in the maximum benefit.

[11] The poverty line is also the income eligibility limit for the Food Stamp Program:  households generally must have net income (income after deductions are taken for certain expenses) at or below the poverty line.

[12] The estimated cost of the two alternatives over 10 years is the same: about $5 billion.