Speaker of the House John Boehner erroneously claims that the legislation implementing the new debt limit agreement does not allow the joint congressional committee it establishes to propose revenue increases to help reduce deficits. The legislation does no such thing. Rather, it is the speaker's adamant opposition to considering revenue increases — even the elimination of wasteful tax loopholes — as part of a deficit-reduction package that may prevent a balanced approach to reducing the deficit through a mix of program cuts and revenue increases.

The agreement calls for immediate enactment of legislation[1] that would create a two-step process to increase the debt limit and reduce the deficit.

One question that has fostered different interpretations is whether the Joint Committee can consider increases in revenues as a means of achieving its deficit-reduction target, and — more particularly — whether it can consider tax reform that would produce higher revenues than if Congress extended expiring tax provisions (such as the 2001 and 2003 Bush tax cuts, which are scheduled to expire at the end of 2012) but lower revenues than if Congress let all of those tax cuts expire.

The issue revolves around what "baseline" is used in calculating the amount of deficit reduction that the Joint Committee's recommended policy changes would produce. The standard baseline that the Congressional Budget Office (CBO) uses is a so-called "current-law" baseline, which essentially assumes that Congress will enact no changes in current laws governing entitlement programs and taxes. Thus, it assumes that tax cuts that are scheduled to expire — including "temporary" relief from the alternative minimum tax (AMT), which Congress has routinely extended for years — will all terminate on schedule.

However, an alternative baseline exists: a "current-policy" or "plausible" baseline, which assumes that Congress will extend the 2001 and 2003 tax cuts (other than those for upper-income taxpayers) and relief from the AMT. (This baseline also has some other differences from a current-law baseline.) The President's budget used this alternative baseline as a benchmark. It also served as the basis for deficit-reduction negotiations by the President's Commission on Fiscal Responsibility and Reform (the Bowles-Simpson commission), the Bipartisan Policy Center (Rivlin-Domenici) Debt Reduction Task Force, the Senate Gang of Six, and in the negotiations between the Administration and congressional leaders (the talks led first by Vice President Biden and then involving the President).

Which baseline one uses to measure deficit reduction is crucial, as the tax reform component of the Gang of Six plan illustrates. Their proposal to reduce or eliminate many tax expenditures while lowering individual income tax rates below current levels would increase revenues by $1.2 trillion relative to a "plausible" baseline that assumes extension of the 2001 and 2003 tax cuts (other than those for upper-income taxpayers) and AMT relief, but would reduce revenues by $1.5 trillion relative to CBO's current-law baseline.

Documents that Speaker Boehner circulated to his caucus yesterday claim that the legislation implementing the new debt limit agreement "requires [the] baseline to be current law, effectively making it impossible for [the] Joint Committee to increase taxes."

This claim is wrong, for two reasons. First, many tax proposals would raise revenues relative even to a current-law baseline. For instance, the President's proposals to eliminate preferential treatment of expenses for corporate jets and tax breaks for oil and gas companies would reduce the deficit relative to a current-law or "plausible" baseline. Most such "tax expenditures" are permanent and so are the same under current law and under a "plausible" baseline; reducing them would raise revenues and is clearly allowed under the proposed agreement.

Second, while it is true that tax reform of the sort that Bowles-Simpson, Rivlin-Domenici, and the Gang of Six proposed would not reduce the deficit relative to a current-law baseline, nothing in the debt limit legislation requires the use of a current-law baseline to determine how much the Joint Committee proposal reduces the deficit. Section 401(b)(3)(B)(i)(I) of the bill requires the Joint Committee's report to contain CBO's estimate of the savings that the proposal would produce. CBO's cost estimates typically reflect changes from its current-law baseline, but CBO on occasion produces estimates relative to alternative baselines if the House or Senate Budget Committees or leadership indicate that such estimates are necessary to help them enforce budget rules or targets.

In fact, CBO's estimate of the proposed debt limit legislation shows the effect of proposed discretionary spending caps relative both to its standard baseline issued in March (with adjustments to reflect the April 15 enactment of full-year 2011 appropriations) and — presumably at the request of the Budget Committees or the leadership — relative to its earlier January 2011 baseline as well. CBO's letter to Speaker Boehner that included its estimate of his July 25 debt limit plan explicitly stated that the comparison to the January baseline was included because "Your staff indicated that this comparison would be useful."

In short, the debt limit legislation does not require changes in tax law to be scored relative to a current-law baseline. The Joint Committee, the Congress, and the President are free to determine that savings should be calculated relative to a current-policy or plausible baseline, which would show tax reform of the sort proposed by the Gang of Six as reducing rather than increasing the deficit.

It is not the terms of the new agreement, but rather the opposition of Speaker Boehner (who has promised to appoint to the Joint Committee only members who will refuse to consider any revenue increases) and other Republican leaders, that threatens to prevent the Joint Committee from considering a balanced approach to deficit reduction.

[2] Some programs, such as Social Security, are exempt from the across-the board cuts. Also, the savings from any deficit-reduction measures that Congress enacts pursuant to the Joint Committee process would count toward that $1.2 trillion target, reducing the needed automatic cuts on a dollar-for-dollar basis. 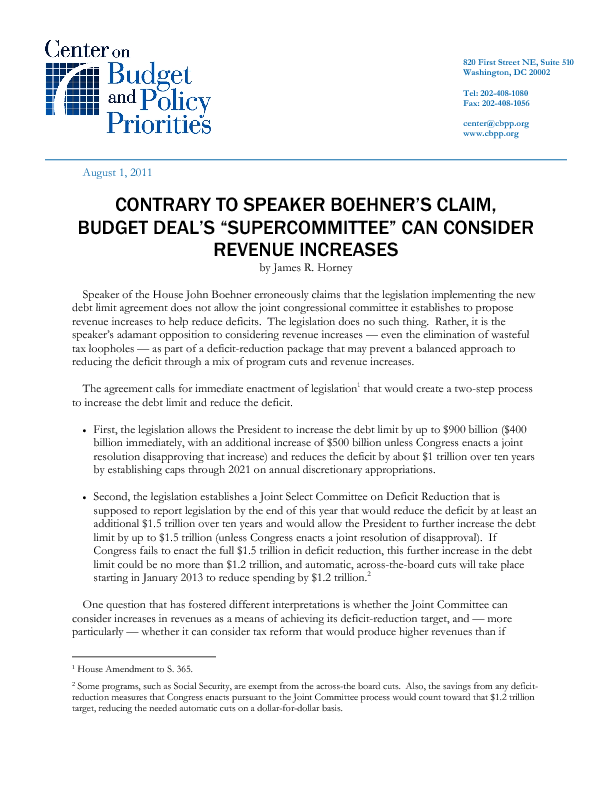