To provide context for the debate about addressing expiring tax provisions and reducing long-term deficits, we’ve collected some of our charts related to the Bush tax cuts, which show that the tax cuts (1) are costly, (2) have worsened inequality, and (3) should be allowed to expire on schedule for incomes over $250,000.

1.  The Bush Tax Cuts Are Costly

Policymakers enacted the Bush tax cuts in 2001 and 2003 and extended them in 2010; they are set to expire at the end of 2012.  As the first chart shows, the tax cuts have been a key driver of the federal deficit and will account for $4.5 trillion in deficits over the 2009-2019 period if extended.

These figures do not even include the estate tax cut, which benefits only the wealthiest 0.3 percent of estates and costs an additional $141 billion over ten years (including interest costs), according to the Office of Management and Budget.

As the third chart shows, the Bush tax cuts provide much larger benefits for high-income people than middle-income people.

The high-end tilt of the Bush tax cuts has contributed to the stunning increase in income inequality in recent decades, a trend shown in the fourth chart:

High-income households can afford to contribute more to deficit reduction, and the tax code is the principal mechanism through which they can make that contribution.

Some claim that allowing the high-income Bush tax cuts to expire would slow economic growth and job creation.  These arguments echo those made against President Clinton’s proposed 1993 tax increases, which set marginal rates at the levels to which they are set to return when the Bush rate cuts expire.  As it turned out, however, job creation and economic growth proved significantly stronger following the 1993 tax increases than following the 2001 Bush tax cuts, as the fifth chart shows.

Further, small businesses created jobs at twice the rate during the Clinton years than they did under the Bush tax code, as the sixth chart shows.

Restoring the higher rates for high-income taxpayers would not inhibit economic growth.  In fact, the economic evidence shows that if the alternative to raising taxes is larger deficits, modest tax increases on high-income households would likely be more beneficial for the economy over the long run.

A key reason why the high-income tax cuts make poor stimulus is that the economy is suffering from excess unemployment and underutilized business capacity; the most effective way to support growth is to boost demand for goods and services.  The high-income tax cuts do little of that. They benefit only about the top 2 percent of taxpayers, who (as the CBO report explains) likely spend less of each extra dollar of income they receive than low- and moderate-income taxpayers do. 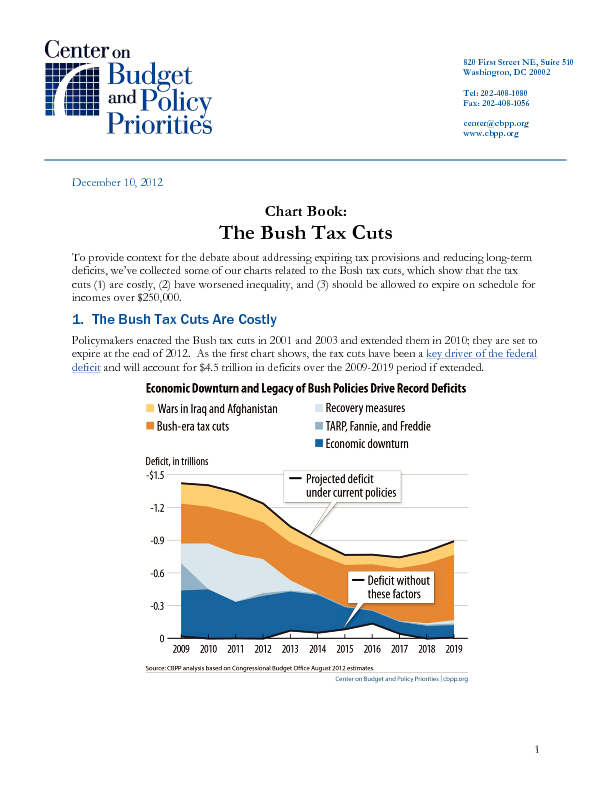