Chart Book: 10 Things You Need to Know About the Capital Gains Tax

1. Capital gains tax rates are the lowest since the Great Depression.

The capital gains rate will remain well below the top rate on salary and wages even if tax rates rise in 2013 as scheduled.  Under current law, the rate on long-term capital gains will rise from 15 to 20 percent and a 3.8 percent surtax on capital gains and other net investment income over $250,000 (for a married couple filing jointly) will take effect.  But the top marginal income tax rate will also rise, to 39.6 percent.

There is no sound evidence that cutting capital gains taxes to levels far lower than ordinary income tax rates contributes to economic growth at all — let alone enough to outweigh the significant economic cost of doing so.

One major reason is that the capital gains tax is forgiven at death, so if a taxpayer holds on to an asset until he or she dies, neither the taxpayer’s estate nor the heirs will ever pay tax on any increase in the asset’s value prior to the taxpayer’s death.  As this chart shows, unrealized capital gains (i.e., capital gains that have not been “cashed in”) make up an estimated 36 percent of the value of all estates and 56 percent of the value of estates worth more than $10 million.

4. Capital gains are highly concentrated at the top. 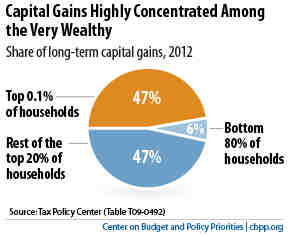 Even more striking, the latest IRS data show that in 2008, 12 percent of all capital gains went to the 400 highest-income taxpayers, whose adjusted gross incomes average roughly $202 million each.

5. The benefits of preferential tax rates for capital gains and dividends go overwhelmingly to the highest-income taxpayers. 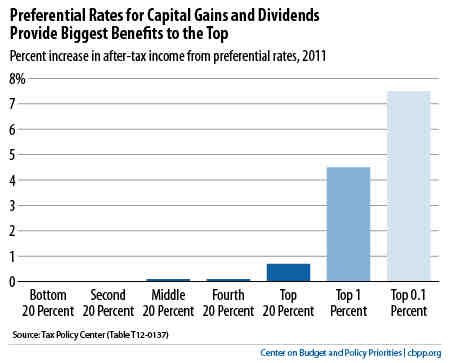 These figures reflect only the benefits of the preferential rates, not the various other tax preferences that capital gains enjoy (such as the exclusion of many capital gains from capital gains taxation altogether, as the second chart shows).

6. The 2003 cut in the capital gains rate cut was highly regressive.

7. The capital gains tax preference is a major reason why the tax code violates the Buffett rule.

The preferential rate for capital gains is a key reason why the tax system violates the “Buffett rule,” which essentially states that high-income taxpayers should not pay less of their incomes in federal taxes than middle-income Americans.  A significant group of high-income taxpayers — particularly those who derive the bulk of their income from capital investments — pay taxes at a lower rate than many middle-class families. 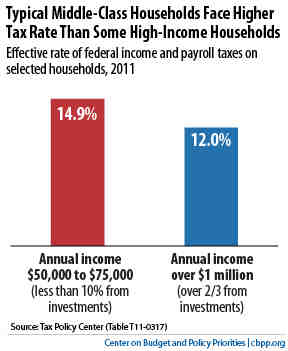 The tax breaks for capital gains are not only regressive, but unfair in another way.  Two families who have the same amount of income and are otherwise similar in their expenses and family situations may end up paying vastly different amounts of tax depending on whether they generate most of their income from wages and salaries or from tax-preferred investments.

For example, as the graph shows, households with incomes between $100,000 and $200,000 who get more than two-thirds of their income from investments taxed at the preferential rates owe an average of 5 percent of their incomes in tax.  That’s only around a quarter of the 19.2 percent rate faced by households earning the same income but who get less than 10 percent of it from these sources. 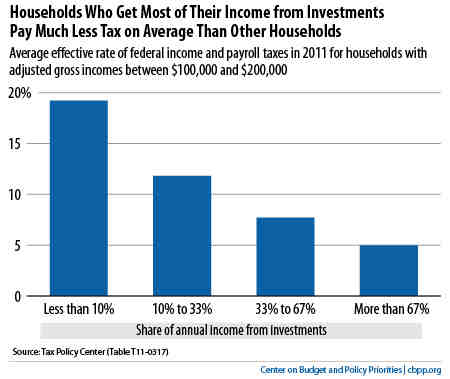 The preferential tax treatment of capital gains adds billions of dollars to deficits.  Even small steps to minimize it could contribute significantly to deficit reduction.

Letting the capital gains rate return in 2013 to 20 percent for couples with adjusted gross incomes over $250,000 ($200,000 for single filers), as the Administration has proposed, would save about $36 billion over ten years.  That’s more than the projected budget for the Food and Drug Administration over the same ten years.

If policymakers enact comprehensive tax reform, they should consider much more substantial change in this area.

10. Raising Capital Gains and Dividend Rates Would Have Little or No Impact on Most Elderly Households

Most elderly households receive little benefit from the lower tax rates for capital gains and dividends and would face little if any tax increase if those rates were raised.  TPC figures show: 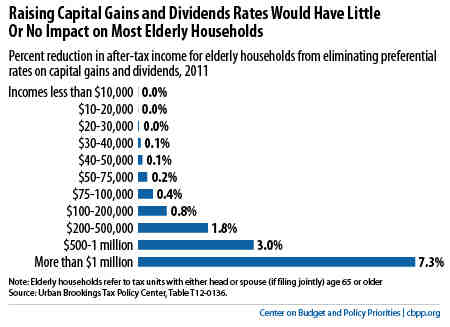 Topics:
Personal Taxes, Federal Tax, Business Taxes
Stay up to date
Receive the latest news and reports from the Center