| By Chad Stone and Chye-Ching Huang

The Piketty-Saez data has been updated. An analysis of the new data as of March 7, 2012 can be found here: http://www.cbpp.org/cms/index.cfm?fa=view&id=3697.

Average pre-tax incomes in 2006 jumped by about $60,000 (5.8 percent) for the top 1 percent of households, but just $430 (1.4 percent) for the bottom 90 percent, after adjusting for inflation, according to a new update in the groundbreaking series on income inequality by economists Thomas Piketty and Emmanuel Saez. Their analysis of newly released IRS data shows that in 2006, the shares of the nation’s income flowing to the top 1 percent and top 0.1 percent of households were higher than in any year since 1928.

Piketty and Saez’s data series on income inequality, based on IRS files, is uniquely valuable because it provides detailed information on income gains at the top of the income scale and extends back to 1913. [1] 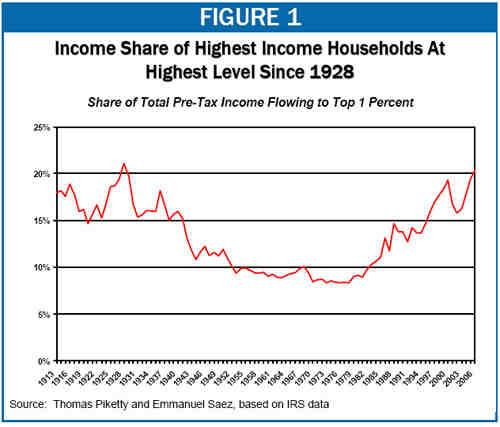 Given that the economy has undergone a significant slowdown, and given the turmoil in the financial markets, it seems possible that the income share of the top 1 percent will fall this year, and perhaps for several years after that. In this context, it is instructive to note how the distribution of income changed earlier this decade as a result of the dot.com collapse and the 2001 recession. The Piketty and Saez data show that the incomes of nearly all groups fell in 2001 and 2002. Since the incomes of those at the top of the income scale fell by the largest percentage, their share of total income in the nation declined.

[1] Piketty and Saez rely on detailed Internal Revenue Service micro-files for most years, but use more aggregated IRS data and statistical techniques to extend their series back to 1913. Their July 2008 revision incorporates the detailed micro-files for 2006 that just became available to update their earlier preliminary estimates for 2006. For details on their methods, see Thomas Piketty and Emmanuel Saez, “Income Inequality in the United States: 1913-1998,” Quarterly Journal of Economics, February 2003, or, for a less technical summary, see http://elsa.berkeley.edu/~saez/saez-UStopincomes-2006prel.pdf. Their most recent estimates are available at http://elsa.berkeley.edu/~saez/TabFig2006.xls.