An Unlimited Estate Tax Exemption For Farmland Unnecessary, Open to Abuse, and Likely to Hurt, Rather than Help, Family Farmers

There is overwhelming evidence that the estate tax has never posed a significant problem for farmers.  According to the Congressional Budget Office, only 1,659 farmers nationwide owed any estate tax in 2000, when the estate tax exemption stood at just one-third of its current level.[1]  Some 1,521 of these estates — or 92 percent of them — had liquid assets that exceeded their estate tax bill, meaning they could not have needed to sell any farmland to pay the estate tax.  Moreover, the remaining 138 estates had access to additional tax relief measures designed to ease estate tax burdens for farmers (see the box on page 6).  Opponents of the estate tax have not been able to produce a single case in which a family farm had to be sold to pay the tax, even before the exemption was increased sharply in 2001.[2]

Nevertheless, advocates of estate tax repeal have turned the tax’s impact on farms into a central issue, and many on both sides of the estate tax debate have expressed interest in modifying the tax to provide still greater protection for farmers.  This desire has led some policymakers to support an unlimited estate tax exemption for all farmland.  Legislation creating such an exemption has been introduced in the Senate by Senator Ken Salazar (S. 1994) and in the House by Rep. John Salazar (H.R. 1929).  (Both bills have a number of cosponsors.)

However well intentioned, this approach to the issue of farms and the estate tax is misguided.  An unlimited estate tax exemption for farmland could easily be abused by wealthy individuals whose primary occupation is not farming.  As a result, it could lose large amounts of needed revenue.  It also could have a truly perverse effect:  it could reduce the number of family farmers and make it more difficult to keep farms within families. 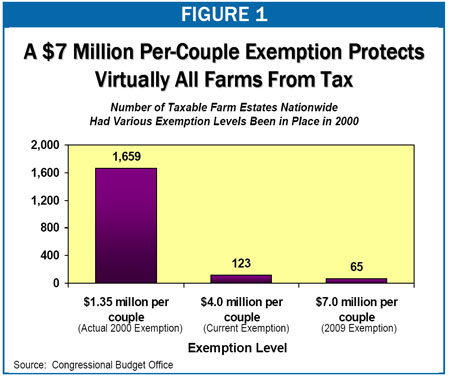 An unlimited estate tax exemption for a particular type of asset, such as farmland, creates powerful incentives for wealthy individuals to find ways to exploit the exemption.  Specifically, an unlimited exemption for farmland could create strong incentives for wealthy individuals who are not farmers to convert some of their wealth into farmland, with a series of undesirable results:

The Salazar bill attempts to avert these problems through various anti-abuse measures.  These provisions are intended to restrict the benefits of the farmland exemption to active farmers.  However, the measures are unlikely to be fully effective at preventing wealthy non-farmers from converting their assets into qualifying farmland.  Below are two examples of how the anti-abuse measures could break down; expert estate tax lawyers could almost certainly find more subtle loopholes to exploit.

It should also be noted that the anti-abuse measures included in the bill, while certainly better than no anti-abuse measures at all, would likely make filing for the farmland exemption quite complex and burdensome.  One could easily end up with the worst of all possible worlds:  genuine family farmers unwilling or unable to make use of the provision because of its complexity, while wealthier, more sophisticated individuals with skilled estate-tax lawyers take advantage of it.

(Prior to 2004, family farmers also benefited from a fifth targeted provision that bumped up the estate tax exemption for family-owned farms and businesses:  the Qualified Family-Owned Business Interest Deduction (QFOBI).  This bump-up is no longer operative because the general estate tax exemption has increased so much that it now exceeds the QFOBI exemption.)

One might wonder why, if an unlimited exemption for farmland would be subject to such abuse, other targeted provisions for farmers appear to be relatively unproblematic.  The key is that an unlimited exemption creates extremely large incentives for big estates to find ways to take advantage of it.  In contrast, a provision like special use valuation, the benefits of which are capped (or a provision like a 15-year payment of tax that allows deferral but not avoidance of tax) creates smaller incentives.  In other words, there is less incentive to abuse these provisions, and, if the provisions are abused, the revenue loss is limited.

As the Tax Policy Center analysis concludes, “an across-the-board increase in the [estate tax] exclusion can effectively exempt virtually all small farms and businesses without opening the door wide for counterproductive estate tax shelters.”[12]  Under such an approach, the estate tax would, in effect, be repealed for nearly all farmers — without their having to cope with a complicated new set of rules and without opening the door to abuse by very wealthy individuals who are not farmers and have little interest in farming.

[3] IRS data for 2005 show that 10 percent of the value of taxable estates consisted of “other real estate,” a category that includes but is not limited to farmland.   http://www.irs.gov/pub/irs-soi/05es01fyr.xls.

[4] The Joint Tax Committee estimate is for S. 34, the “Estate Tax Repeal Acceleration for Family-Owned Businesses and Farms Act,” introduced in the 108th Congress.

[5] The Congressional Research Service has estimated that non-land farm and business assets together account for a little over 10 percent of the total value of taxable estates; as noted, IRS data indicate that farmland represented less than 10 percent of the value of taxable estates in 2005.  Jane Gravelle and Steven Maguire, “Estate Taxes and Family Businesses:  Economic Issues,” Congressional Research Service, September 8, 2005.