The House and Senate are scheduled to consider the budget resolutions that their respective budget committees approved last week.  These two budgets — one drafted by House Budget Committee Chair Paul Ryan, the other by Senate Budget Committee Chair Patty Murray — offer sharply contrasting visions.[1]  Yet they are not strictly comparable because they use different sets of starting assumptions (known as budget baselines) from which to measure their policy proposals.  This analysis examines these two budgets relative to a common baseline, thereby allowing for apples-to-apples comparisons.

The Congressional Budget Office (CBO) projects budgets through 2023 based on current tax and spending law, including scheduled changes.  Recognizing that “current law” is often not a useful starting point for analysis, CBO also publishes projections of possible policy adjustments so that analysts can construct alternative baselines.  Chairman Ryan makes certain adjustments to the CBO baseline to produce his own baseline, from which he measures his remaining budget policies.  Chairwoman Murray makes a different set of adjustments to the CBO baseline.  Thus, both Chairs reject using the pure CBO current-law baseline as their starting point, so the deficit reduction figures set forth in the Ryan and Murray budget explanations are not comparable.

This analysis shows both the House and Senate plans relative to the “current-policy” baseline that we and the Committee for a Responsible Federal Budget (CRFB) jointly use (see Table 1).  Both organizations view this current-policy baseline as a reasonable and convenient starting point for analysis.  (The Appendix explains the various baselines.)

Table 2 summarizes the deficit reduction achieved since the fall of 2010, when Erskine Bowles and Alan Simpson, co-chairs of the presidential fiscal commission, and a Bipartisan Policy Center task force led by Alice Rivlin and Pete Domenici released their deficit-reduction plans.  It then shows the new amount of deficit reduction in the House and Senate plans and compares the two alternative totals.

Except where noted, figures below are relative to the CBPP/CRFB current-policy baseline.

Chairman Ryan says his plan reduces projected deficits by $4.6 trillion over the ten-year period 2014-2023.  Our analysis shows $6.2 trillion.  The difference occurs entirely because we use different starting points or baselines.  For the purpose of this analysis, we accept the numbers he specifies as his ending points (even though they are achieved in great part by unspecified policy changes).
CBPP and the Committee for a Responsible Federal (CRFB) use the same baseline because we both find it analytically sound. Specifically, the CBPP/CRFB baseline uses CBO’s estimates of revenues and spending under current law and then makes the following adjustments:[9]

In contrast to the CBPP/CRFB approach described above, Chairman Ryan’s starting point includes the first adjustment; goes even farther in assuming a war drawdown than CBO’s alternative (the second adjustment), and does not include the last three adjustments.  As a result, Chairman Ryan assumes $1.6 trillion of savings in his baseline that we and CRFB treat as deficit reduction relative to our baseline.  This is why our estimate of the deficit reduction in the Ryan budget is $1.6 trillion greater than the estimate Chairman Ryan uses.

Senator Murray’s starting point is more similar to the CBPP/CRFB approach.  It includes the first, third, fourth, and fifth adjustments listed above, although the estimate for the fifth items differs from ours by about $25 billion.  Senator Murray’s baseline goes further than the CBPP/CRFB adjustment (or than Chairman Ryan’s) in assuming a war drawdown.  As a result, Chairwoman Murray puts in her baseline $415 billion of savings that we and CRFB treat as deficit reduction relative to our baseline.

[4] Richard Kogan, “What Was Actually in Bowles-Simpson — And How Can We Compare it With Other Plans?” Center on Budget and Policy Priorities, October 2, 2012, http://www.cbpp.org/cms/index.cfm?fa=view&id=3844.

[6] See Edwin Park, “Ryan Budget Again Includes a Medicaid Block Grant That Would Add Millions to the Ranks of the Uninsured and Underinsured,” Off the Charts blog, March 15, 2013, http://www.offthechartsblog.org/ryan-budget-again-includes-a-medicaid-block-grant-that-would-add-millions-to-the-ranks-of-uninsured-and-underinsured/.

[9] We published our baseline assumptions in Appendix I of Richard Kogan, Robert Greenstein, and Joel Friedman, “$1.5 Trillion in Deficit Savings Would Stabilize the Debt over the Coming Decade,” Center on Budget and Policy Priorities, February 11, 2013, http://www.cbpp.org/cms/index.cfm?fa=view&id=3900.  CRFB published the same baseline assumptions in “CRFB’s Realistic Baseline,” at http://crfb.org/crfbs-realistic-baseline. 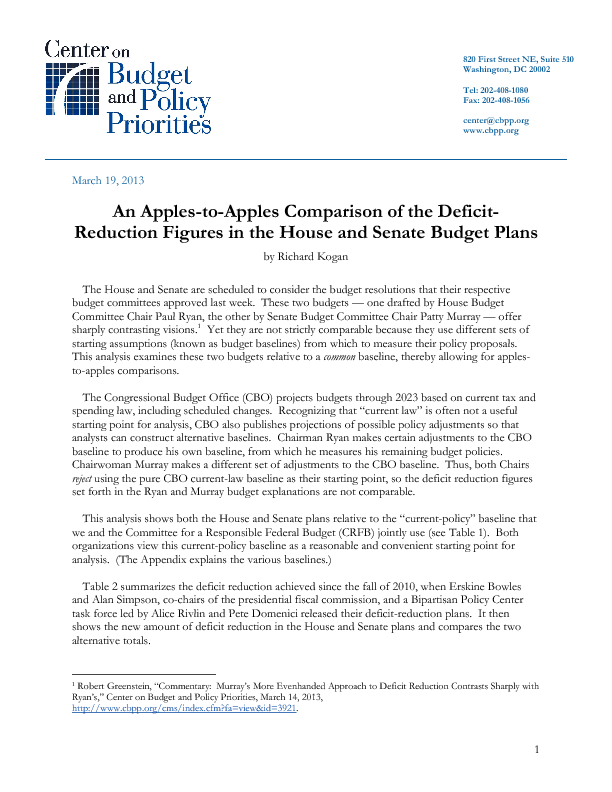