House Speaker John Boehner’s new budget proposal would essentially require, as the price of raising the debt ceiling again early next year, a choice between deep cuts in the years immediately ahead in Social Security and Medicare benefits for current retirees, repeal of health reform’s coverage expansions, or wholesale evisceration of basic assistance programs for vulnerable Americans.

The plan is, thus, tantamount to a form of “class warfare.” If enacted, it could well produce the greatest increase in poverty and hardship produced by any law in modern U.S. history.

This may sound hyperbolic, but it is not.  Both the mathematics and the politics are clear.

To be sure, the House-passed Ryan budget included much larger overall entitlement cuts over the next 10 years.  But that was largely because it eviscerated the safety net and repealed health reform’s coverage expansions.  The Ryan plan included cuts in Medicaid and health reform of a remarkable $2.2 trillion, from severely slashing Medicaid and killing health reform’s coverage expansions.  The Ryan plan also included stunning cuts of $127 billion in the SNAP program (formerly known as food stamps) and $126 billion in Pell Grants and other student financial assistance.

That House Republicans would likely seek to reach the Boehner budget’s $1.8 trillion target in substantial part by cutting programs for the poorest and most vulnerable Americans is given strong credence by the “Cut, Cap, and Balance” bill that the House recently approved.  That bill would establish global spending caps and enforce them with across-the-board budget cuts —exempting Medicare and Social Security from the across-the-board cuts while subjecting programs for the poor to the across-the-board axe.  This would turn a quarter century of bipartisan budget legislation on its head; starting with the 1985 Gramm-Rudman-Hollings law, all federal laws of the last 26 years that have set budget targets enforced by across-the-board cuts have exempted the core assistance programs for the poor from those cuts while including Medicare among programs subject to the cuts.  Moreover, the Boehner plan itself contains an across-the-board-cut mechanism, although it would not likely be used — and it makes the same regressive changes in the exemptions from those cuts that the “Cut, Cap, and Balance” bill does.  This common component of both the “Cut, Cap, and Balance” bill and the Boehner plan strongly suggests that, especially in the face of an approaching election, House Republicans looking for entitlement cuts would heavily target means-tested programs for people of lesser means (and less political power).

In short, the Boehner plan would essentially force policymakers to choose among cutting the incomes and health benefits of ordinary retirees, repealing the guts of health reform and leaving an estimated 34 million more Americans uninsured, and savaging the safety net for the poor — or letting the nation default early next year.  The plan would do so even as tax breaks, including the many lucrative tax breaks that go to the wealthiest and most powerful individuals and corporations, are protected by Boehner’s pledge that, in the highly unlikely event that the special committee proposes tax increases, House Republicans would vote down its budget package.

President Obama has said that, while we must reduce looming deficits, we must take a balanced approach.  The Boehner proposal fails this test of basic decency.  The President should veto the bill if it reaches his desk.  Congress should find a better way to avoid a default. 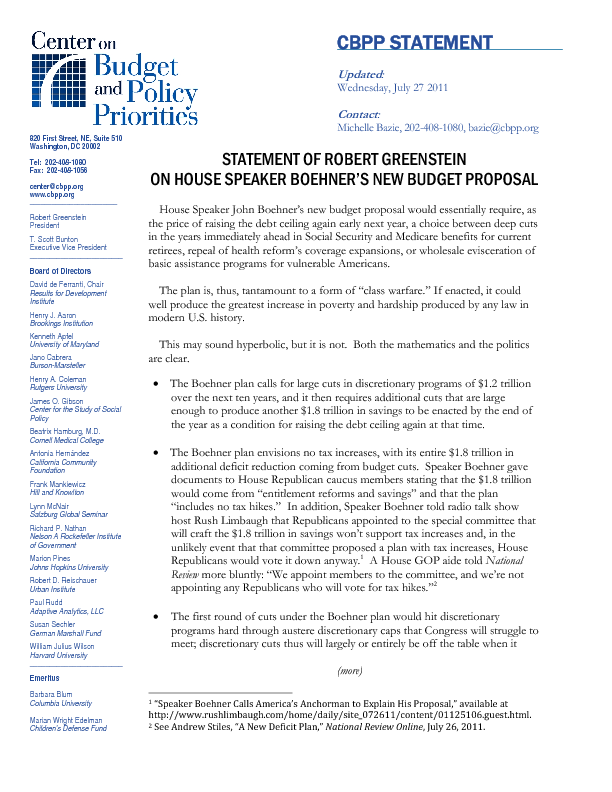