Today’s jobs report shows that the economy still faces a long and difficult climb out of the jobs hole created by the recent recession. The private sector has created, on average, fewer than 100,000 jobs a month this year — not enough to keep up with population growth and not nearly enough to reduce the unemployment rate. Worse, the pace of job creation is slowing as the economy slows, with only 64,000 private-sector jobs created in September.

The 1981-82 recession and subsequent recovery was the last to have a classic “V-shape,” with sharp job losses followed by a strong jobs recovery (see chart). Job losses were even deeper in this recession, but a strong recovery remains elusive. The last two recessions, in 1990-91 and 2001, also were followed by much slower job recoveries, and the current recovery is suffering from another protracted jobs slump as well — but with a much larger jobs deficit to erase.

In fact, a jobs recovery patterned after the 1980s experience, if it started right now, would require average job growth of more than 500,000 per month and would take 15 months (until January 2012) to boost the number of jobs in the economy back to where it was in December 2007, when the recession began. Restoring full employment would take even longer, given the growth in the nation’s population over the intervening years. Of course, no such jobs recovery is on the horizon, and it would be optimistic to hope for one even half as strong as that of the 1980s since most forecasters expect economic growth to remain sluggish this year.

This is bad news for the nearly 15 million unemployed Americans, 42 percent of whom have been looking for work for 27 weeks or longer. Even worse, the measures providing additional weeks of emergency unemployment compensation to workers who exhaust their 26 weeks of regular unemployment insurance (UI) benefits are scheduled to expire at the end of November. If policymakers let them expire, most of the roughly 500,000 people who exhaust their regular UI benefits each month will not receive any additional assistance, and many of the roughly 5 million people receiving additional emergency benefits will see their weeks cut. In addition to helping unemployed workers and their families cope with the loss of a paycheck, UI is one of the most effective forms of job-creating stimulus because UI benefits are spent quickly, providing a boost to spending that ripples through the economy.

Therefore, when Congress returns to work in mid-November, lawmakers need to extend the emergency UI measures beyond November 30. Congress has never let these temporary measures expire when the unemployment rate is as high as it is now. (The highest previous unemployment rate when emergency benefits were terminated was just over 7 percent.) Congress also needs to renew the TANF Emergency Fund, which proved highly cost-effective in providing jobs to 235,000 Americans but which Congress allowed to expire at the end of September. Failure to renew these programs will increase hardship and weaken the recovery.

About the September Jobs Report 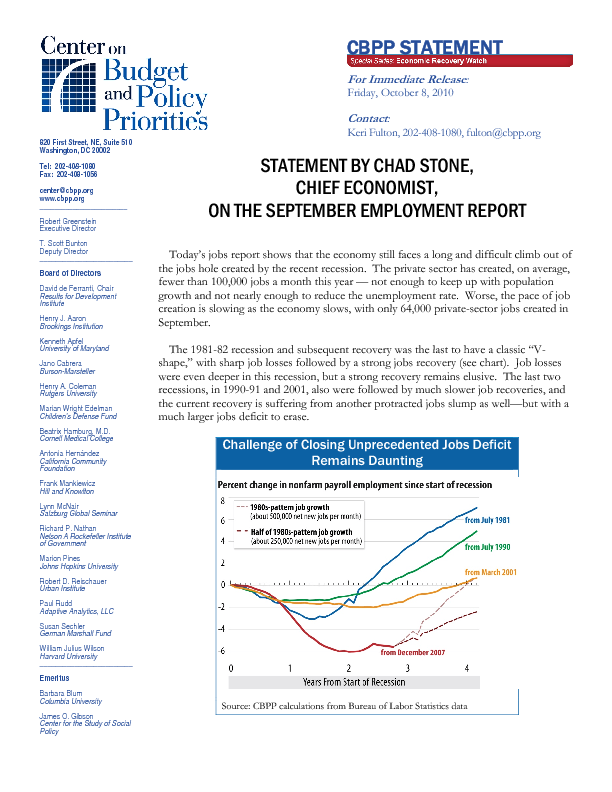