Today's employment report shows continued moderate growth in private payroll employment but a further decline in government jobs.  Thus, the overall jobs deficit remains large (see chart) and jobs remain hard to find.  The drop in the unemployment rate to 8.6 percent arises from people leaving the labor force, not from a fundamental improvement in job prospects.

Because the situation calls for aggressive federal action to boost the economy, Congress must renew the emergency unemployment insurance benefits and payroll tax cut that are set to expire at the end of this year.

Although the economy has grown for nine straight quarters and private employers have added jobs for 21 straight months, the pace of economic growth and job creation has been modest compared with the pace that's needed to restore full employment.

Policies like those proposed in the President's American Jobs Act would boost economic growth and employment significantly in 2012 and 2013, according to the Congressional Budget Office (CBO).  Indeed, the policy scoring highest in terms of bang-for-the buck in CBO's ranking of a range of policies is unemployment insurance.  Letting federal emergency unemployment benefits expire at the end of this year would not only be cruel to unemployed workers and their families, but would also weaken the recovery by reducing their capacity to buy goods and services in an economy that is already suffering from weak aggregate demand. 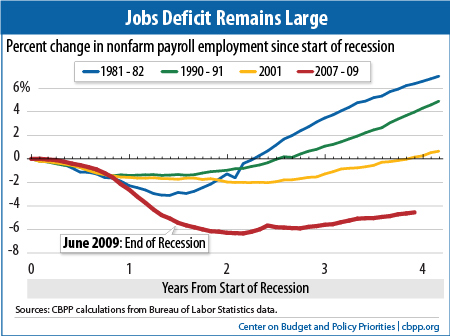 Ideally, Congress would enact a program like the President's to give the economic recovery an additional boost and increase the likelihood that we can start to see the sustained job growth of 200,000 to 300,000 jobs or more a month to make real progress in reducing the unemployment rate.  At a minimum, lawmakers must not hobble the recovery further by letting the $150 billion of purchasing power – roughly 1 percent of GDP – represented by the payroll tax cut and emergency unemployment insurance disappear from households' budgets, which will occur if they do not renew those programs.

Congress is legitimately concerned with the long-term budget deficit, but policymakers should not let that concern eclipse efforts to address the immediate problem of a huge jobs deficit.  Both Federal Reserve Chairman Ben Bernanke and CBO Director Douglas Elmendorf have testified that there is no contradiction between implementing policies to boost economic growth now and implementing policies to impose fiscal restraint that take effect several years from now, when the economy is stronger.

About the November Jobs Report

Job growth was modest in November, and the labor market remains in a deep slump.