Statement: Chad Stone, Chief Economist, on the May Employment Report

Today’s employment report should be a wake-up call to policymakers who continue to say the budget deficit is a more immediate threat to the economy than the jobs deficit.  Nearly two years after the economy technically turned the corner from recession to recovery, job growth was disappointing in May and unemployment remained high.  At the same time, interest rates are very low (see chart), indicating that financial markets are far more concerned in the near term about a sluggish recovery than about deficits, debt, or inflation.

You wouldn’t know that from the current debate in Washington, which is focused largely on the size of budget cuts that must accompany legislation to raise the federal debt ceiling in order to secure the votes of enough members of Congress.  Lawmakers must raise the debt ceiling so that the United States does not default on its obligations arising from tax and spending legislation that was previously enacted.  If implemented now, those budget cuts would drain purchasing power from the economy at a time when the recovery is already losing momentum and forecasters expect another quarter of sluggish growth. 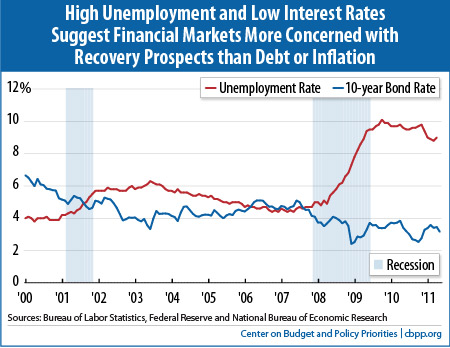 Adding insult to injury, a number of states have cut or are thinking about cutting the number of weeks of unemployment insurance (UI) they will provide to newly unemployed workers, while congressional Republicans have proposed legislation that would allow states to prematurely end federal benefits for the long-term unemployed.  UI is one of the most effective means of boosting demand in a weak economy, and cutting UI benefits will be a drag on an already flagging economic recovery.

Job growth slowed sharply in May, and other indicators show that the labor market remains in a deep slump.