PDF of this statement (2pp.)
Image

Today’s jobs report provides further evidence that the labor market has stabilized after experiencing its most severe jobs decline since the 1930s. Job losses slowed dramatically after President Obama and Congress enacted the American Recovery and Reinvestment Act in February 2009, and the growth in payroll employment in March 2010 is welcome news (see chart). Indeed, employers have added 117,000 jobs over the past five months, the report shows, which stands in marked contrast to the 3.7 million job loss over the same period a year earlier.

Before breaking out the champagne, however, we should understand that special factors, including temporary hiring for the 2010 census, were important contributors to the March gains. Moreover, we need much stronger job growth than we have yet seen over a sustained period to reduce the unemployment rate and erase the huge jobs deficit that remains the legacy of the longest and deepest recession since the Great Depression.

That is why it is so disappointing that Congress has allowed the Recovery Act measures providing extra weeks of unemployment insurance (UI) and subsidized COBRA health insurance coverage for unemployed workers to lapse and has failed to pass a meaningful jobs bill that would provide a needed boost to the nascent economic recovery. Extending the Recovery Act’s UI and COBRA provisions to the end of the year and providing additional fiscal assistance to cash-strapped states — two critical provisions in the pending congressional jobs bills — are widely recognized as highly effective ways to boost economic activity and create jobs. Congress should act quickly to pass legislation that includes those measures. They will help workers struggling to find a job and in danger of losing their UI benefits, and they will help the economy. 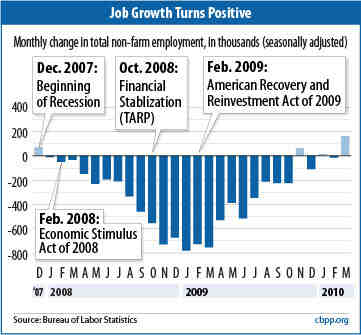 While the labor market has stabilized after a long deterioration, there are many more people looking for work than there are new jobs being created and the job market is still depressed.
Topics:
Economy