Today’s very disappointing employment report shows that two years after the technical end of the recession and after 16 straight months of private-sector job creation, the jobs deficit remains huge (see chart).  The depth of the job losses from the recession is unprecedented since the Great Depression, and the length of time it will take just to get out of the jobs hole — much less to restore full employment — will dwarf that of the sluggish jobs recovery from the 2001 recession.

It makes no sense that in an economic recovery still struggling to gain momentum, policymakers are easing up on the gas and threatening to slam on the brakes.  But that is just what is happening.

The Federal Reserve has let its program of purchasing government bonds (QE2) expire as scheduled, even though the recovery has been weaker than expected. The phasing out of the Recovery Act measures enacted in 2009 will exert a drag on economic growth, and the drag will be worse still if Congress enacts large and immediate cuts in government spending, as some members (especially House Republicans) recommend.

All this is bad news for the unemployed, over two-fifths of whom have been 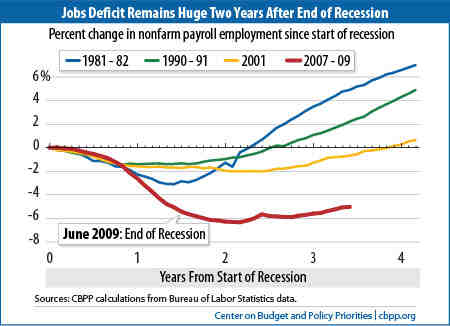 searching for work for six months or longer (much longer in many cases).  States continue to face staggering budget challenges and two states (Missouri and South Carolina) have reduced regular unemployment insurance (UI) benefits from the standard 26 weeks to just 20 weeks.  The emergency federal program providing additional weeks of UI to workers who have exhausted their regular benefits is scheduled to expire at the end of the year, even though the unemployment rate will still be much higher than it has been when similar programs enacted in past recessions have ended. The federal government has financed additional weeks of unemployment benefits in every major recession since the 1950s and the unemployment rate was never higher than 7.2 percent when they ended.

It is critically important for policymakers to raise the federal debt ceiling and put in place a program for long-term deficit reduction.  But it is equally important for them to address the jobs deficit, and to eschew policies that make the plight of job-seekers worse.

About the June Jobs Report

Job growth stalled in June, and the labor market remains in a deep slump.