Today's jobs report shows that the labor market continues to limp along rather than put people back to work.  The share of the population with a job remains severely depressed and unemployment remains alarmingly high — with more than 40 percent of the unemployment rate attributable to people who have been looking for work for six months or more (see chart).  This situation screams out for Congress to extend the federal emergency unemployment insurance (UI) programs scheduled to expire at the end of this year, and for Congress and the Federal Reserve to consider further measures to boost the flagging recovery.

Last week's report on gross domestic product (GDP) showed the recession was much deeper than previously estimated and growth in the first half of this year was very weak.  That helps explain why, despite two full years of economic growth and 17 straight months of private-sector job creation, we still have 6.8 million fewer jobs than at the start of the recession and the unemployment rate remains 4.1 percentage points higher.  The economy fell into a very deep hole and has been climbing out very slowly. 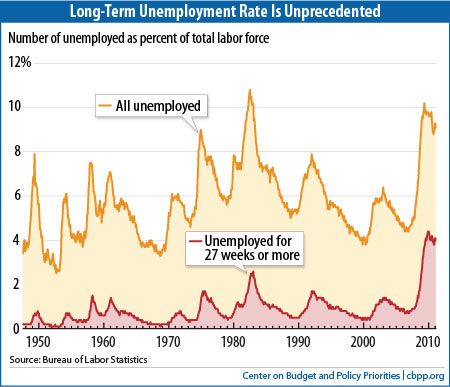 The hole would have been even deeper without the Recovery Act measures that President Obama and Congress enacted in early 2009.  The Congressional Budget Office (CBO) estimates that those measures boosted GDP by between 1.5 and 4.2 percent in 2010 and lowered the unemployment rate by between 0.7 and 1.8 percentage points.  The phaseout of those measures, however, is now exerting a drag on the recovery, and the scheduled expiration at the end of this year of last December's payroll tax cut and extension of federal emergency UI benefits will add to that drag.

This week's debt limit deal did nothing to give the recovery a needed short-run boost before longer-term deficit reduction kicks in.  Lawmakers can start to remedy that and provide needed support to workers who exhaust their 26 weeks of regular UI benefits before finding work by extending federal UI benefits for another year.  CBO and other analysts rank unemployment insurance payments as among the most effective forms of job-creating stimulus in a weak economy.  Additional temporary measures, such as extending the payroll tax cut, would provide a further boost to the recovery without jeopardizing longer-term deficit reduction.

About the July Jobs Report

Job growth increased modestly in July, but the labor market remains in a deep slump.